It would be amusing if Russia retaliated to the sanctions by asking for their money back from the Conservative Party. 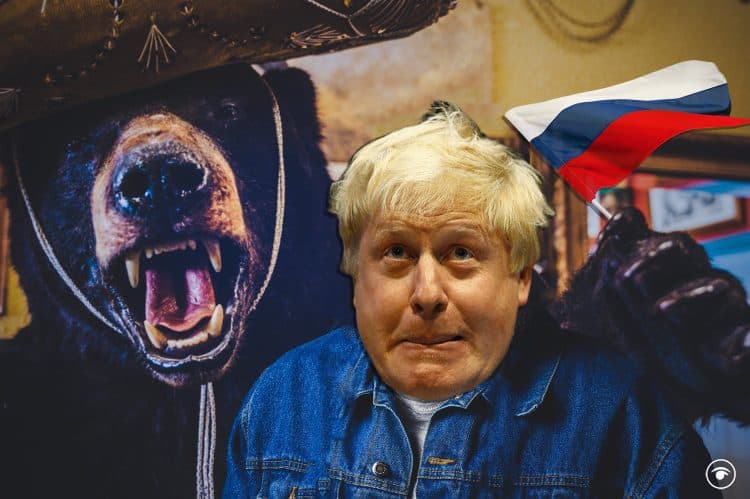 ‘Oh what a lovely war’, must be the phrase rattling through the minds of the prime minister and the leader of the opposition.

Sir Keir Starmer is revelling in the chance to talk tough and flex his muscles over Russia and terrify those commie-loving Corbynistas.

Boris Johnson just needs anything to detract attention from Partygate and, of course, he gets to dress up as a Cosplay war-time Churchill.

But what is the PM doing about Vladimir Putin and his cronies, he was asked by Starmer during today’s PMQs.

Well, it turns out he has sanctioned three people (all of whom were already under sanctions) and five banks nobody has ever heard of.  Oh and Liz Truss said English teams should boycott the Champions League final in Russia if they make it that far.

The move from stroking to tickling the Russian Bear must have left the Soviet leader in fits of laughter.

How else could we hurt Putin? Is it time to get rid of TV station Russia Today, Johnson was asked. He pointed at Nadine Dorries and her eyes lit up, as ever.

They gave the impression that they are dead set on getting rid of the much-hated state-owned broadcaster, but enough about the BBC, it looks like RT could be shut down too.

Expect to see Geroge Galloway and Alax Salmond appearing on Linkedin looking for work within the next few hours.

The inescapable fact is that the Tories have taken over £2 million since the PM came to power.

Boris Johnson played a set of tennis with the wife of Putin’s ex-minister for a £160,000 donation. It isn’t a shock about the donations, he made one of them a Lord!

So how could he get out of this one? Surely it was game, set and match?

“We do not raise money from Russian oligarchs,” he said. Failing to mention that one of the Tories biggest donors is Lubov Chernukhin, whose wealth comes from her husband Vladimir, who was secretly funded by a Russian oligarch with close ties to Putin.

The PM’s desperate response was that donors have to be on the electoral register to meet guidelines.

We have been offering golden visas to oligarchs for years, one assumes they are encouraged to get on the electoral list, when they arrive by private jet, to ensure they can funnel money into the Conservative coffers.

These mafia state plutocrats flew into London over immigrants, who would actually positively contribute to society, frantically paddling across the channel.

Ok, you could claim I’m a victim of the politics of envy, these people just have the cash you want. That could well be true. However, the government must know it was a bad idea (now) as they are getting rid of them.

Remember the Newsnight pic of Corbyn with a Russian fur hat on outside of the Kremlin? Well, the Tories have dressed up these oligarchs as Pearly Kings, and given them a throne in the corridors of power and it has left a stench.

It is a warning to us all, be careful who you invite to your house party, one of them might be sick in the sink.

And it was Ian Blackford who told the PM that ‘under the Tories, a sewer of dirty Russian money has been allowed to run through London for years.

“How can our allies trust the PM to clean up dirty Russian money in the UK if he won’t even clean it up in his own political party?” Hard to argue against that.

It would be amusing if Russia retaliated to the sanctions by asking for their money back from the Conservative Party, that would actually land a blow, unlike Johnson’s toothless plan.

The problem for the Tories is that they are so entwined with Russian money and power, they are now bound to them. Johnson knows that once we begin to hack away at the branches, they will be left hurtling to the ground, laid bare by the Russian bear.