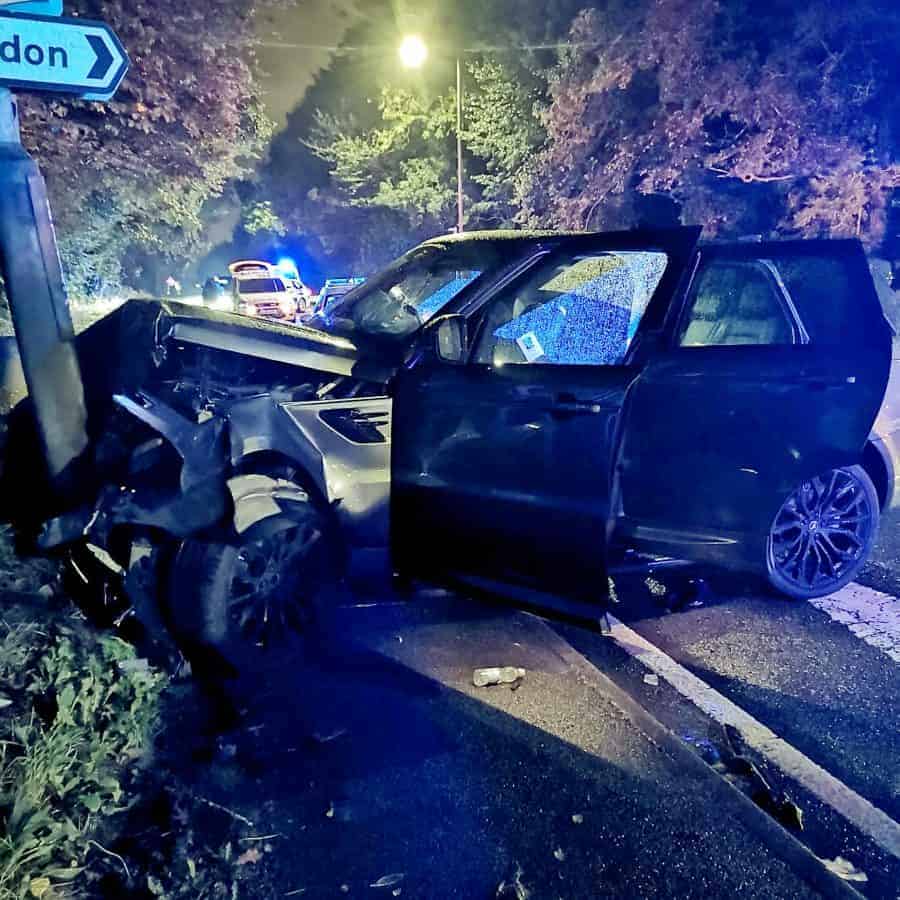 A pair of Derby County football stars have avoided jail for drink-driving following a horror car crash which left a teammate with career-threatening injuries.

Mason Bennett, 25, and Tom Lawrence, 23, were arrested following the smash which occurred after a boozy team bonding session on September 24.

JPs heard teammate Richard Keogh, 33, was knocked unconscious when Lawrence’s Range Rover ploughed into a lamppost on the A6 near Allestree, Derby.

The Rams skipper and Rep. of Ireland international was a passenger in the vehicle and suffered a season ending knee injury – while his teammates fled the mangled wreckage.

The millionaire footballers returned to the scene 45 minutes later where they were arrested by police.

A court heard striker Bennett was nearly twice the limit and blew 64 microgrammes per 100 millimetres of breath while midfielder Lawrence blew 58mg. The legal limit is 35mg

They both admitted drink-driving and failing to stop for an accident and were sentenced to a 12 months community order and told to do 180 hours of unpaid work.

District Judge Jonathan Taaffe, who had earlier warned the pair the players they faced jail, said: “There are numerous aggravating features.

“There is evidence of a unacceptable level of driving.

“He [Lawrence] left the scene knowing that they had a passenger and that they were injured. I consider that a significant aggravating factor

“The same sentence will be imposed to you both.

“You will will a receive a 12 month community order to run concurrently and carry out 180 hours of unpaid work.

“You will both be disqualified from driving for two years, your licences will be endorsed and you will attend a drink driving awareness course.”

The court heard the pair had been on a night out involving bowling and a team bonding dinner and carried on boozing at the Joiners Arms pub in Quarndon, Derbys.

Shocking video footage from the night showed Bennett vomiting in a urinal and necking drinks just hours before the crash.

Magistrates were told Bennett had drank a jägerbomb which made him sick due to “peer pressure” and had intended to get a taxi home before making the “poor decision.”

Lawrence was said to be “alcohol dependant” and had made a “gross error of judgement” to get behind the wheel of his car drunk.

Keogh was found unconscious by paramedics while an 18-year-old academy player who was also in Lawrence’s car suffered a minor facial injury.

Prosecutor Marianne Connally said Lawrence had driven into the back of Bennett’s Mercedes GLC and it “was entirely by chance there were paramedics in the area.”

She added: “The defendants left the premises at half past 11.

“At a junction there was a crash between Mr Bennett’s and Mr Lawrence’s vehicle.

“Mr Lawrence was carrying two passengers. One was treated for a minor facial injury.

“They returned to the scene 45 minutes later and cooperated with a road side breathe procedure.”

Lucy Whittaker defending Bennett, said: “Mr Bennett was stationary and he has been hit from behind.

“There is no evidence of an unacceptable level of driving.

“The defendant was socialising with team mates, bowling, and went to a pub.

“He had some drinks and a full meal.

“He had a jägerbomb which made him sick.

“A teammate bought it for him but he didn’t want it and only drank it because he felt peer pressure.

“As far as he knew there was no transport laid on by the club.

“He had intended to get a taxi but when the time came to go his team mate was distracted.

“He then made the poor decision to get into his own vehicle.

“He lives only three miles away and thought he would be fine to drive because his alcohol level would be lower after being sick.

“He stopped at a junction to turn left and he was crashed into. He didn’t know who was driving.

“He picked up a different passenger in his vehicle because he didn’t want to get him involved.

“He got a phone call from Mr Lawrence asking him to pick him up from a garage on that road.

“He did return to the scene knowing he would be breathlysed and was fully cooperative.”

Shaun Draycote defending Lawrence said: “Frank Lampard and Ryan Giggs have put their heads on the block to give their view of the Mr Lawrence they know.

“He made a gross error of judgement. That is a matter of extreme regret.

“He made an incredible decision to drive knowing he had drunk.

“He damaged a vehicle, somebody else and his reputation in a very serious way.

“What sets this apart is the level of remorse he has expressed.

“After the tragic death of his mother earlier this year, on a trip to America he found himself drinking heavily.

“He is alcohol dependent and uses alcohol to boost his confidence.”

Derby have already fined Lawrence and Bennett the maximum of six weeks’ wages and imposed 80 hours of community service as punishment.

Keogh, who suffered anterior cruciate ligament and medial collateral ligament injuries in the crash, had his first operation last week and faces 15 months on the sidelines.

In a statement following the incident, Lawrence said: “Following the events of the evening of the 24th September I wish to offer my sincere apologies to the football club; our Chairman, the manager, my teammates and all our supporters for my indiscretions that night.

“It was a total error of judgement on my part, out of character for me and I am deeply disappointed in my behaviour and upset for my teammate and our Captain Richard Keogh.

“Going forward, I will make every effort to make amends by working diligently to give something back to our local community and I will strive to repay all the faith and support I have received from everybody during my time at the club in the best way I know how, on the field of play.”

Bennett also released a statement, saying: “On the night of Tuesday 24th September, I made huge mistakes after consuming alcohol. What I did was wrong.

“Being a footballer and someone who young fans look up to I know the example I set is key. I am ashamed. At 23 I am old enough, and I was brought up, to know better.

“I understand that such actions have serious consequences. I take full responsibility for my actions and accept the punishment that the club has issued.

“I have to and will learn from these events and will strive to be a better person.

“There’s no excuse for what I’ve done. I’m sorry to my family, my friends, the club, all Derby supporters and to the wider football community, I let you all down.”