Six drivers opted not to join Lewis Hamilton and 13 others “taking the knee” before the race.

by Joe Mellor
in F1 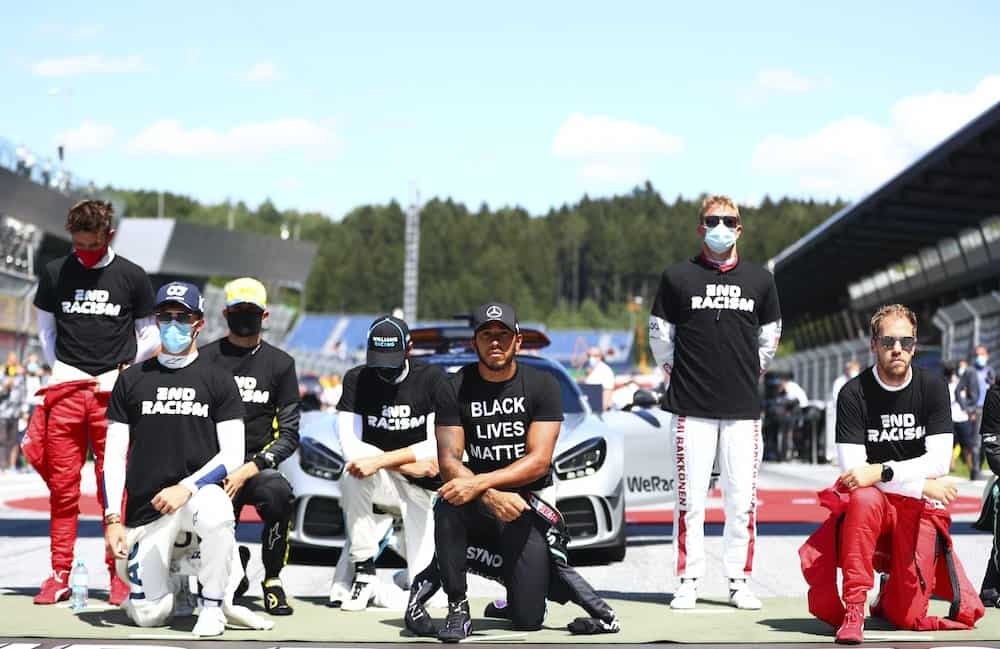 Ferrari’s Charles Leclerc and Red Bull’s Max Verstappen were among six drivers who opted not to “take a knee” before the Austrian Grand Prix.

Lewis Hamilton, who was demoted to fifth due to a three-place grid penalty, took a knee and was supported by 13 drivers.

Hamilton was the only driver to wear a special T-shirt with the message ‘Black Lives Matter’. The others carried the End Racism message instead.

Hamilton has claimed that division between his fellow drivers over the gesture, which is associated with the Black Lives Matter movement, is further proof of racism in Formula One.

“I will not take the knee but this does not mean at all that I am less committed than others in the fight against racism,” said Leclerc, the first driver to publicly confirm his position on the matter pre-race.

“I believe that what matters are facts and behaviours in our daily life rather than formal gestures that could be seen as controversial in some countries.

“All 20 drivers stand united with their teams against racism and prejudice, at the same time embracing the principles of diversity, equality and inclusion, supporting Formula 1’s and FIA’s commitment.”

Red Bull driver Max Verstappen also confirmed pre-race he would not take a knee before the season opener in Austria.

The Dutchman wrote on Twitter: “I am very committed to equality and the fight against racism. But I believe everyone has the right to express themself (sic) at a time and in a way that suits them.

“I will not take the knee today but respect and support the personal choices every driver makes.”

During a tense virtual meeting of all 20 drivers at Spielberg’s Red Bull Ring earlier this weekend, the topic of taking a knee was discussed. But the drivers failed to reach a unanimous conclusion.

The teams opted to leave their drivers to make up their own minds, while the FIA insisted it is not the job of the sporting federation to instruct the drivers on what is essentially a political decision.