Do you own a late model family saloon? Almost every aspect of it, from the body’s material, to shape, style, safety features, engine design and management system, first saw the light of day on a race track. More often than not on an F1 race car, but what is it that makes a formula one […]

by Sam Allcock
in F1, Sport 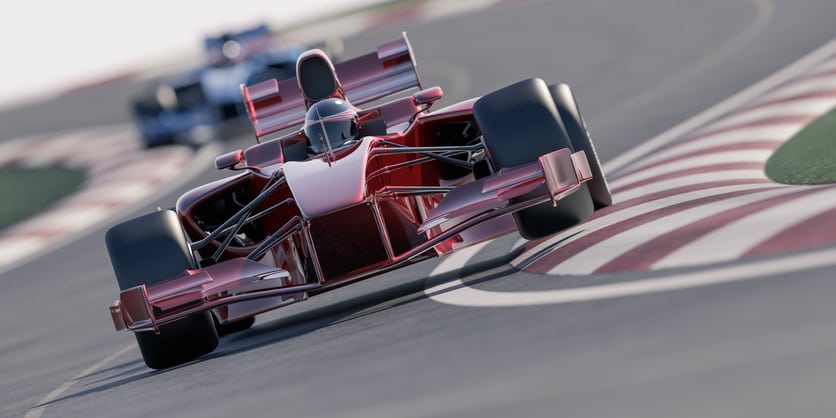 Formula one type racing cars speeding around a bend in the track. All elements are designed and modelled by myself. Very high resolution 3D render.

Do you own a late model family saloon? Almost every aspect of it, from the body’s material, to shape, style, safety features, engine design and management system, first saw the light of day on a race track. More often than not on an F1 race car, but what is it that makes a formula one car so well designed for the race track?

The short answer is because it’s designed to race. Just as your family saloon is designed to pick up the kids, collect the shopping, and get you safely from A to B. The long answer is speed alone does not make a good race car. Aerodynamics is what makes a good race car, and the best use of aerodynamics is what makes one race team more successful than another.

Aerodynamics in the race world is primarily the study of two main forces. What is the best shape and angle for front fins and rear wing to produce the downforce that sticks the vehicle’s wheels to the tarmac, and keeps it on the track during high speed cornering. And what is the best shape to minimise drag from the air as the car moves forward.

To quote James Allison, technical director of the Lotus F1 team, “Aerodynamics is the start, middle and the end of whether a car is quick.” Millions of pounds are spent annually by F1 companies on wind tunnels. Large groups of highly skilled engineers using scale models, spend countless man hours looking for ways to produce those extra few pounds of downforce. While experimenting with shapes to minimise drag and increase forward speed.

Every year, from the biggest teams to the smallest, all are given a set of body, engine and gearbox technical specifications which they have to rigorously keep to. What they manage to achieve within those specifications, will often make the difference between a successful racing season, or a back to the drawing board season.

There is little point in team A being able to tune the engine of a race car to travel 10mph quicker in a straight line, if it slides off the track when cornering at 10mph less than team B’s car. Good aerodynamics, and the driver’s skill, will have the advantage over a car which is quicker, but has poor aerodynamics.

Even if you have no inclination to become a racing driver, but fancy a whole new experience behind the wheel of a competitive kart, or the thrill of piloting an F1 car around a track, there are many famous circuits all across the world that allow driving experiences, whereby the general public can drive an F1 vehicle.

Alternatively, Go-karts have come a long way since the early days. Back in the day it was a few enthusiasts bolting lawn mower engines to the back of a kid’s soapbox.
Nowadays, with super karts capable of 150mph+, the same research in wind tunnels, using similar scale models, has to go into improving the kart’s aerodynamics, if it’s not to slide into straw bales every time it corners at speed.

Over the years many of formula one’s top drivers started their career racing at the local karting club. While club karts may not be as fast as their race bred brothers, driving one helps build the driving skills needed when behind the wheel of an F1 car.