The thought that Boris could be more gaffe-prone without her is really quite frightening. 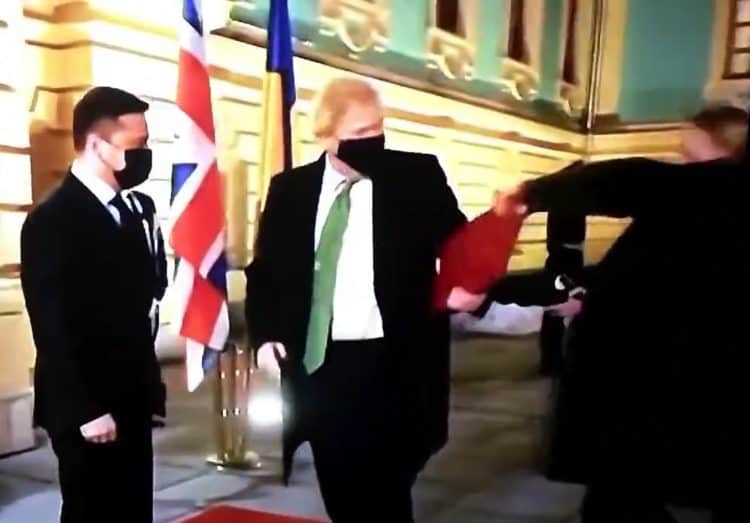 A viral clip of the prime minister getting his red folder swiped from under his arm during a photoshoot has left many questioning who his gaffe-proof aide actually is.

Boris Johnson posed for a Cold War-esque shoot with Ukrainian president Volodymyr Zelensky in Kyiv this week as tensions with Russia escalated.

He accused Vladimir Putin of effectively “holding a gun … to the head of Ukraine” as he told the Kremlin to step back from a “military disaster” – although questions remain over whether his words hold any weight as he fights his own battles closer to home.

Ahead of the shoot an aide, believed to be Shelley Williams-Walker, snatched his red folder from under his arm.

No caffeine for you

It’s not the first time she has had to intervene to protect the prime minister’s public image.

In 2019 Johnson was left red-faced after he had his coffee swiped in front of cameras at the Conservative Party Conference.

The PM was filmed being handed a brew by an aide as he passed through the conference, only to have it confiscated a moment later.

His colleague can be heard saying “no disposable cups” as she whips it from his hands, leaving the PM caffeine-less on International Coffee Day.

According to The Mace, Williams-Walker sticks like glue to Johnson when he is out and about as his head of operations.

The logistics mastermind is in charge of all the prime minister’s travel and events.

Along with confiscating his red folder and coffee cup, in June 2020, she intervened just in time to stop Johnson shaking hands with a member of the public during the coronavirus pandemic.

The thought that Boris could be more gaffe-prone without her is really quite frightening.