"What a wet response from the speaker. Something needs to change, you can't have ministers misleading the house without having to publicly correct their mistakes," said one person after Rayner returned to the House. 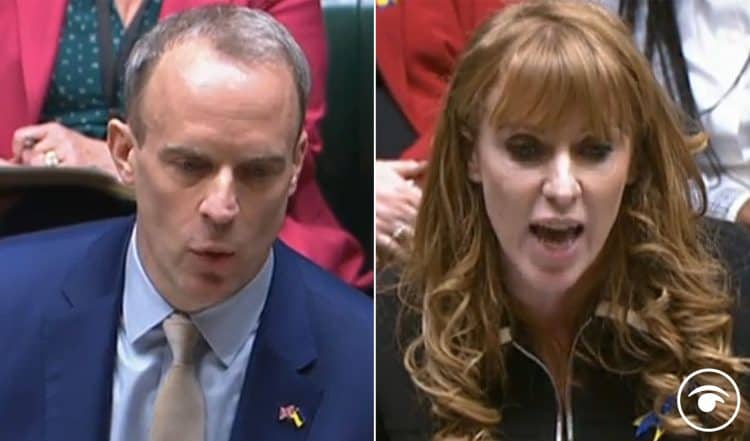 Angela Rayner has called on Dominic Raab to return to the House and correct the record following a misleading claim made during PMQs this week.

The deputy prime minister told MPs it is “sheer nonsense” to suggest that Boris Johnson had asked anyone in the security services to revise, reconsider or withdraw their assessment of Lord Lebedev during the Wednesday session.

He said: “Can I say to (Ms Rayner) what she suggests is nonsense. She’s talking about the House of Lords Appointments Commission. They have a vetting process. I have never overruled intelligence advice and I wouldn’t comment on the details of it.”

Earlier, Rayner had told the Commons: “There are now widespread reports that the Prime Minister did not accept warnings from our own intelligence services, granting a Russian oligarch, the son and business partner of a KGB spy, a seat here in this Parliament.

“There is no ifs or buts when it comes to the safety of the British people. So I ask the Deputy Prime Minister, can he guarantee that the Prime Minister never asked anyone to urge the security services to revise, reconsider or withdraw their assessment of Lord Lebedev of Hampton and Siberia?”

As well as dubbing the comments “sheer nonsense”, Rayner was also criticised for her “tone” after the session, which many have seen as blatant sexism.

Now the prime minister’s former aide, Dominic Cummings, said he was in the room when Mr Johnson was told by Cabinet Office officials that the “intelligence services and other parts of the deep state” had “serious reservations” about the PM’s plan to appoint the media mogul to the Lords.

After Cummings’ comments, Rayner then returned to the House to say that Johnson’s ex-advisor knew about the accusations and a ‘deal had been cut’ to water down the report into the Russian billionaire.

She demanded that Raab correct the record.