Emily Thornberry standing in for Labour Leader Jeremy Corbyn had MPs in stitches as she compared the Tory ministerial bloodbath over Brexit to “Reservoir Dogs remade by the Chuckle Brothers.” Theresa May’s deputy David Lidington who took Prime Minister’s Questions today squirmed as the Shadow Foreign Secretary forensically explained the inconsistencies in the Tories’ unworkable […] 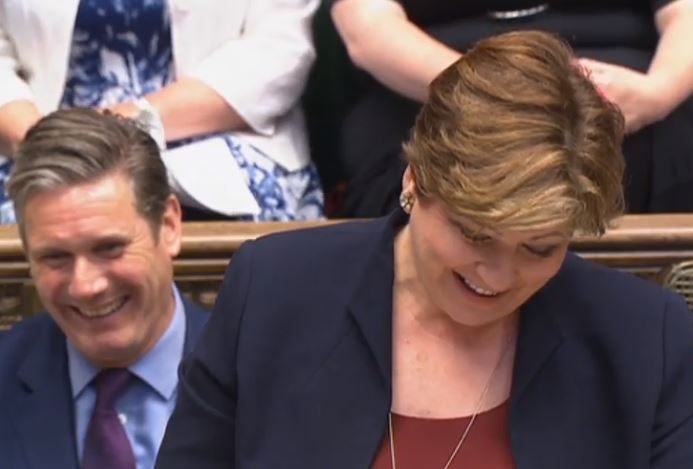 Emily Thornberry standing in for Labour Leader Jeremy Corbyn had MPs in stitches as she compared the Tory ministerial bloodbath over Brexit to “Reservoir Dogs remade by the Chuckle Brothers.”

Ahead of the England team’s World Cup semi-final clash with Croatia, the Shadow Foreign Secretary drew on a football analogy that had MPs roaring with laughter.

“I may know very little about football,” began Thornberry.

“But even I can see that England’s progress so far in the World Cup shows what can be achieved when all the individual players work effectively as a team, when there’s a clear game plan and when they’re all working together and of course when everyone respects and listens to the manager.

“What lessons could the England team teach this shambles of a government?”

But Thornberry explained how keeping Britain in the Customs Union was far more workable and attractive to countries outside the EU than Theresa May’s Chequers plan was a “total delusion”, “a customs union in all but name” but damagingly to the UK economy, not covering services. She asked why a country like China should agree to accept more UK services if the UK can’t take in more goods.

The full exchange illustrates simply why Theresa May’s Chequers Brexit compromise is being attacked from all sides – from those on the far right of her party lobbying for an extreme hard Brexit, as well as UK businesses, moderate Conservatives and those on the left of politics.

“Even Donald Trump can see they’re in turmoil – and he hasn’t even got to Britain yet,” quipped Thornberry, quoting the US President due to visit the UK in the week Foreign Secretary Boris Johns resigned as well as ministers responsible for delivering Brexit.