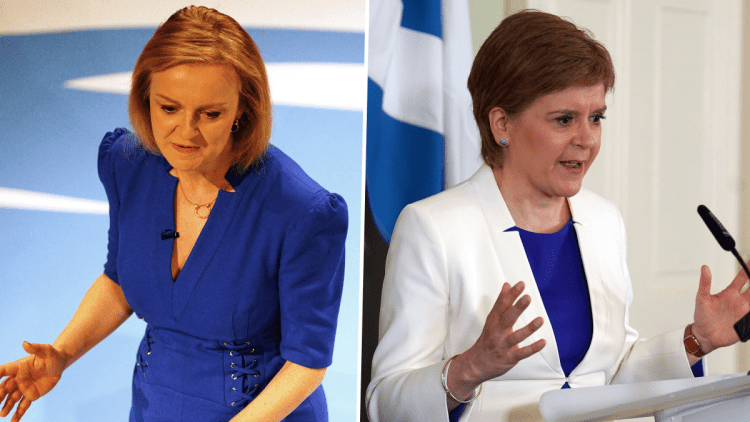 Liz Truss has claimed it is best to ignore “attention seeker” Nicola Sturgeon.

Ms Truss, speaking at a hustings event in Exeter, referenced growing up in Paisley before saying: “I feel like I’m a child of the union, I really believe we’re a family and we’re better together and I think the best thing to do with Nicola Sturgeon is ignore her.”

Tory members cheered and applauded the comment, with the Foreign Secretary adding: “She’s an attention seeker, that’s what she is.

“What we need to do is show the people of Scotland, Northern Ireland and Wales what we’re delivering for them and making sure that all of our Government policies apply right across the United Kingdom.”

She replied “no, no, no” when asked about another independence referendum in Scotland if she becomes prime minister.

He said: “People in Scotland, whatever their politics, will be absolutely horrified by the obnoxious remarks that Liz Truss has made tonight.

“I think Liz Truss has fundamentally with one, silly, intemperate intervention, fundamentally undermined the argument she tries to put forward: that Scotland, somehow, can be fairly and well treated at the heart of the United Kingdom.”

SNP MP Chris Law, posting on Twitter with a link to Ms Truss’s remarks, said: “The only reason why Scotland needs independence. Utter contempt from the future PM.”

Elsewhere at the hustings, Ms Truss declined to give details about the most embarrassing thing she has done in her life.

She said: “Honestly? My daughters will be watching this and I absolutely am not going to say.”

Asked if she is a person of faith and practises religion regularly, Ms Truss said: “I share the values of the Christian faith and the Church of England, but I’m not a regular practising religious person.”

Mr Sunak, on what he would do if not a politician, said: “If I could run Southampton Football Club, I’d be a very happy man.”