Dehenna Davison is one of the new generation of red wall Conservative MPs and a supposed leader of the ‘pork pie plot’. 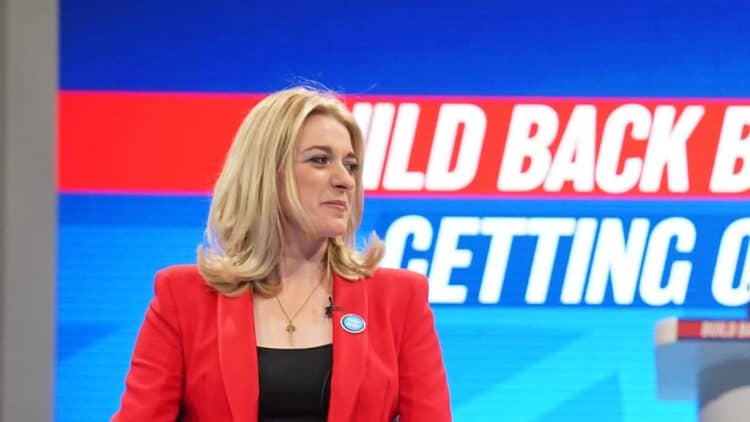 Dehenna Davison has been tipped as a future Conservative Party leader in a Sunday Times column today.

The MP for Bishop Auckland, who has been branded the ‘TikTok MP’ for her social media popularity, is a friend of Carrie Johnson and is rumoured to have been the leader of the ‘pork pie plot’ to oust the prime minister.

Last year she appeared to have a subtle dig at Dominic Cummings as she appeared on screen with a Barnard Castle eye test while asking a question in the House of Commons.

She also said she was “overwhelmed by the outpouring of love” after publicly announcing she is bisexual.

Speaking to the Sunday Times, the 28-year-old MP who got married on reality TV credited her 2019 win to Boris Johnson, saying he has an “incredible charisma”.

“You know, there aren’t many party leaders you can take to a beachfront in Hartlepool and people stop every four steps for selfies and to shake his hand. That’s a rock-star politician, something you don’t see very often at all,” she said.

She was still a student when in 2015 she first stood for parliament – prepped by Jacob Rees-Mogg for candidate selection – coming third in Hull North.

In the 2017 election she was asked to try for Sedgefield. She came second (it turned blue in 2019), but as a rare young female northern Tory her profile rose.

Social media has had a big role to play in that.

Davidson is widely followed on TikTok, but admits appealing to the traditionally Labour under-thirties can be hard.

“You tweet, ‘Bring down capitalism!’ and people are like, “Yeah!” But explain to them that it means you won’t have an iPhone and they’re like, ‘Oh, OK…’”, she said.

“To me, Conservatism is trying to give you the best chance in life. To grow up, get a job, buy a house, have a family and leave a better life for future generations. When you try to explain that approach, it clicks a bit more. But it’s difficult.

“Labour have a lot of answers that are based on shaking the magic money tree a bit more.”