Mr Raab had played up his image as a Brexit hard man during the leadership race in an attempt to win support from the Tory right. 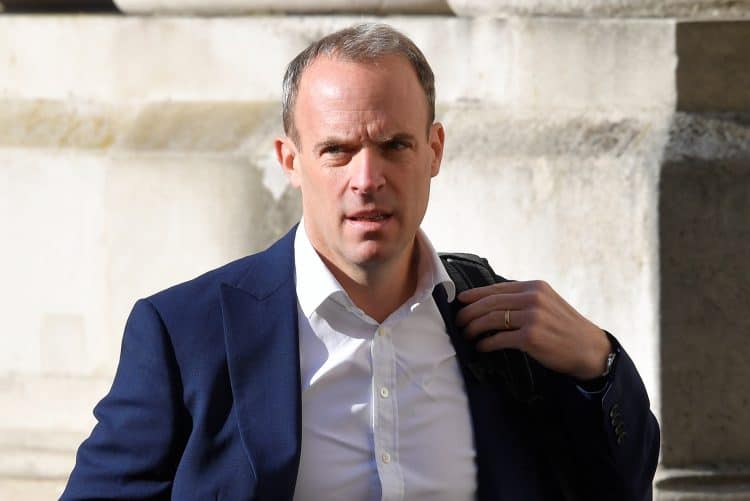 Dominic Raab’s demotion from foreign secretary follows widespread criticism of his handling of the Afghanistan crisis.

The appointment was confirmed by Downing Street in a tweet shortly after Ms Truss was seen entering No 10.

Raab was on holiday in Crete as the Taliban swept across the country and was seen relaxing on a beach on the Greek island as members of the militant group entered Kabul, although he insisted he was in touch with officials and ministerial colleagues.

Boris Johnson’s decision to move the Esher and Walton MP to the Ministry of Justice from the Foreign Office marks a setback in Mr Raab’s ambitions.

He had designs on the Tory leadership in 2019, although he fell at the second hurdle and subsequently backed Mr Johnson.

However, when Mr Johnson was admitted to hospital with coronavirus in 2020, Mr Raab, as first secretary of state, found himself effectively leading the Government during some of the darkest days of the pandemic.

That role has now been formalised with Mr Raab picking up the title of Deputy Prime Minister.

Karate black belt Mr Raab had played up his image as a Brexit hard man during the leadership race in an attempt to win support from the Tory right.

In 2018 he quit his Cabinet role as Brexit secretary in protest against Theresa May’s approach to the issue.

The 47-year-old has been MP for Esher and Walton since 2010 and before that was a Foreign Office lawyer.

His political career suffered an early setback, with Mrs May taking particular offence at his description of some feminists as “obnoxious bigots” in a 2011 online article in which he attacked the “equality bandwagon” and said men were getting “a raw deal”.

During the 2019 leadership contest he said he would “probably not” describe himself as a feminist although he was “all for working women making the very best of their potential”.

In 2020, at the height of Black Lives Matter protests, Mr Raab suggested “taking the knee” was a symbol of subjugation which originated in TV drama Game Of Thrones, adding he only kneels for “the Queen and the missus when I asked her to marry me”.

The son of a Czech-born Jewish refugee who fled the Nazis in 1938, Mr Raab was brought up in Buckinghamshire and took a law degree at Oxford University before switching to Cambridge for his masters.

Mr Raab also enjoyed boxing at university and claims it has been “pretty good in terms of preparing me for other big moments”, although “nothing has ever wracked me with nerves quite the same way”.

The senior Tory denied claims, made by his former diary secretary in 2018, that he insisted on the same Pret A Manger lunch every day.

The “Dom Raab special” apparently consisted of a chicken Caesar and bacon baguette, superfruit pot and a vitamin volcano smoothie.