The UK has signed a trade deal with New Zealand - and the economic forecasts suggest its impact will be negligible. 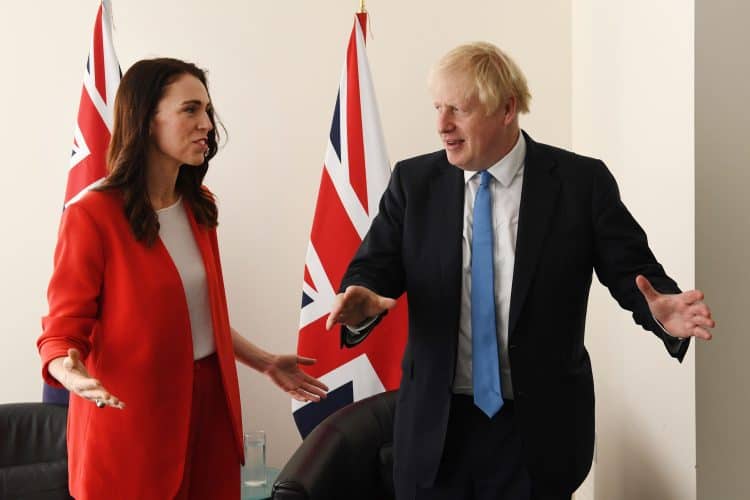 The UK has penned a post-Brexit trade deal with New Zealand, claiming the agreement will cut red tape for businesses.

Under the terms of the deal tariffs will be waived on a range of imports – potentially reducing the price of Sauvignon Blanc for thirsty Brits by 20p, and reducing taxes on products like Manuka honey.

Trade between the two nations was worth £2.3 billion last year, and the Department for International Trade said that is set to grow under the deal.

But farmers warned of “huge downsides” to the deal, which they said “could damage the viability of many British farms in the years ahead”.

And the government’s own forecasts suggest the agreement – hailed by Boris Johnson on Wednesday night as “a great trade deal for the United Kingdom” – will have a negligible impact on the economy, and could actually cause it to shrink.

An official strategic outline of the government’s plan, which emerged last year, said the effect on GDP from the New Zealand deal will be “close to zero”.

Under one modelled scenario, government statisticians believe it is possible that the UK economy could actually contract by -0.01 per cent – lowering the overall welfare of the UK population as a result.

The deal – only the second bespoke Brexit trade agreement struck by the government since Britain’s departure from the EU – has drawn stark contrasts with the economic impact that resulted from joining the bloc.

Britain first joined what was then the European Economic Community in 1973 with France, West Germany and Italy all producing more.

Between 1958, when the EEC was established, and the UK’s entry in 1973, GDP per head rose 95 per cent in those three countries compared with only 50 per cent in Britain.

But, in the years after joining the bloc, GDP per person in Britain has grown faster than Italy, Germany and France and in 2013, according to FT analysis, the country became more prosperous than the average of the three other large European economies for the first time since 1965.

However analysts warned that EU membership can not be definitively established as the spark which kickstarted the country’s productivity.

Ruth Lea, an economic adviser to private bank Arbuthnot Services, told the newspaper that the leading cause of the revival in Britain’s fortunes was “a certain lady from Finchley”: Margaret Thatcher, who privatised state-owned companies, deregulated the City of London and weakened union power.

‘Fails on every count’

That did not stop Johnson celebrating his new deal with Jacinda Ardern’s New Zealand on Wednesday, however.

“This is great trade deal for the United Kingdom, cementing our long friendship with New Zealand and furthering our ties with the Indo-Pacific,” the prime minister said.

“It will benefit businesses and consumers across the country, cutting costs for exporters and opening up access for our workers.

“This is a fantastic week for Global Britain. On Tuesday, we raised almost £10 billion in investment for the industries of the future, and this new deal will help drive green growth here and on the other side of the world in New Zealand.”

“This world-leading free trade agreement lays the foundations for even stronger connections as both countries embark on a new phase in our relationship. It is good for our economies, our businesses and our people.”

Anne-Marie Trevelyan, the UK trade secretary, added:  “This deal is a win-win for two like-minded democracies who believe in free and fair trade. It delivers for families, workers and businesses across Britain, and sets the stage for greater cooperation between our two nations on global challenges like digital trade and climate change.”

However the Scottish government said the deal “will not remotely offset the damage to our economy caused by Brexit”, while shadow trade secretary Emily Thornberry suggested it “fails on every count”.

“It is a deal whose only major winners are the mega-corporations who run New Zealand’s meat and dairy farms, all at the expense of British farmers who are already struggling to compete,” she said.

Do you agree with this Guardian reader’s takedown of Thatcher’s statue?