Mark Spencer said in December that "clearly people were having a drink", but "real people" weren't bothered by Partygate. 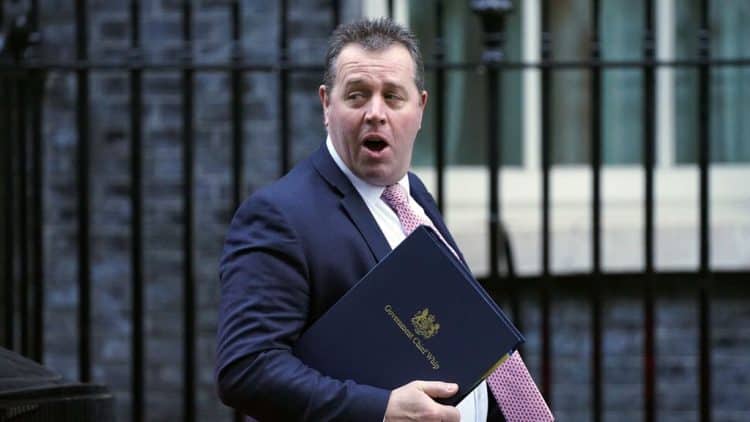 “Real people” in the “real world” do not care about alleged lockdown-busting Downing Street parties, the new Leader of the House of Commons has claimed.

Mark Spencer, who replaced Jacob Rees-Mogg as Commons leader in a mini-reshuffle on Tuesday, stuck by comments he made in December, when he suggested Boris Johnson “will not have lied” about the gatherings.

At the time, he told BBC Radio Nottingham: “I am assured that everybody in that building played by the rules. I’m told there weren’t any parties. The prime minister will not have lied about any parties.”

The Tory MP said Johnson had apologised for mistakes after senior civil servant Sue Gray published a draft report of incidents involving the government during lockdowns – which are currently investigated by the police, prompting him to withhold from making further comments.

But he said: “Clearly people were having a drink, I’ve done that. I’ve had a drink of alcohol during Covid.”

He added: “When you get out into the real world and you talk to real people, my experience is they are saying to me ‘you know what really matters to me is the cost of my energy bills, the NHS backlog post-Covid, making sure the economy is growing and my job is secure’.

“It’s fair to say Downing Street didn’t get everything right but let’s focus on the real world here.”

Spencer’s appointment has resurfaced his role in trying to attract Tory support for changing the Parliament’s corruption rules in order to prevent former Tory MP Owen Paterson from losing his job – which was subsequently dropped following public backlash.

And he has also faced claims, which he denied, that he told Tory MP Nusrat Ghani she lost her ministerial role because her Muslim faith made people feel uncomfortable.

His recent row with Ghani has reportedly sparked worry among MPs that he has been given a promotion despite being investigated for the allegations.

In an interview with The Sunday Times last month, Ghani said she was told that her “Muslimness” had been raised at a Downing Street meeting.

“It was like being punched in the stomach. I felt humiliated and powerless,” she said.