Boris Johnson launched his legislative agenda for the coming years by conceding he cannot ‘completely shield’ everyone from the cost-of-living crisis. 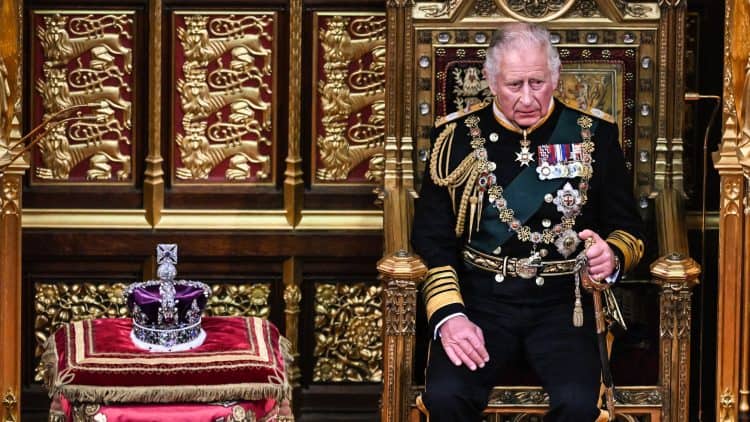 Boris Johnson billed his legislative agenda as a blueprint to get the country “back on track” after the coronavirus pandemic, and will hope it can bolster his troubled premiership.

But attention will quickly turn to what the Queen’s Speech lacks, with the Prime Minister saying he cannot “completely shield” everyone from the cost-of-living crisis.

Essentially there are 38 Bills in the programme, but nothing to alleviate consumers’ soaring household expenses right now.

Here is a look at what was in the Speech and what was absent.

– What is the Queen’s Speech?

Written entirely by the Government, the Queen, as head of state, reads the outline of policies and laws proposed for the new parliamentary session.

But this Tuesday’s State Opening of Parliament had a striking difference: the 96-year-old Queen was not speaking at all, and was not present for the first time in 59 years.

Instead, the Prince of Wales stood in for the major constitutional duty due to the Queen experiencing what Buckingham Palace described as “episodic mobility problems”.

Mr Johnson will hope that eye-catching policies will help shore up his leadership which has been rocked by partygate and heavy losses in the local elections.

Ministers will try to force through a crackdown on “guerrilla protests”, with jail sentences and unlimited fines for those who disrupt key national infrastructure.

A series of measures will seek to take advantage of Brexit, including tearing up EU regulations and implementing free trade deals with Australia and New Zealand.

Amid the drawn-out invasion of Ukraine by Russia, the security services will get extra powers to tackle foreign spies and efforts to influence British democracy, with a reference to Chinese interference.

A Levelling Up and Regeneration Bill will seek to drive local growth and regenerate towns and cities across England, including by enshrining the Government’s levelling up “missions”.

It will also include reforms to the planning system to “give communities a louder voice”, after previous plans were paused amid Conservative resistance.

An Energy Security Bill seeks to transition to cheaper and greener energy while aiming to minimise fluctuating bills, including by extending the price cap beyond 2023.

And a UK Infrastructure Bank with £22 billion of financial capacity is among the plans to grow the economy and get it “back on track” after the pandemic, as Mr Johnson put it.

– What does it lack?

Labour critics and possibly those on the Conservative backbenches too are bound to seize on the absence of any measures to immediately alleviate the pain of spiralling prices.

There is no windfall tax on the soaring profits of energy giants, which has been demanded by opposition parties and others campaigning to ease the cost-of-living crisis.

Instead, ministers highlighted a £22 billion package already announced while hinting at further support in the future.

Referring to the Russian invasion and the “aftershocks” of Covid-19, Mr Johnson said: “No country is immune and no government can realistically shield everyone from the impact.”

Also absent was legislation to implement the Government’s threat to tear up the post-Brexit deal on Northern Ireland’s trading arrangements.

But it is understood that Foreign Secretary Liz Truss could take further action in the coming weeks if negotiations with the EU continue to stall.

The new parliamentary session begins when Charles leaves and MPs and peers get back to work, starting with around six days of debate on the Speech.

A vote will be held in the Commons to approve the agenda, but is likely to pass with Mr Johnson’s Conservatives holding a large majority.