It's straight to DVD for this one, which could be an issue given that most Tory members still rely on VHS tapes they found in bargain baskets at Woolworths. 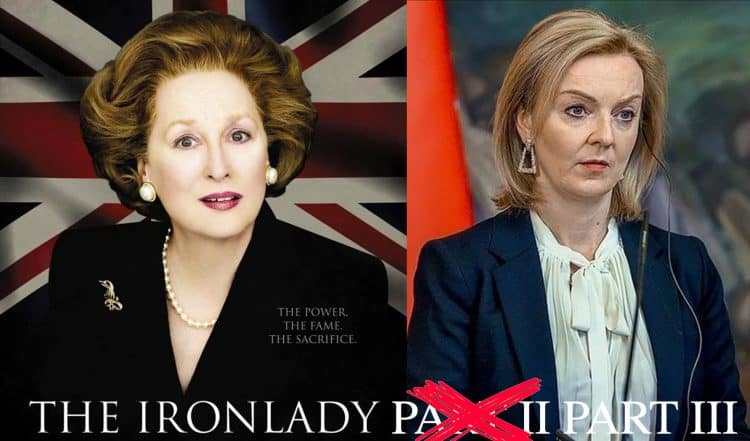 The film only 81,000 Tory members voted for has already scored a record low on rotten tomatoes, with Sex of Lives of the Potato Men finally lifted off the bottom of the pile.

Yes, there is some support for the first iron lady, a creature so evil and so devoid of human emotion that she made the Terminator look like Robin Williams’ character in Dead Poets Society.

Theresa May even asked a question, in a Sliding Doors moment, to Truss, querying why all three female prime ministers have all been Conservative.

I have to agree that the Labour party’s overreliance on white male leaders is an issue, but just being a woman doesn’t mean anything when you’re a cyborg.

Staying with the second coming, Theresa May, they made her a bit more slapstick, less Terminator more Carry on Cabinet. A softer side maybe, but still with a stone-cold core.

So who wanted this new version? Well, a hardcore community of 80,000, who would be on the dark web somewhere sharing conspiracy theories, if they could get online as their average age is hitting 85.

Truss is the straight to DVD version, which could be an issue given that most Tory members probably still rely on VHS tapes they found in the bargain baskets at Woolworths.

The red carpet treatment will only happen when she visits her first pork market.

Her film could become a cult hit years down the line, but I’m not sure humans will exist then.

Maybe it will be a story told around a campfire as the last human survivors roast rats, cats and the soles of their shoes for nourishment.

In this trilogy of shame, there was a brief diversion, but the cartoon cosplay version of Winston Churchill was finally seen off yesterday in a huff.

Woman not for turning up

The problem with Truss is that she didn’t even get screen tested, the woman was not for turning up.

Nick Robinson is hardly the Mark Kermode of political critics, he was president of the Oxford University Conservative Association, basically a fanboy.

Instead, she appeared in front of her superfans, who probably have pictures of Thatcher on the ceilings.

There was no real scrutiny from the hoi polloi, aside from a few interviews in front of her obsessive fans.

Truss just said anything she thinks they wanted to hear. Hate the French? Have some of that. Cut the green crap? Yeh we will frack the place.

These are hardcore Tories. It was like a conservative comic con.

So what we have been left with is a cosplay Thatcher, trying to rekindle the character from the first film.

Truss has got rid who has got rid of Patel and Nads, but as Stewart Pearson says in the Thick of It: “You can take out a sexist beam here, a callous window there, replace the odd homophobic roof tile. But after a while you realise that this renovation is doomed. Because the foundations are built on what I can only describe as a solid bed of c*nts.”

So what did she say today? She will not tax oil and gas companies instead we will pay over the next 30 years for the energy cap freeze, she will drill in the north sea and build some nuclear power stations.

The market will get us out of the mess the market got us into in the first place. It’s groundhog day.

Even Starmerbot 3000 had enough to put her in her place on this. He was the machine that was given human traits at birth but rejected them.

But how will the film and hopefully franchise end? Maybe a TV spin-off show when they are in opposition on one of the minor channels, Dave, History or GB News. Hopefully, it gets a lot of series.

But back to the film, the grand finale.

In the closing shot as Truss is hoisted by her own petard, and then lowers herself into the mire, she will look to the camera and say: “I know now why you cry. But it’s something I never want to do.”