You wonder how many Tories are proud to finally get one of Thatcher’s most unfair policies through. A fitting tribute to the old girl. 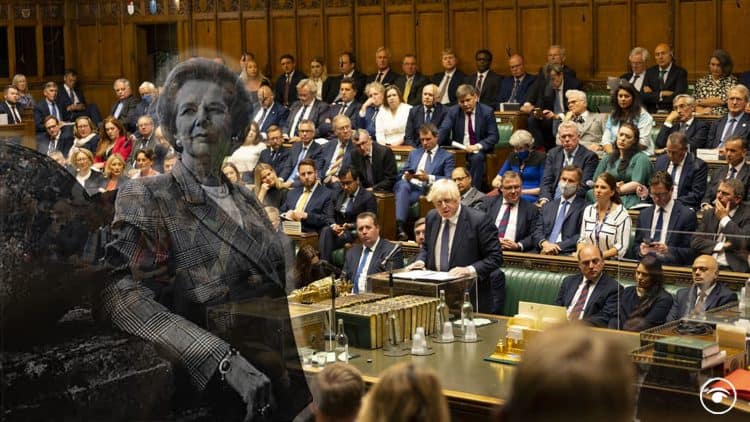 This was the PMQs the prime minister had waited 18 months for.

Like playing football behind closed doors, it just wasn’t the same without a riotous bunch of drunk right-wing louts in attendance, but enough about Estadio de la Westminster.

A smattering of MPs were wearing masks but most managed to adhere to the new stricter dress code; Wolves in wolf’s clothing. Back in the real world, 209 people died from Covid yesterday.

There is nothing like a heaving throng of claret-cheeked posh boys to give Johnson the feeling of supreme power. Eton Rifles was a song about a gang of posh boys beating up the working-class lads, after all.

The National Insurance hike (always worth remembering it is a 10 per cent rise, not 1.5 per cent – it got me for a minute!) is the largest tax increase since the Second World War, and will fall hardest on the shoulders of the poorest.

The PM selectively quoted the Institute for Fiscal Studies saying his plan was ‘progressive.’ Strange one as the think tank also said that the tax taken from the rise is likely to be swallowed up by the NHS.

The £350 million a week for the NHS had an Italian Job ending, and someone has to fill the coffers for the money given to management consultants to fail to test and trace us.

If any money does make it through to the social care sector, you can bet it will land in the pockets of private care providers, usually owned by huge US private equity groups.

At PMQs Starmer didn’t really manage to land a blow on this though, it was left to Ian Blackford (as if often the case) to go for the PM’s jugular.

He told Johnson that this was simply a new poll tax. Will the young people remember this awful Thatcher plot? They will when they read their payslips over the coming years.

You wonder how many Tories are proud to finally get one of Thatcher’s most unfair policies through. A fitting tribute to the old girl.

It also seems the respect for the plight of migrants, especially from Afghanistan, has waned with the Tories, which will come as no surprise. Lee Anderson MP stood up and basically said push the boats back from the shore and point the occupants back to France. Simple and sadistic.

Regardless of their education and talents, these desperate refugees will likely end on low paid jobs, possibly in social care, helping to pay this tax increase to ensure rich Tory property owners can ensure they can hold on to their estates.

There was some light entertainment though when Peter Kyle asked:  “Gavin Williamson has got a net approval rating of -53 among Tory supporters… can the PM promise the country that Gavin Williamson is the right person for the job and he’s up to the job? “

The PM robustly defended Corporal Calamity, saying he had done a ‘heroic’ job.

However, just as he made these comments a story broke about the beleaguered Education secretary.

In an interview, he was asked if he ever met Marcus Rashford, to which he replied: “We met over Zoom and he seemed incredibly engaged, compassionate and charming”. Later Williamson’s team told the interviewer he actually met the rugby player Maro Itoje, not Rashford.’

Not all heroes wear capes, the Commons dress code put pay to that.

Related: PMQs: PM checks out at Chequers as holiday fever spreads through the nation