Gimme Gimme Gimme a mojito after midnight - as long as it arrives in a suitcase. 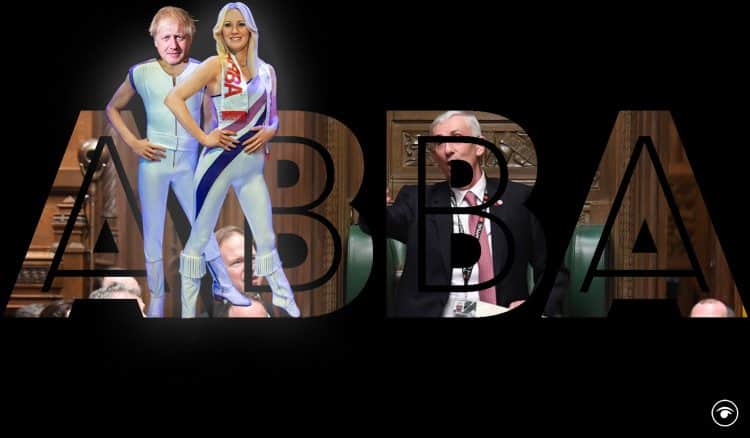 Overnight there were more claims of parties at Downing Street, this time it was an ABBA themed bash. Gimme Gimme Gimme a mojito after midnight – as long as it arrives in a suitcase.

There are even pictures that will incriminate him, claims Dominic Cummings, the bjorn again bitter ex-member of the band.

A note of caution though: Johnson’s mop could well blend into the background in a group pic. Let’s be honest everyone has attended at least one Abba themed party in their lives, so keep a keen eye out for him; knowing me, knowing you.

The session was delayed a few minutes today as the speaker spent the first few minutes warning off MPs from accusing the PM of misleading parliament.

Hoyle doesn’t half like the sound of his own voice, and Erskine May, ‘the Bible of parliamentary procedure.’

The name of the game is the Speaker will not tolerate accusations of lying or misleading the House but will tolerate lying and misleading in the House.

And in that spirit, the PM proceeded to tell lies, half-truths and peddling “conspiracy theories of violent fascists” for the next half an hour.

Rather than withdrawing his remarks, the PM doubled down and said: “I am told that in 2013, he apologised and took full responsibility for what had happened on his watch,” Johnson said.“I think that was the right thing to do.”

From a party who welcomed the monster with open arms, it does seem a desperate defence.

What else did he mislead the house about today? Too much to fit into 500 odd words, but “we have the fastest growing economy in the G7” was one of them. We are actually fifth and from the lowest starting point.

He also said that “thanks to Brexit we had the fastest vaccine rollout in Europe and we’ve been able to deliver our Freeports.” The EU has a number of Freeports and various countries have had a quicker immunisation push.

Starmer then decided to follow the money, money, money and brought up an article from the Sunday Times in which the PM said he was a tax cutter.

Well, he is for banks. Chancellor Rishi Sunak is cutting the surcharge tax on bank profits from 8 per cent to 3 per cent. He is putting up taxes for everyone else. It’s a rich man’s world.

The labour leader went on. What about the Brexit yacht? £8.7 billion in wasted PPE? £4.3 billion of fraud on covid loans the government won’t let the NCA investigation?

Oh what a lovely pandemic, a few lane jumping VIPs must think, they came out their version of the Battle of Waterloo unscathed and with all of our bounty.

There still remains the very real possibility he could be forced out of his job. Tobias Ellwood was the latest Tory MP to demand he quit earlier this morning.

However, after sending out an SOS he managed to get one red wall Tory (Blyth MP Ian Levy) to support him, but he could only manage to moan about traffic congestion. Not quite a super trouper but at least he was one of us.

Johnson also got one MP to demand there is a new position for, wait for it, a Minister of ‘Brexit Benefits,’ I have a dream, a fantasy.

But the PM (big) doggedly remains in power, for now.

None of his own party used their question today to openly demand he goes, they are doing that by letter now, so maybe he left the session thinking his leadership isn’t ‘slipping through my fingers.’

It seems that at the end of the day the sinner takes it all.