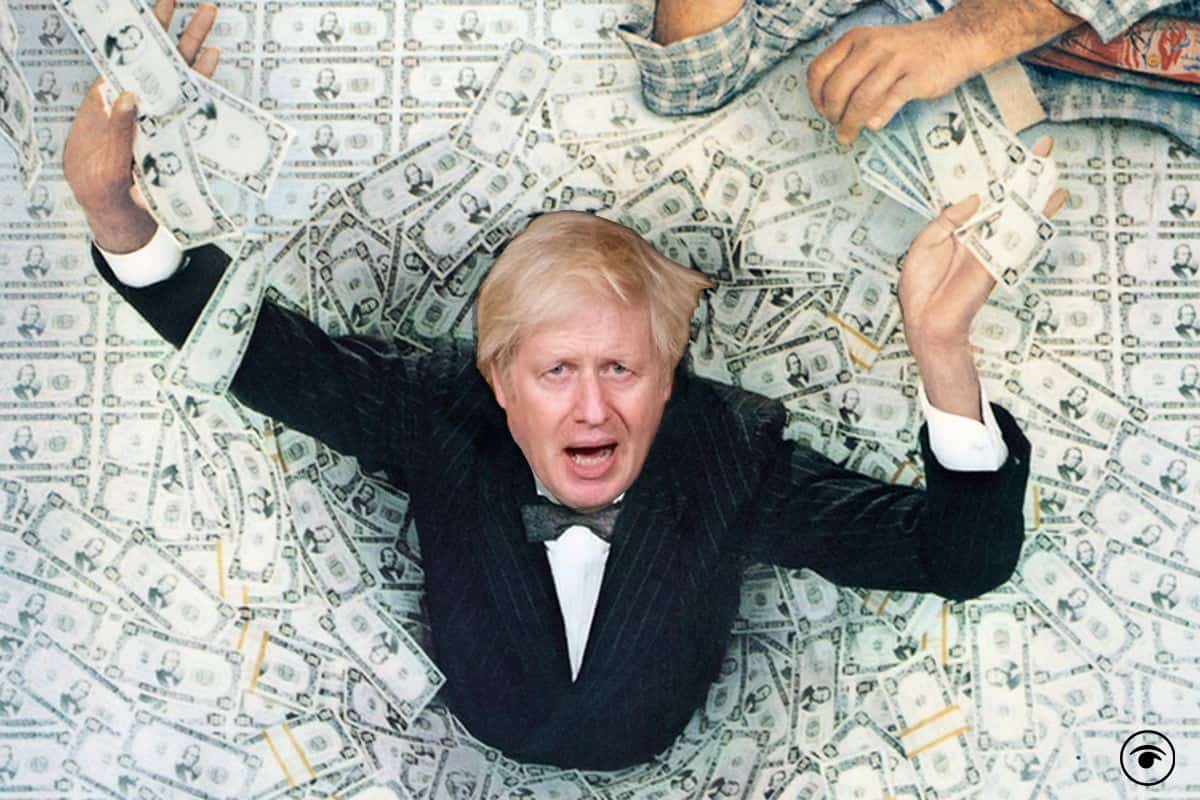 There was a film released in the ’80s called Brewster’s Millions.

The premise of the film was that a minor-league pitcher, Montgomery Brewster – played by Richard Pryor – learns his great-uncle has left him $300 million.  But, to inherit it, Brewster must spend $30 million in 30 days under a complicated set of rules that forbid him from donating too much to charity or retaining any new assets when the period is up.

Maybe it’s lockdown, or perhaps I have joined the ever swelling ranks of the conspiracy theorists, but as I watched PMQs today it dawned on me that Brewster’s Millions must be our illustrious prime minister’s favourite film, so much so that he’s desperately trying to re-enact it. There is no other explanation.

Starved of his bountiful Telegraph salary we know Boris needs the money. We know too that his dad, Stanley, walks around with a confidence that only a billion pounds stashed away in a Cayman Islands bank account can bestow.

Wealthier than the Queen

And today we were told that spending on the much-criticised NHS Test and Trace is set to reach £37 billion, after Rishi Sunak – the chancellor whose millions run Brewster close – lobbed another £15 billion into the pot in last week’s Budget. Pocket money to Rishi of course, considering his wife is thought to be wealthier than the Queen.

It’s not charity, Johnson must have thought to himself, as management consultants sucked more than £2.7 million from the public purse each day. Giving money to frontline NHS staff, the undisputed heroes of the pandemic, or our embattled public sector would break the rules. A 1 per cent pay rise is a cut in real terms, so no problem there.

But were there any assets from the Test and Trace system he needs to worry about? Again no, there was no measurable difference of the scheme to the progress of the pandemic, a much-anticipated report concluded.

So the best we can hope for from that £37 billion is that it didn’t make the Covid-19 crisis any worse – like, say, the Prime Minister of Great Britain and Northern Ireland boasting about shaking hands on a hospital ward the day the WHO begged us all to not to.

Keir Starmer – who must be barely able to believe his luck, the NHS pay scrap being the political equivalent of an own goal – wanted to know why Dominic Cummings – remember him? – could get a pay rise, but the NHS couldn’t. He should have known: giving the lockdown lawbreaker a 40 per cent pay rise isn’t charity, it’s sympathy for the devil.

The Labour Leader wanted to know why Johnson had spent £2.6 million of taxpayers’ money on Downing Street TV studio and £200,000 on new wallpaper for his flat. The PM just wished he had got the matching curtains as well.

Johnson even lied that Labour had voted against a 2.1 per cent pay rise for NHS staff. He legged it out of the chamber before he heard an angry point of order. He wasn’t going to let the truth – what a buzzkill, eh? –  keep him away from his potential prize pot.

So where else could he spend billions and know that nothing will ever happen and only the private sector will benefit? Like something out of a rubbish boardgame, a fantasy bridge from Scotland to Northern Ireland – coming in at a pretty £33 billion – should do the trick.

In reply to a question about the hairbrained scheme, Johnson sought to direct parliamentarians towards “my column in today’s Telegraph”. So if you, a British citizen, want to find out a bit policy you have to sign up to a monthly subscription or buy a copy of the paper. Seems fair.

Johnson said it was ‘’delightful!” that Ian Blackford couldn’t join today’s PMQs due to technical issues.

Perhaps a Scottish Tory or two had, Bond-esque, donned a wetsuit and descended to the depths of the Irish Sea to identify the deepest trench possible in which to spaff the billions for BoJo’s bridge – and cut off the connection to Blackford’s Western Isles constituency in the process.

But time was running out for Johnson, he needed to waste another few billion pounds by the end of the session.

And with that he had spent his requisite amount of money, happy in the knowledge that Failing Grayling would click the wrong box to save or destroy forests and a worldwide scorched earth policy would be implemented.

So watch out for ‘Boris’s Billions’ coming to a cinema near you soon. Just like Meghan and Harry’s stint in the UK, it doesn’t end well.