In 'the life of Boris' he claimed he alienated 148 of his own MPs because he has done "big, remarkable things". These 148 "rebels" should have walked out as the PM sauntered in, but they didn’t. 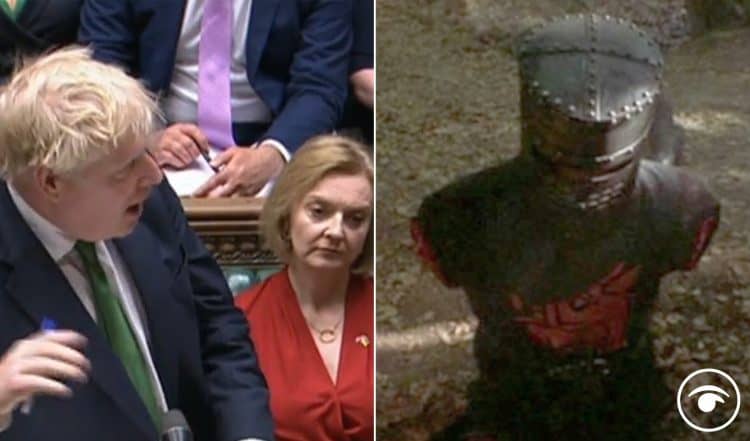 The economy has ground to a halt, more than 40 per cent of his own MPs don’t want him and his own real backer is Nadine Dorries. Yet, somehow, Boris Johnson walked away from PMQs unscathed, almost healed.

It may be hard to take but it would be churlish to say that his stock had fallen, admittedly from a subterranean level, after an expected Labour onslaught never really arrived.

He sailed through the session. His own party might not want him, but they want to stay in power and keep their major donors on side lot more.

Johnson even claimed that he has alienated 148 of his own MPs because he has done “big, remarkable things”. These 148 “rebels” should have walked out as the PM sauntered in, but they didn’t.

Barely 48 hours on they were back shouting down the opposition and laughing when subjects like cancer were being discussed.

Starmer went on the attack about the crippled NHS, not the flatlining PM, and singled out a tweet from Dorries – in which she seemingly admitted that the Tory-run health service was woefully underprepared for the pandemic.

Now, this might come as a surprise to Starmer but nobody takes a word that Nads says seriously. She is actually right on this one, but the girl who cried Big Dog will find that this comment will be filed away with all the nonsense she regularly comes out with.

The PM continued to bat off Keir, claiming that 40 new hospitals are coming, I thought it used to be 48? Well, at the end of the day the actual number of imaginary hospitals doesn’t really matter.

As it turns out of the 40 only three are entirely new hospitals, others are refurbs and only six have been started, and as it stands only one has any chance of being completed by the original target date of 2025.

Then the PM was asked about cancer treatment on the NHS. He insisted that the diagnostic plan is a great success when a private oncology centre with sites across the UK has collapsed into liquidation this week!

The Labour leader ended with a tragic story of a man who dialled 999 six times as his mother died. Johnson offered perfunctory condolences and then bragged about how well he is doing.

It doesn’t matter that he lied over and over again. An infinite number of fact-checkers couldn’t keep up with the mistruths he spouts.

It was left to Ian Blackford to slice into the PM, comparing Johnson to Monty Python’s Black Knight: “Tis just a flesh wound!”

He added: “Week after week, I’ve called on the Prime Minister to resign. I’ve been met with a wall of noise from the Tory benches. I thought they were trying to shout me down, but it turns out 41 per cent of them have been cheering me on.”

But the PM battled on, and the number of notes and answers being shouted to him by his MPs was staggering even for him.

The whole charade reminded me of Weekend at Bernie’s. They just need to keep waving his dead arms about, prop him up, so they can work out the best way to stab each other in the back to make moves to the top job.

The Cabinet will publicly back him as that ensures they can be seen to take the top job once Johnson goes.

And this opportunity was not missed by Liz Truss who was doing her best impression not just of Thatcher but of Thatcher’s statue, stoically refusing to make any facial impressions at all.

If she isn’t careful people will start pelting her with eggs, or maybe cheese.

The PM might be a dead man, but he is still walking for now.