A bit of hair of the big dog, and there was plenty on his suit as ever today,  might be on the cards for the Tories after today’s PMQs 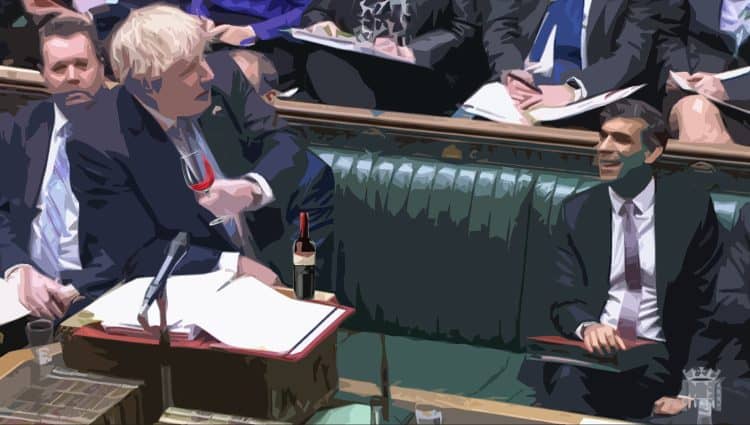 There must have been some sore heads in the chamber today.

Last night, after partygate fines were handed out, the Tories headed to the Park Plaza for a boozy bash.

Perhaps they will become a macabre source of pride for those slapped with the penalty, as electronic tags and asbos sometimes are.

To be fair Carrie might prefer the prime minister to be on a tag, meaning his wandering eye would have to return to base camp by 7pm.

Families who lost loved ones to Covid held a candlelight vigil outside the party and shouted at MPs: “Off to another party, are we?”

Tory MP Micheal Fabricant shamelessly told reporters “we’re gonna have a lot of fun.” He must have been planning to let his hair down (no pun intended). However, it’s a shame wig jokes are off the menu at the moment…

Hair of the big dog

So a bit of hair of the big dog, and there was plenty on his suit as ever today, might be on the cards for the Tories after today’s PMQs, as they set off for their Easter break.

It was left to Ian Blackford to tell the PM that “the Tories partied during the lockdown, and now they’re partying through the cost of living emergency”.

All the talk of partying got me thinking, if you took a drink every time the PM lied during PMQs, would you end up consuming more alcohol than a standard Downing Street bash?

I was going to give it a go but counted three lies within the first few sentences the PM uttered.

At that rate I worked out I’d be dead by the time Sarah Champion popped up with question six on the order paper. Concerned about adding to the burden on the NHS, I held off.

In fact, the PM’s first words actually were a lie as he publicly supported Jamie Wallis, a Tory MP who came out as the UK’s first openly transgender MP.

Rewind to last night’s bash and the PM is said to have opened his speech by saying: “Good evening ladies and gentleman, or as Keir Starmer would put it, people who are assigned female or male at birth.”

A source of amusement last night can’t become a show of support today.

Other porkies included claiming that the Tories are still the tax-cutting party when the tax burden is the highest in 70 years. A measly cut in income tax before the next election is not going to fool anyone.

It is now official that Covid laws were broken at the heart of Johnson’s government after police issued the first 20 fines.  There were 39 times the government said no rules were broken in the first two weeks after the allegations came to light.

With that in mind Sir Keir Starmer told the House that Johnson broke the ministerial code when he claimed in Parliament no rules were broken regarding parties in Downing Street, so “Why is he still here?”

Johnson did look a bit wired at today’s session, so why didn’t he get his Bolivian marching orders?

The PM replied that Labour wants the UK to rejoin the EU. Again, not true, and literally nothing to do with the question he was asked.

A tissue of lies long enough to clean up the vomit after the most dangerous drinking game since the PM played ‘never ever I ever.’

According to this list the first question most people kick off with is Never have I ever cheated on a partner.