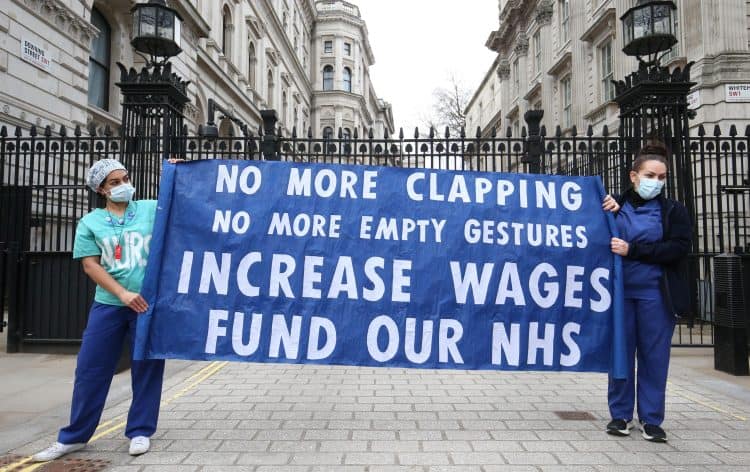 Sajid Javid has been accused of holding a “personal vendetta” against NHS staff, after he announced that free parking for NHS staff working in hospitals in England will end this week.

Parking fees were waived during the pandemic, but the health secretary said that benefit would end on Friday.

Unions reacted furiously to the news, accusing Javid of adding “insult to injury” after forcing NHS workers to “swallow yet another real terms pay cut”.

And figures from NHS Digital revealed that, in the year before charges were lifted for the pandemic, health workers shelled out £90.1 million in car parking fees.

Workers in the Midlands paid out the most, forking out £18 million in the year, followed by the North West (£17 million), then the North East and Yorkshire (£16 million).

NHS staff in the South East paid £11 million in parking charges, workers in the East of England coughed up £10 million while London-based employees paid £8 million.

“During the worst cost of living crisis in a generation he’s hell-bent on forcing them to swallow yet another real terms pay cut.

“Now follows the real insult to injury, he’s making them pay to park at work.

“Health workers are on their knees following a two-year pandemic – they need help and support, not being repeatedly kicked when they are down by the Government.

“GMB calls on the Government to restore this funding and on employers to do the right thing and scrap the reintroduction of local parking charges.”

TUC general secretary Frances O’Grady told the PA news agency: “Our amazing NHS key workers put their lives on the line to get us through this pandemic.

“Scrapping free car parking in the middle of a cost-of-living crisis is a lousy way to repay that service. The Government should be giving health staff a proper pay rise – not adding to their bills.

“And it should be funding our NHS properly so that hospitals don’t have to rely on car parks for income.”

The Department of Health and Social Care insisted that the perk was “temporary” and introduced in July 2020 “for the duration of the pandemic”. It said that the scheme had cost around £130 million over the past two years.

But Unison’s head of health Sara Gorton said: “This is no way for the NHS to hang on to staff in the current job market.

“Parking charges will add hundreds of pounds to the massive cost pressures already facing health staff and reduce their morale even further. Those already on the brink of leaving the NHS may well see this as the final straw and head for the exit, just as the service needs experienced staff the most.

“More than a third of staff have had to ask family or friends for financial support in the last year, according to Unison research. More than two fifths say they’re taking on extra work to make ends meet.

“This is the reality facing health workers. An inflation-busting pay rise is vital to stop more staff leaving NHS jobs this year.”