Eggnog on his face. His grand Christmas plans were being ignored like the Brussels sprouts on your dinner plate. 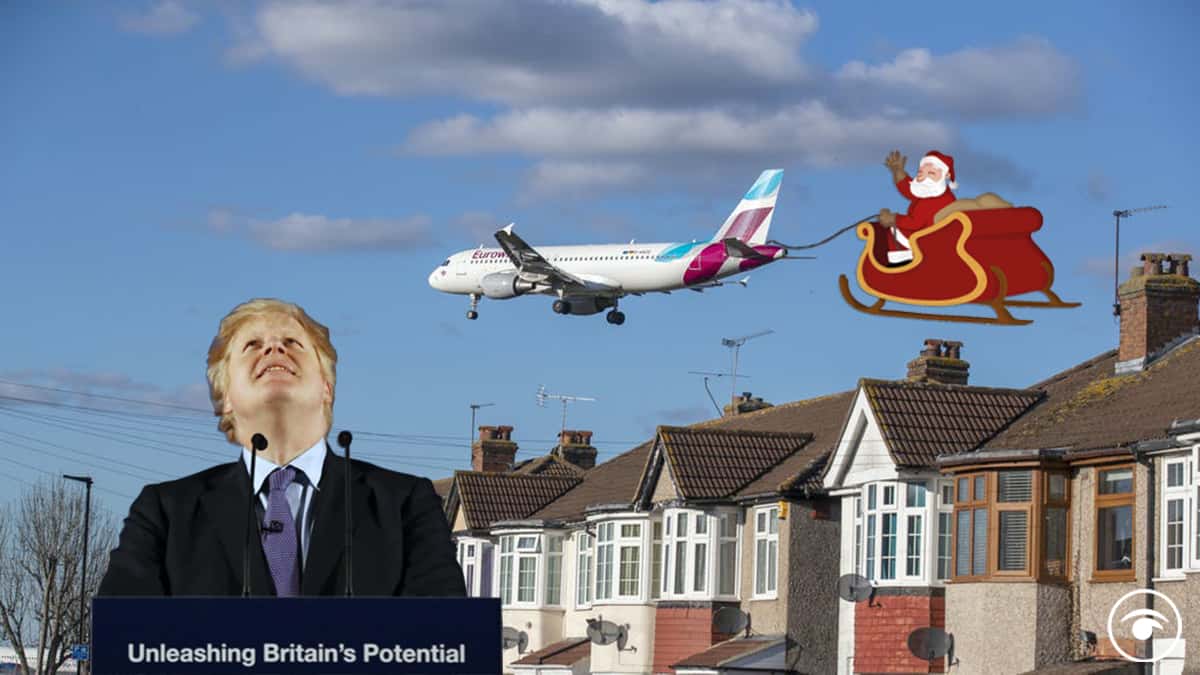 I wasn’t expecting Boris Johnson to be in the House of Commons for PMQs this week – I expected him to be at Heathrow, waiting prostrate for the bulldozers.

Maybe he squeezed his protest shift in this morning, as his barnet looked like it had subjected to a sustained onslaught from a wind turbine. More likely he just overslept – not like there’s much to be getting on with, is there?

Nobody seemed to be too bothered about Heathrow though. There was a general feeling of resignation that Global Britain’s building of another empty runway at great expense to go nowhere is a fitting metaphor for our times.

Instead it was Christmas on everyone’s minds, with this being the last PMQs before MPs split up for the big festive outbreak – sorry, break. Or is it? Oh yes, it is! But seriously, is it?

Actually we aren’t quite sure when our elected representatives will be back in the chamber. Apparently that decision is up to whatever new coronavirus and/or Brexit-related issue is hidden behind the door of the next day on the Downing Street advent calendar.

There will be no sly kissing under the mistletoe for the PM this year either – mainly because Carrie lives above the shop, and can keep an eye on Johnson’s sherried-up shenanigans at the office drinks.

And so it was that Boris Johnson, that decidedly unwise man, took to his feet in the House of Commons to proclaim good will to all men – especially those who voted for him – and to announce that he’d been on the phone to Wales, Scotland and Northern Ireland.

All the devolved nations have agreed to plough on with the planned easing of Covid-19 restrictions over Christmas, he said. He didn’t want to play the Grinch and criminalise anyone’s festive plans, he added – presumably because if he were to assemble all his family in one room it would require seven or eight household bubbles to join rather than the permitted three.

But Ho-Ho-Hold on a minute, because mid-session Wales and Scotland announced different guidance. Even for Boris, this was an epic farce. Eggnog on his face. His grand Christmas plans were being ignored like the Brussels sprouts on your dinner plate.

We – the huddled masses – are supposed to believe that this government, which can’t get Arlene Foster and Mark Drakeford in line or decide whether a Scotch Egg is substantial enough to earn you a skinful down the pub, can seamlessly extract Britain from the largest free-trading area on the planet? Pull the other one, it’s got jingle bells on.

Boris won’t cancel Christmas, but has demanded that people take personal responsibility – which is a bit rich coming from a man who went to court to keep one of his bairns a secret. The inevitable January spike, it seems, is already our fault.

Perhaps, over his goose, he can have a word with his old man who was seen, again, not wearing a mask on a tube.

As ever Johnson didn’t answer any questions. So, once more, Sir Keir Starmer was left asking – with a growing sense of futility – why Britain has one of the highest Covid-19 death rates in Europe, and the deepest recession on record.

Starmer then brandished the official newsletter of the Wellingborough branch of the Tory party, which advises budding Conservative politicians to say the first thing that comes into their head – and bluff their way through it. Sir Keir asked if Johnson is the author of this advice, or simply taking inspiration from it.

It ended, as it really started for Boris, with a bus. The PM was asked about supporting the bus-building sector.

He responded that he had done more than anyone to energise British bus-building. At last, an answer with a shred of truth. After all one big red bus, with a huge lie written on it, really does stand out.