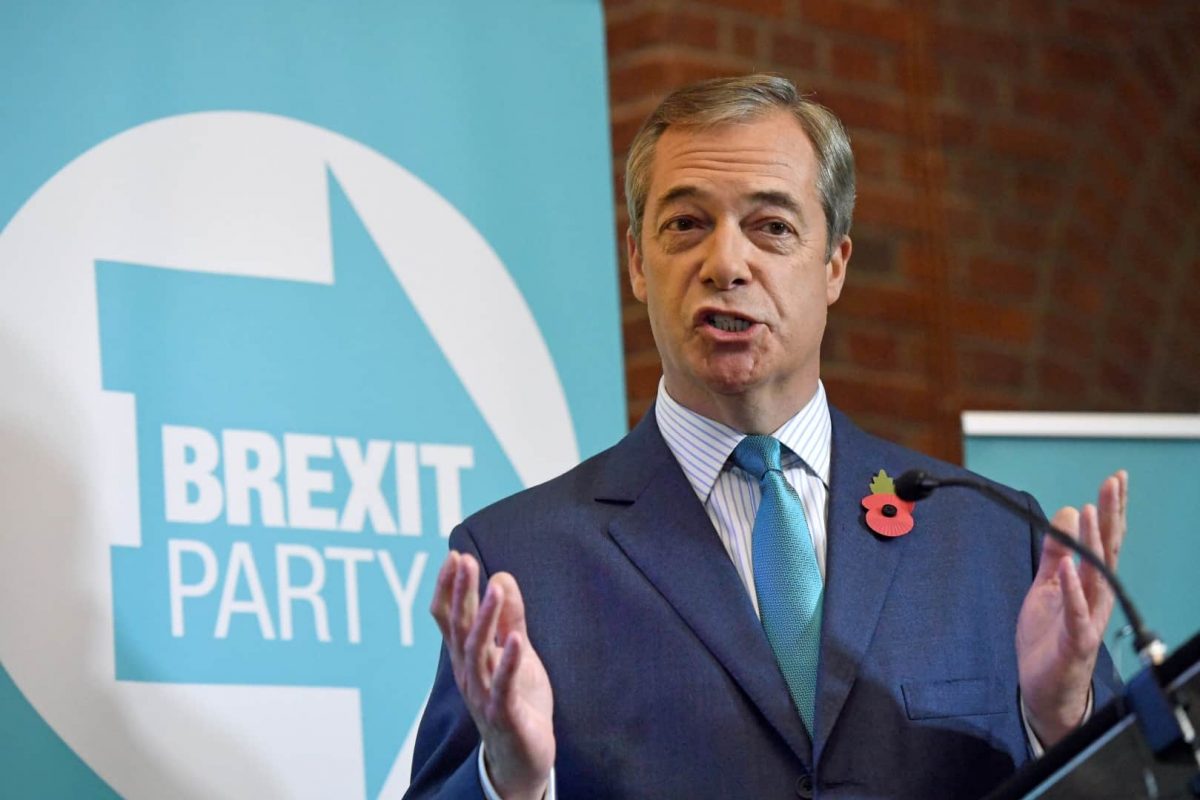 Despite seven failed bids to become an MP, Nigel Farage has announced he will not be standing as a candidate at the December General Election.

The Brexit Party leader said he believes he can better serve the cause by “traversing the length and breadth” of the UK campaigning, instead of fighting to get elected in one constituency.

He made the announcement when quizzed on BBC One’s Andrew Marr Show after he had revealed he had twice been offered a peerage in an attempt to get him to stand down Brexit Party candidates who are challenging Tories.

Nigel Farage told the Sunday Times newspaper that he has been twice offered a peerage, with the Brexit Party leader claiming it is one of a number of “baubles” put forward by the Conservative party.

If the Brexit Party did stand down hundreds of candidates across the country it would improve the chances of Johnson’s Tories gaining a majority or remaining the largest party in a hung parliament.

Yet speaking about Boris Johnson’s Brexit deal, Nigel Farage again compared it to a piece of smelly cheese that doesn’t stand up to scrutiny.

“When you get it out of the fridge, it’s really appetising and delicious for a few days, but after a couple of weeks it stinks and is inedible.”

“I always thought that to win an election, get a big majority so we can get a proper Brexit, a coming-together would be the objective.

“I still hope and pray it happens but it doesn’t look like it will.”

He went on to say that Prime Minister Boris Johnson’s current Brexit plan is not “genuine”.

“If Boris is determined to stick to this new EU treaty, then that is not Brexit,” he said.

“I promise you one thing: if Boris was going for a genuine Brexit, then we wouldn’t need to fight him in this election.”

Conservative grandee Ken Clarke also this week accused his former colleague Boris Johnson of choosing to hold an election rather than allow Parliament to scrutinise his deal.

Ken Clarke told Channel 4 News that Boris Johnson and Brexit Secretary Stephen Barclay “plainly didn’t understand” the “rushed withdrawal deal” they had negotiated with the EU, because “they didn’t understand that they had signed up to a real customs border down the Irish sea”, so to stop Parliament scrutinising their deal, they called an election.

Asked if he was going to stand in the forthcoming election, Nigel Farage told the Andrew Marr Show on BBC One on Sunday: “I’ve thought very hard about this – how do I serve the cause of Brexit best, because that’s what I’m doing this for.

Farage refused to back Boris Johnson’s “pointless” deal, saying “it does not work at any level, it is a gigantic con” and “virtually worse than staying where we are.”

Treasury Minister Rishi Sunak hit back at the criticism of the deal, telling the Marr Show: “I campaigned for Leave, I spent a lot of time talking to my constituents and others across the North East and in Yorkshire – what do they want from Brexit?

“They want to end free movement and replace it with a points system, they want to end the fact that money keeps going to the EU year after year, they want to make sure we’re in control of our laws, and also they want us to have an independent trade policy. These are all things the Prime Minister’s deal deliver.

“What I would say to Nigel Farage is, sometimes in politics, as in life, you’ve got to take yes for an answer.”

Yet when asked by Andrew Marr if a no deal Brexit was off the table after MPs’ had voted against it, he repeatedly refused to rule it out.

According to a YouGov opinion poll, the Labour Party have leapt up six points between Wednesday and Friday. Jeremy Corbyn’s party is now on 27 per cent, 12 points behind the Tories, while the Liberal Democrats have slipped three points to just 16 per cent.

The Brexit Party’s standing had nearly halved, from 13 per cent to 7 per cent since the election campaign began, contributing to a 3 point gain for the Conservative Party.

Another poll, by ORB International, has cut the Conservative lead to just eight points, with Labour now on 28 per cent.

However a poll by Opinium gives the Tories a 16 point lead, suggesting an accurate reading of voting intent will be difficult.