The ads with doctored headlines were viewed between 220,000 and 510,000 times according to Full Fact, an independent charity who work alongside other organisations on Facebook's Third Party Fact Checking programme which discovered the Tory slight of hand. 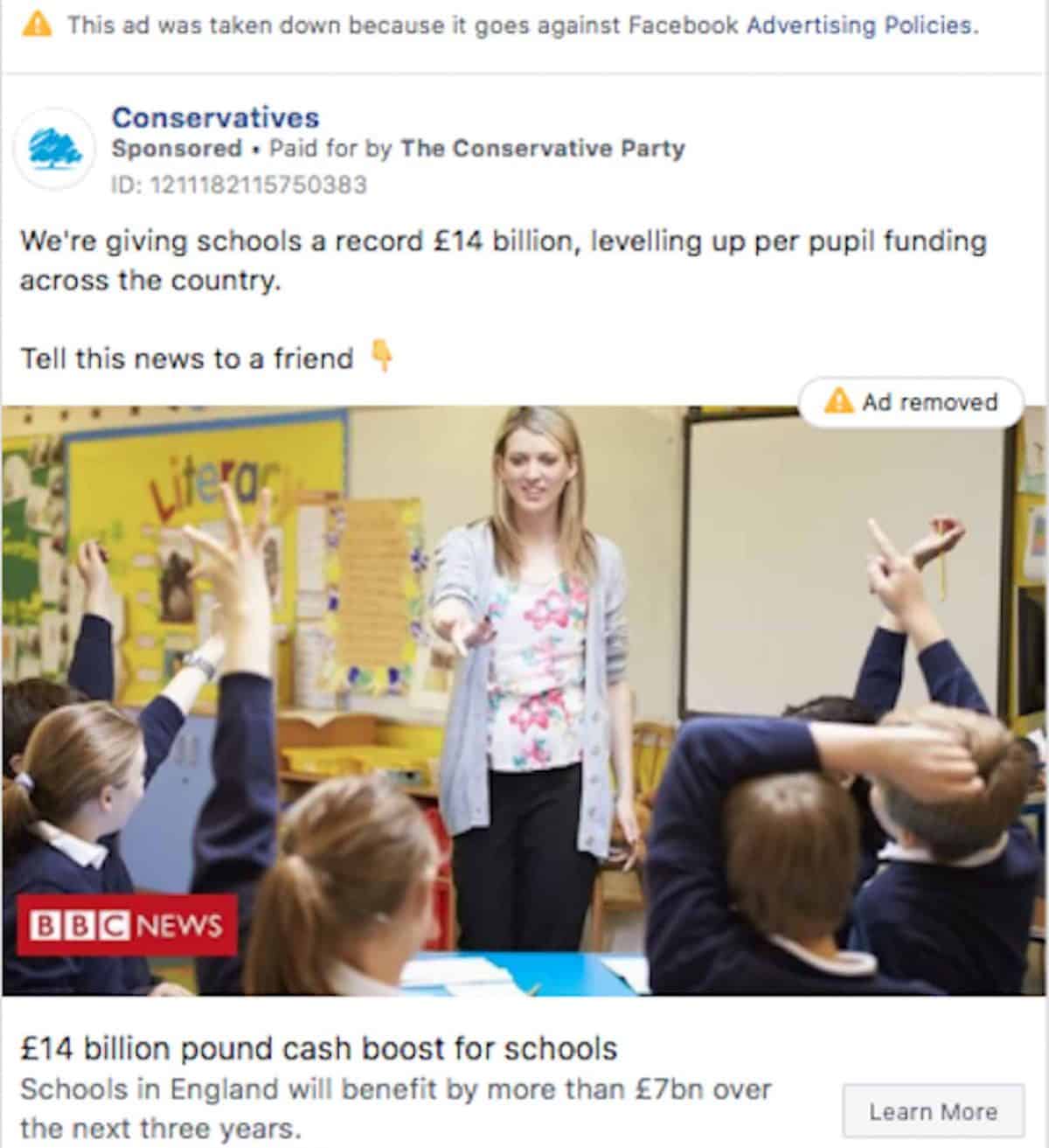 Facebook has removed a swathe of Conservative Party ads that faked headlines in a BBC news story.

The Tory party under Boris Johnson has ramped up spending on advertising on social media and they have publishing hundreds of ads on Facebook with similar messaging.

Fact-checking charity Full Fact uncovered ads which linked to a BBC News item which purported to have the headline “£14 billion pound cash boost for schools”.

But the actual headline in the BBC News story was “School spending: Multi-billion pound cash boost announced” with the news story putting the schools spend at half that: £7.1bn.

In actual fact, teaching bodies and even the Institute for Fiscal Studies have slammed Conservative claims of a spending increase, explaining that it will only bring schools to where they were 13 years ago when inflation is taken into account, making the Tories’ spending pledge actually an “unprecedented spending freeze.”

“Describing this as a £14bn increase would make the government seem more generous than it is in fact being,” BBC statistician Robert Cuffe wrote in the actual BBC news item the Conservative ads link to.

The ads with doctored headlines were viewed between 220,000 and 510,000 times on since Sept. 2, according to Full Fact, a third-party fact-checking coalition founded by Facebook which discovered the Tory slight of hand.Facebook has reacted by banning the adverts from its social network.

“People can see how our tools were misused”

A Facebook spokesperson told the BBC the advert would be kept as an example in their ad library so “people can see how our tools were misused”.

They added: “We are working to put safeguards in place to ensure publishers have control over the way their headlines appear in advertisements.”

Will Moy, chief executive of Full Fact said: “It is wrong for the work of independent journalists to be altered in this way and misleading for readers.

“This Government has previously agreed that UK election law must be updated and that the integrity of our elections is at risk.

“With an election increasingly likely, emergency legislation is needed to ensure online campaigning and advertising is truly open and transparent, as recommended by the cross-party DCMS committee.

“Full Fact will be scrutinising the use of political advertising by all sides throughout the election campaign, and we will now be specifically looking for any other examples of independent news being misrepresented by any political advertiser.”

“It was not our intention to misrepresent.”

A Conservative Party spokesman told the BBC: “It was not our intention to misrepresent by using this headline copy with the news link, where the BBC’s £7bn figure is clearly displayed, but we are reviewing how our advert headlines match accompanying links.”

Last week we reported how messaging similar to Tory ads on social media had been broadcast through school information screens to primary school children. The Conservative Party press office refused to comment.

And MP Ian Lucas, a member of the Department of Media Culture and Sports Select Committee, wrote about Michael Gove swerving unanswered questions about what he knew about unlawful spending by the Leave campaign. Michael Gove was the co-Convenor of Vote Leave’s Campaign Committee in the 2016 Referendum. He has admitted publicly that he knew of the payments to AIQ which led to the commission of electoral offences in 2016.

READ MORE: Why I am demanding answers from Michael Gove over Vote Leave offences