Some have accused the Tories of aping old BNP policies. Is it fair? 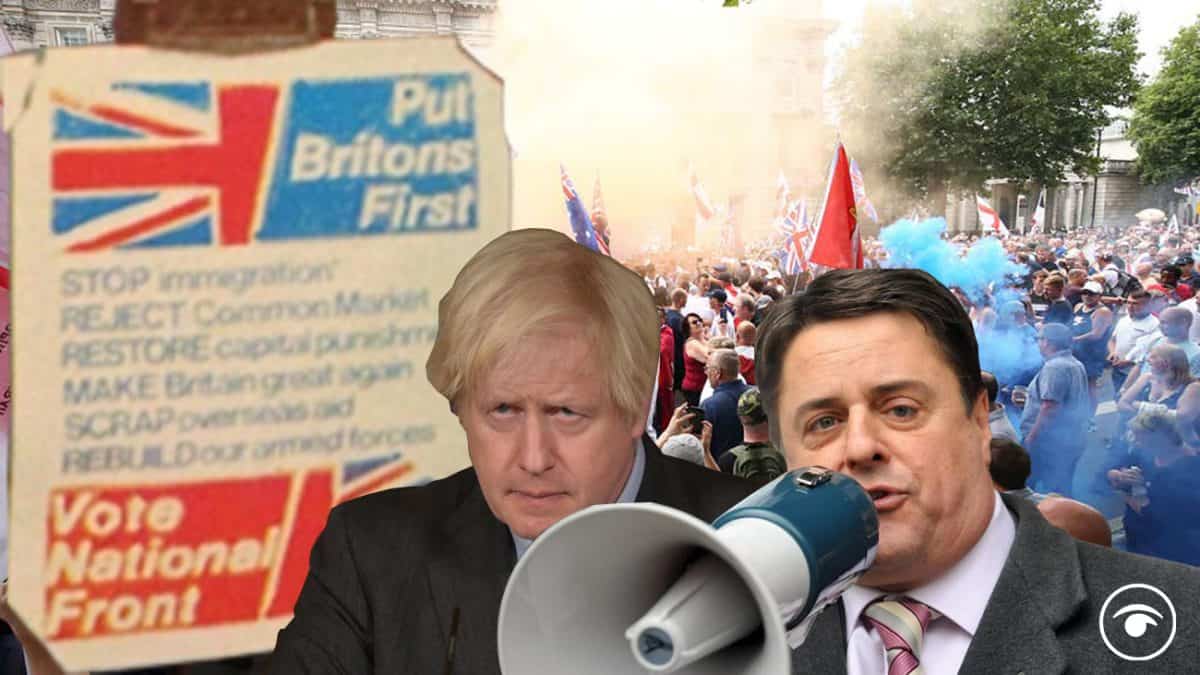 Last March, in the heat of Britain’s first salvoes with coronavirus, the former head of MI5 made a remarkable intervention that, given the unfolding national crisis, slid somewhat under the radar.

Lord Evans of Weardale, who led Britain’s domestic security service between 2006 and 2013, suggested that the threat of far-right terrorism in Britain could be diminishing following Boris Johnson’s election victory a few months earlier.

The supposed blunting of that threat was not, he said, because the ideological extremism which sustains the far-right was fading away. Instead it was because many of the “alienated” voters who are usually sucked into the British National Party (BNP) or English Defence League (EDL) felt as if their voices had been heard at the ballot box after the Conservative victory the previous December.

“Whatever you think of the outcome of the recent election in the UK, the fact that some of the legitimate concerns that were being used as a pretext by English nationalists have now been formally acknowledged at the ballot box might be a good outcome, even though it is sort of disconcerting for southern liberals,” the former MI5 director general – now a crossbench peer – said.

“There was a significant alienated and disenfranchised group out there who didn’t think the system was taking any notice of them. And that’s where you need to be concerned about extremists exploiting legitimate concerns.

“Disaffected English nationalists were manifesting themselves at the extremes in things like the British National Party and National Action, which fed the undertone that articulated itself as extreme rightwing terrorism.”

In the weeks after the election, it emerged that more than 5,000 supporters of far-right group Britain First – whose leaders were jailed for hate crimes against Muslims in 2018 had joined the Conservatives. “We will support a party that is willing to take a firm stance against radical Islam and it looks like the Tories are willing to do that,” the organisation’s spokeswoman said.

The Conservative Party’s drift towards the far-right has reared its head again this week, as the Guardian revealed that EU citizens are being offered financial incentives to leave the UK now that Brexit is done and dusted. Eagle-eyed viewers noted that the BNP had outlined a similar-sounding plan over a decade ago.

There are some caveats here. The BNP announced that it would offer “non-white Britons” up to £50,000 to leave the country – an overtly racist proposal that is a far cry from the government’s voluntary return scheme, which offers financial support up to £2,000 to encourage people to return to their country of origin.

Nonetheless it sparked accusations in some quarters that the Conservative Party were veering further and further towards the fringes. It is not the first time those claims have been bandied about.

This government is, undoubtedly, among the most right-wing in living memory. The home secretary has reportedly explored the idea of sending asylum seekers to a volcanic island in the South Atlantic. Many ministers seem more comfortable waging petty culture wars against the “woke left” and “BLM” than doing their actual jobs.

But far-right? Recent events in America – where the far-right was effectively patronised and co-opted by Donald Trump, with catastrophic consequences – surely puts that suggestion in perspective.

Allegations of authoritarianism ring a little hollow, too. For all the Dominic Cummings-era sabre-rattling with the media, Boris Johnson’s government holds regular press briefings wherein members of the press are able to ask questions of his Covid-19 response and hold the government to account.

The UK recently offered up to three million Hong Kong citizens a path to citizenship. Dominic Raab, the foreign secretary, imposed sanctions against Belarus after the country’s dictatorial ruler held a rigged election and crushed peaceful protests on the streets – moving before even the European Union.

The far-right poses a real and terrifying threat in this country, and the government has been too reluctant to meet head-on. One need only look to the “statue defenders” who descended on London to see as much.

Nor is there any doubt that the Tory party has swung hard to the right – and there are undoubtedly MPs in the party who veer dangerously close to extremism. It will be interesting to see how the party treats Desmond Swayne who, it emerged on Thursday, appeared on the antisemitic, conspiratorial Richie Allen Show last year.

But Jacob Rees-Mogg is not Tommy Robinson, and Johnson is not Viktor Orbán. Not yet, anyway.