Among the measures is an extra one-off payment for more consumers to help cover energy costs and an extension of the “9-euro ticket” for nationwide public transport. 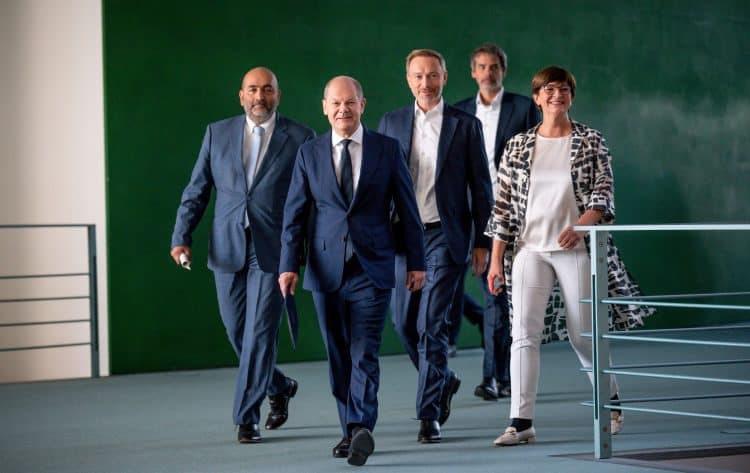 Germany will invest an additional 65 billion euros (£56 billion) in a new round of measures aimed at easing the sting of inflation and high energy prices for consumers, the country’s governing coalition has announced.

Among the measures is an extra one-off payment for more consumers to help cover energy costs, a planned price cap on the basic amount of energy consumption for families and individuals, and a successor to the country’s popular “9-euro ticket” for nationwide public transport.

At a news conference with leaders from the Greens and the pro-business FDP, the two coalition partners of his centre-left Social Democrats, Chancellor Olaf Scholz said: “Germany stands together in a difficult time. As a country, we will get through this difficult time.”

He said he is “very aware” that many Germans are struggling to cope with rising prices and the government is prepared to help. “We take these concerns very, very seriously,” he added.

In addition to the previously announced one-off 300 euro (£260) payment to workers to help offset energy costs, the government now plans to offer payments to other groups – retirees will receive 300 euros, for example, while students will receive 200 euros (£173).

To keep energy costs lower for individuals and families, the government announced a “price brake” on energy prices, saying it plans to offer a to-be-determined basic amount of energy to all at a lower rate.

The government will also develop a successor to its “9-euro ticket”, a nationwide ticket allowing unlimited travel on local and regional public transport.

The 9-euro (£7.80) per month ticket was announced for three months at the beginning of June as part of a government programme intended to help combat high inflation and fuel prices.

Although officials did not announce the new monthly price for this ticket going forward, the agreement released by the coalition pointed to suggestions of 49 euros (£42) or 69 euros (£60) and said it aims to offer something in this range.

Additional measures planned as part of the package include higher subsidies for families with children, a reform of housing subsidies, and larger payments for low-income individuals receiving government aid.

Mr Scholz’s government has faced pressure in recent weeks to indicate how it planned to follow through on its promise to help consumers shoulder the costs of inflation and higher energy prices.

In addition to rising wholesale prices for natural gas caused by Russia’s invasion of Ukraine earlier this year, German consumers will have to pay a new surcharge to prop up energy companies scrambling to find new supplies on the global market.

In July, when the government first began implementing measures to head off an energy crisis, Mr Scholz promised to ease the sting on consumers, saying “you’ll never walk alone”.

In recent weeks, the government had announced other actions to aid consumers, including the one-off payment of 300 euros for workers and lowering VAT on gas from 19 per cent to 7 per cent until the end of March 2024.