The Daily Mail's snowflake reaction to Joe Lycett and his iconic appearance on the BBC yesterday is worth its weight in gold. 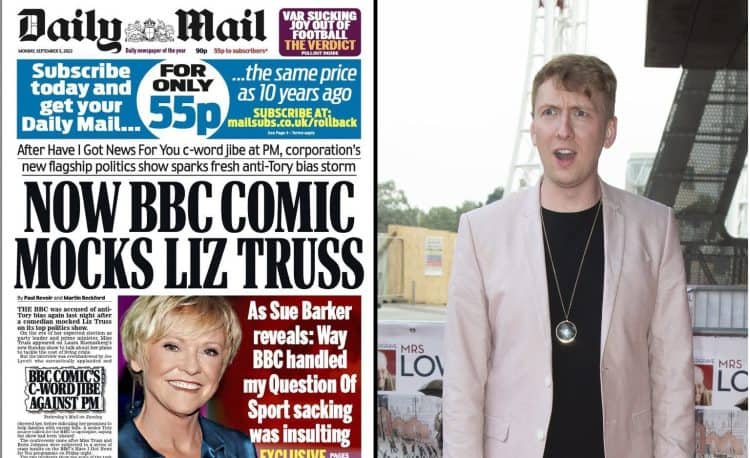 Mercy, he’s got them riled good and proper. Joe Lycett and his piss-taking prowess became one of the biggest national talking points over the weekend – and his appearance on the BBC’s new political vehicle has triggered those at the Daily Mail.

On strings, they are: Joe Lycett sends the Daily Mail into a rage

The right-leaning publication has damn-near blown a gasket on Monday morning, after Joe Lycett viral turn. The Brummie punster formed part of a political panel on Laura Kuenssberg’s Sunday show – and he dismantled Liz Truss with consummate ease.

Not only did the top comic sarcastically applaud and cheer the woman who is set to become the UK’s next Prime Minister, but he also poked fun at her vague answers and inability to set out a plan for soaring energy bills. Needless to say, it has upset all the right people.

The ‘keep your nose out of politics’ crowd were very vocal on social media – in a way they rarely are when, say, an obscure actor like Laurence Fox has something to say about the so-called culture wars. Nonetheless, Joe Lycett remains supremely unfazed.

The Daily Mail’s front page for 5 September is a manic exercise in pearl-clutching. Some anonymous Tory source is quoted in the piece, demanding that the BBC issues an apology for Lycett’s ‘absurd’ behaviour. Good luck with that, guys…

By the way, the headline itself borders on the unhinged: ‘NOW BBC COMIC MOCKS LIZ TRUSS’, it reads. As if the stand-up comedian has committed a crime so heinous, it deserves to knock the ongoing cost of living crisis off of page one.

On Saturday, the Daily Mail also whipped itself into a frenzy regarding jokes that were made about Liz Truss and Boris Johnson on Have I Got News For You. The publication is now doing everything it can to quell dissent against both the incoming and outgoing PMs.

So, this is a good one to remember the next time the Mail tries to tell you it is a ‘Champion of Free Speech’.