It begs the question, on the back of large scale tax cuts, how she envisages paying for such drastic measures. 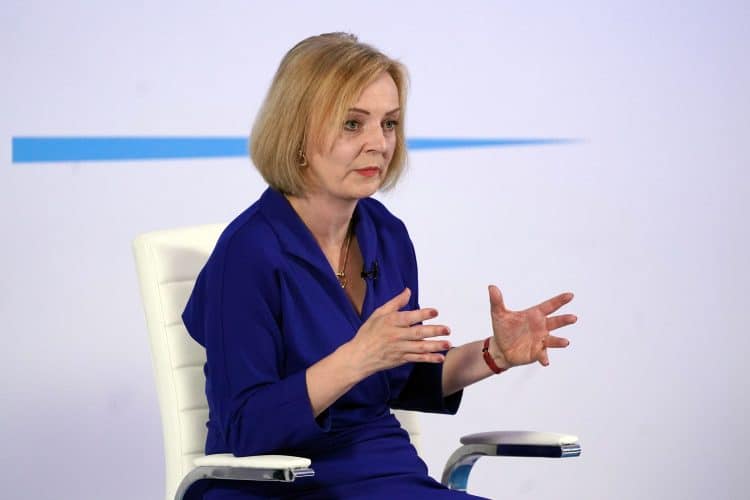 Liz Truss is strongly considering freezing energy bills in a bid to ease the burden on households this winter, according to reports.

The Foreign Secretary is widely tipped to win the Conservative leadership race on Monday, before being handed the keys to Number 10 the following day.

Having made tax cuts a key priority during her leadership campaign, Ms Truss had remained tight-lipped into Sunday about what kind of support package she might introduce as the UK faces the prospect of soaring energy bills and a worsening cost-of-living crisis.

But reports in The Daily Telegraph and The Times on Monday suggest Ms Truss will likely introduce an energy bills freeze in some form.

The Times reports the package could be on the scale of the furlough scheme introduced by then-Chancellor Rishi Sunak when the Covid-19 pandemic struck, while the Telegraph suggests the specifics of such a policy are still being debated.

Ms Truss had used an interview on the BBC on Sunday to insist that she would within a week reveal fresh supports for struggling households, but repeatedly declined to spell out what those support measures might look like.

“Before you have been elected as prime minister, you don’t have all the wherewithal to get the things done,” she told the Sunday with Laura Kuenssberg programme.

“This is why it will take a week to sort out the precise plans and make sure we are able to announce them. That is why I cannot go into details at this stage. It would be wrong.”

It comes as Kwasi Kwarteng, widely tipped to be the next Chancellor if Ms Truss is successful on Monday, used an article in the Financial Times to stress that the next Government will behave in a “fiscally responsible” way.

Mr Kwarteng said that there would be “some fiscal loosening” in a Truss administration to help households through the winter, stressing that it was the “right thing” to do.

He said that the UK does not need “excessive fiscal tightening”, pointing to the UK’s ratio of debt to GDP compared to other major economies.

“The OECD has said that the current government policy is contractionary, which will only send us into a negative spiral when the aim should be to do the opposite. But I want to provide reassurance that this will be done in a fiscally responsible way. Liz is committed to a lean state and, as the immediate shock subsides, we will work to reduce the debt-to-GDP ratio over time,” he wrote.

Mr Kwarteng, a close political and ideological ally of Ms Truss, offered a vision for how he would operate the Treasury as he said that the next Government would be “decisive and do things differently”.

“That means focusing on how we unlock investment and growth, rather than how we tax and spend. It is about growing the size of the UK economy, not burying our heads in a redistributive fight over what is left,” he wrote.

His comments directly echo those of Ms Truss on Sunday, as she insisted that her plan to reverse the rise in national insurance is “fair” despite it directly benefitting higher earners.

She told the BBC “growing the economy benefits everybody” and it is “wrong” to look at everything through the “lens of redistribution”.

Late on Sunday, Labour sought to accuse the Tories of stealing their ideas.

Nick Thomas-Symonds, the party’s shadow international trade secretary, told the BBC’s Westminster Hour that it was once again another example of his party “making the political weather”.

The announcement of the next Conservative leader is scheduled for early afternoon at an event in central London on the same day Parliament returns.

Both candidates have spent the last several weeks traversing the country and taking part in hustings in a bid to win over the 200,000 party members charged with choosing the next Conservative leader.

The winner will emerge as the third Conservative prime minister since 2016, when David Cameron quit after losing the Brexit vote, and will oversee a party that remains bitterly divided about the legacy of Mr Johnson and its future direction.

Voting closed last Friday and the contest will draw to an end when the formal announcement is made by Sir Graham Brady, chairman of the 1922 Committee of Conservative backbench MPs.

The new leader is expected to make a speech following the announcement, before spending the rest of the day finalising their choices for Cabinet and wider ministerial roles and writing their first prime ministerial speech.

Over the weekend, Mr Johnson urged his party to unite behind the contest’s winner.

“This is the moment for every Conservative to come together – and back that new leader wholeheartedly,” he wrote in the Sunday Express.

Once the result of the contest is known, Mr Johnson and his successor will go to Balmoral, rather than Buckingham Palace, for the appointment of the new prime minister on Tuesday, in a break from tradition.

Described by allies as likely to be a “very sad” occasion for the outgoing prime minister, the Queen will receive Mr Johnson on Tuesday at her Aberdeenshire home, where he will formally tender his resignation.

This will be followed by an audience with the new Tory leader, where she or he will be invited to form a government.