"253 people have been appointed by Liz Truss as trade advisers since July: 75% Men; 95% White; only one Black person. And this is the Minister for Women & Equalities!" 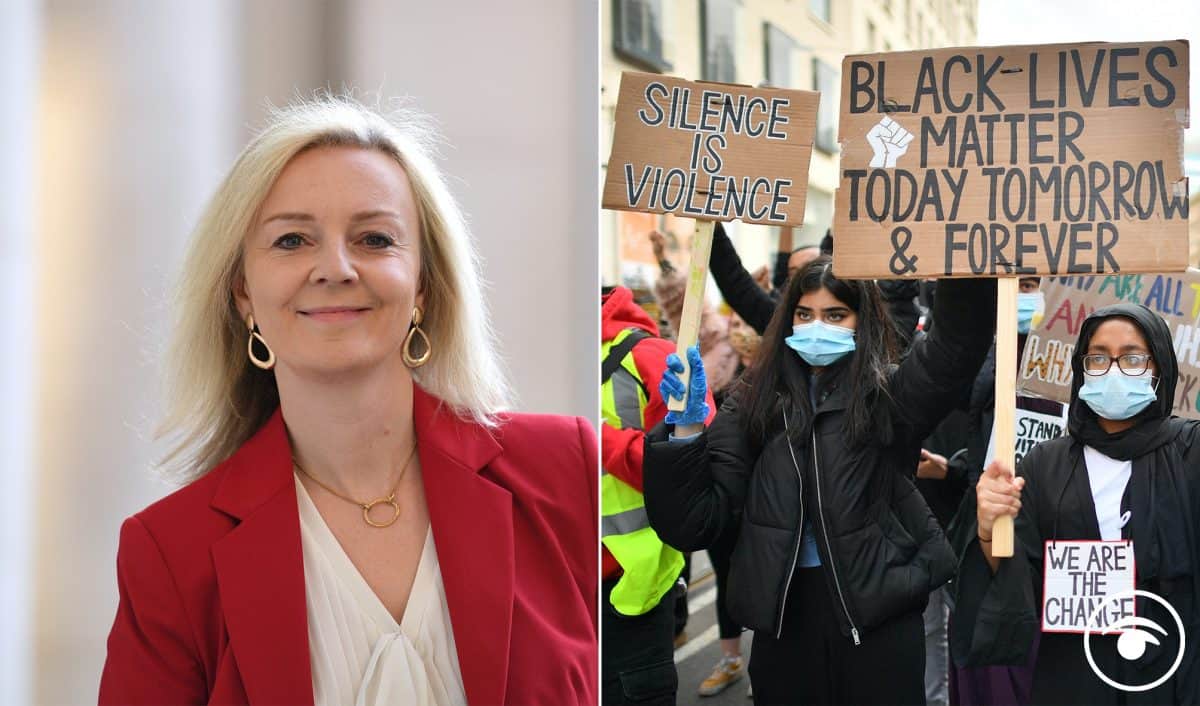 Today Equalities minister Liz Truss announced the government is promising to focus more on people’s social class and individual “character”, as it overhauls its equality policy.

She said the discrimination debate should not focus solely on race, religion, sexual orientation and disability.

Discussion had too often been dominated by “fashion” and not “facts”, she said.

Speaking at the Centre for Policy Studies think tank, Ms Truss said: “To make our society more equal, we need the equality debate to be led by facts, not by fashion.

“Time and time again, we see politicians making their own evidence-free judgements.”

This week it was revealed the gender pay gap has significantly widened at the Department for International Trade (DIT) run by women and equalities minister Liz Truss, new figures reveal.

Her comments have been met with a fierce backlash.

David Lammy Tweeted: “Liz Truss’ attempt to separate class from race is divisive garbage. We need to create a fairer society for everyone – but this means recognising that the barriers faced by Black, Asian and other minority ethnic people are facts not ‘fashion’. #BlackLivesMatter.”

Emily Thornberry Tweeted: “253 people have been appointed by Liz Truss as trade advisers since July: 75% Men; 95% White; only one Black person. And this is the Minister for Women & Equalities! No wonder she’s announcing today that Whitehall race & gender targets will be scrapped.”

Shadow equalities minister Marsha de Cordova said: “This is gratuitous provocation from a government that consistently refuses to face up to its responsibilities and the widening inequality it has caused.

“When Liz Truss dismisses ‘fashionable’ causes, she actually dismisses the devastating impact of discrimination and unfairness in people’s day-to-day lives.”

Today’s speech from the Women & Equalities Minister delivered a smoke and mirrors speech to the Centre for Policy Studies saying the Government has focused too heavily on ‘fashionable’ issues like race, sexuality and gender issues at the expense of poverty and geographical disparities, says the GMB union

GMB union has nonsensed todays speech and the ministers claims. Fighting deep rooted inequalities in society like sexism and racism must go hand in hand with fighting wider inequalities.

The union has also warned that today’s speech is ‘firing a shot across the bows of the Equality Act’.

Nell Andrew, GMB National Equality and Inclusion Officer has said:  “Whilst it would be hugely welcomed if the Government finally paid attention to the impact austerity has wrought on working people and communities over the last decade – it’s a shame that they’ve instead fired a clear shot across the bows of the Equality Act.

“If Liz Truss is serious in her ‘new fight for fairness’, she could start by enacting Section 1 of the Equality Act that was passed in Parliament 10 years ago and which successive Tory administrations have refused to act on. This would force public institutions to adopt effective polices to reduce the inequalities that result from class or socio-economic barriers.

“A drastic move away from recognising peoples lived experience, ignoring qualitive evidence, is a dangerous use of smoke and mirrors to attack equality and human rights legislation.

“All major equality and employment laws came about because of workers and communities organising around issues like racism, sexism and homophobia; fighting for more equal rights for everyone.

“These laws themselves were not dreamt up from the warm hearts of politicians, it has come from the blood, sweat and tears of people at the brunt of injustice fighting back”