It has been a bit of a bloodbath! 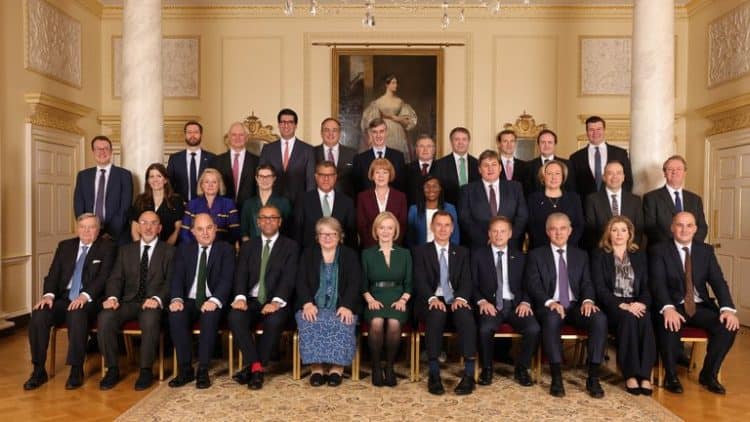 A number of cabinet ministers have announced their departures from Government as Rishi Sunak carries out a reshuffle.

Here, the PA news agency looks at the departures we have seen so far:

Boris Johnson ally Jacob Rees-Mogg quit as business secretary after conceding he would not get a job in Rishi Sunak’s Cabinet despite recanting his claim that Rishi Sunak is a “socialist”.

A source close to Mr Rees-Mogg told PA: “He knows he was very close to the previous two regimes and it didn’t seem likely he was going to be appointed in the new Cabinet.

“He’s happy to support the Prime Minister from the backbenches.”

Ranil Jayawardena was appointed environment secretary in September after previously serving as Minister for International Trade.

In a letter to Mr Sunak, he said: “My congratulations on your appointment. I know that you wish for a new team to join you in HM Government, so I write to stand aside.

“I will continue to work hard for the people of North East Hampshire, where it continues to be an enormous honour to serve as their local Member of Parliament. As it has been since 2015, I remain on their side.”

The outgoing Conservative Party Chairman, who was a champion of former prime minister Mr Johnson’s levelling-up agenda, was despatched as Tory Party chairman.

In a post on Twitter, he said: “It has been an honour to serve as the Conservative Party chairman, but all good things must come to an end.

“I relish the opportunity to serve our great party and my constituents from the backbenches once again.”

The outgoing Wales secretary was the first cabinet minister to switch to Liz Truss from Rishi Sunak in the previous leadership election.

In his previous role as justice secretary, he said he would resign from the Government if they broke the law “in a way that I find unacceptable” as Mr Johnson’s faced growing criticism over his Brexit plans.

Announcing his departure, Mr Buckland said: “I am grateful to you for our meeting earlier. At my request, I am writing to submit my resignation from the government.

“You can be assured of my support from the backbenches as we deal with the economic and security crisis that faces us.”

Kit Malthouse, who was a deputy under Mr Johnson when he was London mayor, announced his departure as education secretary.

In a Twitter post, Mr Malthouse said: “As I leave the Department for Education, I do so with profound gratitude to officials, my private office team, and brilliant advisers, who all worked so hard.

“I hope my successor can harness their commitment to the most important mission in Whitehall: the future and welfare of our children.”

Simon Clarke, who was chief secretary to the Treasury under Rishi Sunak when he was chancellor, indicated he is out of the role of levelling-up secretary.

He tweeted: “It has been a great privilege to serve as Secretary of State @luhc, working alongside some terrific people to #LevelUp our communities, just as it was before that as Chief Secretary @hmtreasury.

“It has only been while holding these positions that I’ve come to appreciate the full weight of responsibility that ministers bear, and we are deeply fortunate to be supported in this by our civil servants and special advisers (and never forget them on days like today).”

Chloe Smith is no longer DWP secretary despite supporting Mr Sunak in the leadership contest.

In a Twitter post, Ms Smith said: “It has been a privilege to serve as the Secretary of State for Work and Pensions and I would like to thank all of the brilliant staff at @DWP for their dedication to helping people into work and protecting the most vulnerable.

“I look forward to supporting @RishiSunak from the backbenches & continuing to work hard for my constituents in Norwich North.”

Wendy Morton has revealed she is no longer chief whip and is returning to the backbenches under Rishi Sunak’s new government.

She tweeted: “Heading to the back benches from where I will continue to represent the constituents, businesses and communities of Aldridge-Brownhills.”

It comes almost a week after Ms Morton’s status as chief whip was in the balance amid speculation she had resigned over the fracking vote in the Commons last Wednesday, only for Downing Street to insist she remained in the post hours later.

Brandon Lewis, one of the longest serving cabinet ministers, also announced his return to the backbenches.

He said: “Our party is at a crossroads. We now have an opportunity to reunite and rebuild, and we must take it. We must come together and deliver the mandate we were given by the British people.

“We have a duty to the country to do so, at a time of economic hardship for so many. It is no exaggeration to say that the future of the Conservative Party and everything we stand for is at stake if we do not.

“You will have my support from the backbenches in addressing the economic crisis we face, bringing our party together and delivering on the promises we put forward in the 2019 manifesto, on which we won such an overwhelming majority.”

Vicky Ford announced she had left her role as minister of state in the Foreign Office.

She tweeted: “There is no greater honour than representing the UK overseas. I am sorry to leave the @fcdo but wish my successor and @RishiSunak all the very best.

“Thank you to all the amazing FCDO staff across the world. It has been wonderful to work with you.”