Two protesters sprayed orange paint across the facade of 55 Tufton Street in Westminster on Tuesday. 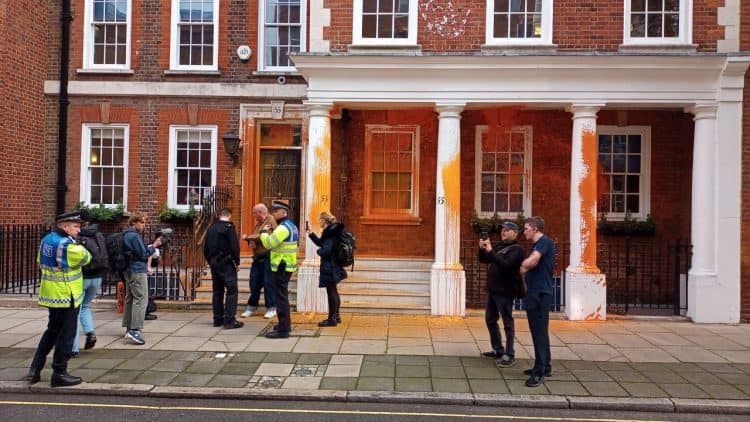 Two protesters sprayed orange paint across the facade of 55 Tufton Street in Westminster at around 11am on Tuesday.

Just Stop Oil said they were targeting the HQ Global Warming Policy Foundation (GWPF), which aims to combat what it sees as harmful climate policies.

The GWPF, founded by former Conservative chancellor Nigel Lawson, is among several lobby groups and think tanks with offices in the building.

The spray paint came as part of a wider protest which saw a total of six protesters block Horseferry Road at the junction with Tufton Street in Westminster on Tuesday morning.

The group disrupted traffic as they sat in the road holding Just Stop Oil banners.

A spokesperson for Just Stop Oil said: “We’re on the streets of London because politics is broken.

“It was broken here in Tufton Street by shady, opaquely funded lobbyists who now stalk the corridors of power thanks to Liz Truss.

“Decades of climate denial and delay, which they promoted, mean that we now face an existential crisis,” they added.

“Liz Truss’s toxic pro-oil policies helped end her career – and unless we ditch them, they’ll finish us off too. We cannot afford new oil and gas.”

The organisation continues its month-long series of protests as it calls for the Government to halt all new oil and gas licences and consents.

The GWPF’s headquarters at 55 Tufton Street has previously been targeted by climate group Extinction Rebellion.