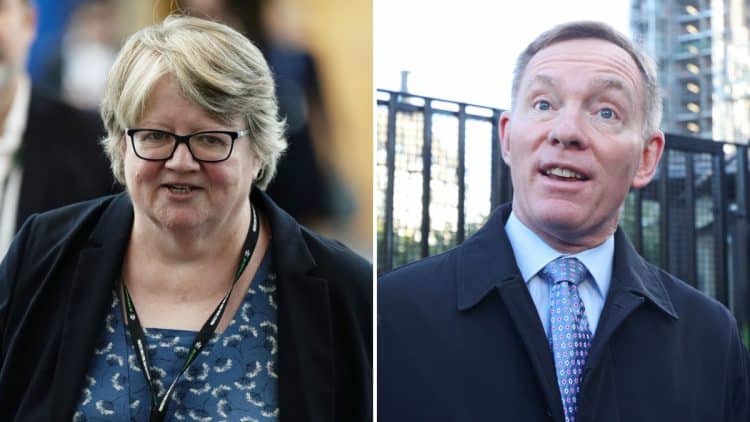 Cabinet ministers Therese Coffey and Jacob Rees-Mogg are among a group of senior Tories accused of bullying Conservative MPs into voting against a Labour motion on fracking.

Amid extraordinary scenes at Westminster, one Tory MP was “physically manhandled” into the “no” lobby to ensure he opposed the motion, according to opposition MPs.

Mr Rees-Mogg, the Business Secretary, insisted he had seen no evidence of anyone being manhandled and there had simply been a “normal” discussion among MPs as they prepared to vote.

“It is a pitiful reflection on the Conservative Parliamentary Party at every level and it reflects really badly, obviously, on the Government of the day,” he told BBC News.

The chaos erupted shortly before the vote at 7pm, after climate minister Graham Stuart announced in the Commons chamber that, contrary to what MPs had been told earlier, it was not being treated as a vote of confidence in the Government of Liz Truss.

Until that point, Tory MPs had been on notice that they would have the whip withdrawn and would be expelled from the parliamentary party if they failed to support the Government.

Senior Labour MP Chris Bryant said there was pandemonium outside the division lobbies, with MPs opposed to the lifting of the moratorium on fracking uncertain what would happen to them if they voted with the opposition.

In the chaos, Mr Bryant said that Alex Stafford, the Tory MP for Rother Valley, was bundled into the “no” lobby.

“There was a bunch of Conservative members obviously completely uncertain whether they were allowed to vote with Labour or against it,” he told Sky News.

“There was a group including several Cabinet ministers who were basically shouting at them. At least one member was physically pulled through the door into the voting lobby. That is completely out of order.

“It was Alex Stafford. He was, to my mind, physically manhandled into the lobby.”

Another Labour MP, David Linden, said he saw Ms Coffey, the Deputy Prime Minister, “practically pick up a hesitant Tory MP and march him into the Government lobby”.

Ms Coffey denied the claim, with a source close to her telling the PA news agency: “She didn’t manhandle anyone.”

Mr Rees-Mogg said he had not seen any bullying when the vote took place.