The Tory Party is in disarray, but MPs won’t sign their own death warrant just yet. Is it time for a general strike? 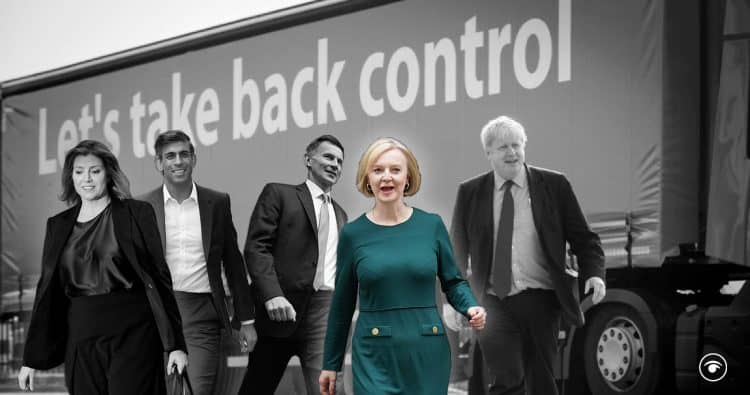 Good morning. The Labour Party is on election footing following a disastrous few weeks for the government in which they had to row back on almost all mini-Budget policies in a humbling face-saving and market-stabilising exercise. Jeremy Hunt announced on Monday that they will no longer proceed with the income tax cut, the two-year energy price cap, the scrapping of the 45p rate, the freeze on corporation tax, the freeze on alcohol duties and their VAT-free shopping reforms for tourists. Everything, then. A U-turn for the ages, you might say, in an age where rapid reversals are ten a penny.

After waiting years for their own pet PM, the Tufton Street cabal of ‘think tanks’ have had to wait just a matter of weeks to find out how their fantasy visions of Britain work in practice. Hunt has put them firmly back in their box, alongside the other hard-right factions that have infiltrated the Tory Party by kicking their ‘low tax/ low regulation’ agenda into the long grass. But he has hardly sated the centre-right either. More brutal public spending cuts are on their way in what Labour are describing as “austerity 2.0”. By next spring, households could face a ‘cliff edge’ as the energy price freeze comes to an abrupt end. Poverty campaigners have warned that without urgent reform of the energy market, which does not appear to be forthcoming, many people could be faced with unprecedented financial pressures at the very worst time.

Truss’s only hope in the short term is that the markets calm somewhat, energy prices come down, inflation drops and the economy grows. But as the above shows, she is clearly playing with forces beyond her Ken. Pat McFadden asked shortly after Hunt’s emergency budget was announced which policies she now believes in; The ones of her former chancellor that she campaigned on during the Tory Party leadership contest or the ones of her new chancellor, who has just reversed them all in their entirety? Liz Smith, the Scottish Conservative finance spokeswoman, said Truss has just days to turn this around in order to save her job, while three MPs have already publicly called for her to go and, if reports are to be believed, Sir Graham Brady has been inundated with letters, suggesting Truss is a dead woman walking.

So the prospect of a new leader appears to be on the horizon. George Osborne says Truss is now a ‘pino’ – prime minister in name only – and there is talk of a ‘pensioner alliance’ of Tory grandees being installed to steer the party through the coming months with Hunt at the helm. In the event that Truss/ Hunt are replaced in a leadership election by Rishi Sunak or Penny Mordaunt (or both) that will be four new leaders since the British public last had their say in the matter, which seems terribly undemocratic. Little wonder half a million people put their name to a petition demanding a general election and nine in ten businesses say they want one too.

But there’s slim chance they will get one as things stand. Only the Prime Minister can call a snap election. Labour could call a no-confidence vote, but without the support of the majority of MPs (which they won’t get) the motion will not pass. Faced with almost certain defeat, there won’t be a Tory MP in the Commons willing to sign their own death warrant. That leaves the general public with only one realistic option: a general strike demanding a General Election. As we have seen this summer, workers are more organised than they have been in many years, and the worst is still to come as the cost of living crisis really shows its teeth. Such a large movement could force Truss’s hand, and in doing so, trigger the inevitable capitulation of the Tory Party.