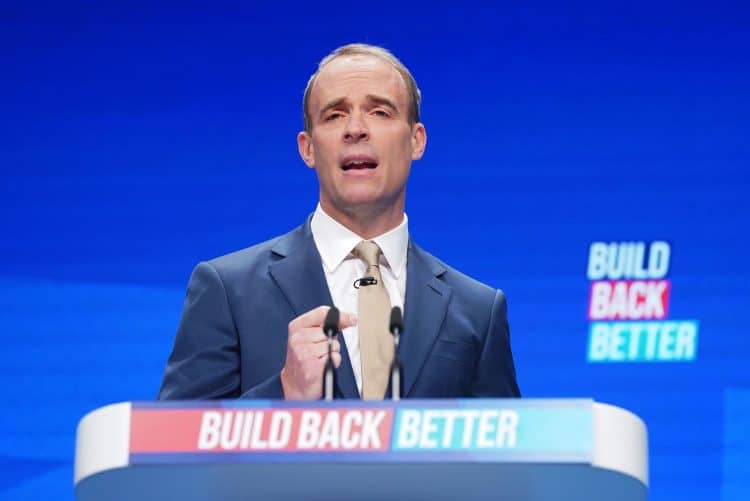 Dominic Raab has promised to overhaul the Human Rights Act to end “abuses” of the legislation, sparking a backlash from campaigners about the possible loss of basic protections.

The Justice Secretary said Boris Johnson had given him the task of rewriting the law when he moved him from the Foreign Office in September’s reshuffle.

Raab said the move would bring “common sense” to the justice system, but campaign group Amnesty warned “politicians should not be removing the rights of ordinary people with the stroke of a pen”.

In his speech to the Conservative Party conference in Manchester, Mr Raab highlighted the case of a drug dealer “convicted of beating his ex-partner” who claimed the right to family life to avoid deportation.

“It is absolutely perverse that someone guilty of domestic abuse could claim the right to family life to trump the public’s interest in deporting him from this country. We’ve got to bring this nonsense to an end.”

At a fringe event, Raab said the problem was with the powers the domestic legislation had given to judges, rather than the European Convention on Human Rights itself.

“The problem is not the convention, it’s the way it has been interpreted and in particular the licence given to the courts in this country under the Human Rights Act to adopt, through judicial legislation, ever more elastic interpretations of rights.”

In his speech, Raab said the government will “transform” the way the justice system treats violence against women.

He said he was “shocked and horrified by the harrowing murders of Sarah Everard and Sabina Nessa”.

And he said: “Making our communities safer, so that women can walk home at night without having to look over their shoulder, as your Justice Secretary, that is my number one priority. We will transform the way the justice system treats violence against women.”

The transformation will include from the time it takes to examine phone evidence to the “potential ordeal” vulnerable victims can face at trial, he said.

Raab acknowledged that backlogs in the justice system, built up during the pandemic, could take six to 12 months to clear.

His plan to rewrite the Human Rights Act is the latest attempt by Tory ministers to tackle the legislation, which enshrined the European Convention on Human Rights into domestic law.

Sacha Deshmukh, Amnesty International UK’s CEO, said: “The Human Rights Act has been key to some of the biggest justice fights over the last 30 years – from Hillsborough and the Mid Staffs hospital deaths, to years of human rights violations against women activists in the Spycops scandal.

“The deeply unacceptable delay to setting up a public inquiry into the government’s handling of the Covid pandemic is just one example of why the Human Rights Act is so important.

“The Human Rights Act is a key protection against an overmighty government – and we need it now more than ever.

“Politicians should not be removing the rights of ordinary people with the stroke of a pen, whilst giving evermore powers to the police and protecting members of the establishment from proper scrutiny. That’s the complete opposite of justice.”

Shadow justice secretary David Lammy said: “After 11 years of Tory government, court backlogs have reached record levels, violence and self-harm in prisons have soared, rape convictions have plummeted, and many women have lost confidence in the criminal justice system.

“Yet instead of addressing any of these problems, the new Justice Secretary chose to focus on vague threats to take away ordinary people’s rights.”