"Hits you in the gut, doesn’t it?” Roger Hallam explains why he would happily block an ambulance in order to insulate Britain. 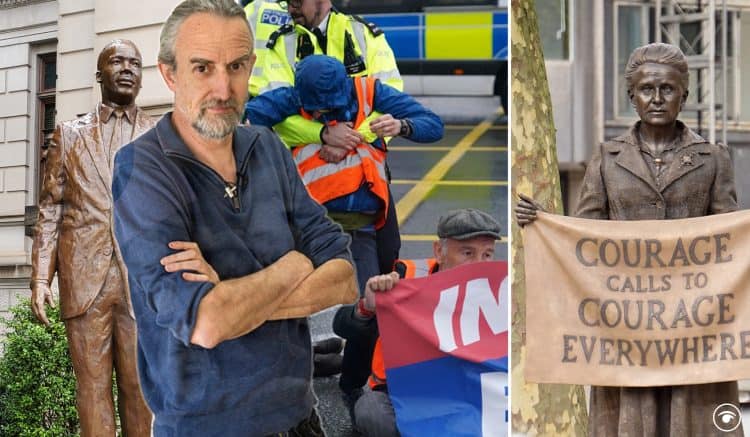 Insulate Britain are “irresponsible crusties” who are “trying to stop people going about their day’s work” and “doing considerable damage to the economy”. That, at least, is the view of Boris Johnson. The prime minister weighed in on the road-blocking band of environmental activists on Tuesday morning, the day after the group kicked off its fourth consecutive week of direct action. It is likely to be its most controversial yet.

Early on Monday morning, a clip of Insulate Britain protestors blocking the Blackwall Tunnel spread round social media like wildfire. In it, a driver is filmed pleading with protestors to make way so she could visit her elderly mother in hospital. “How can you be so selfish?” the driver asked. As luck would have it, the Blackwall blockade began just as Roger Hallam – the co-founder of Extinction Rebellion who has helped plan Insulate Britain’s activities over the past month – was sitting down in a studio for an appearance on TLE’s new podcast: Unbreak the Planet with Mike Galsworthy.

Hallam was asked whether he would have moved to accommodate the woman seeking to reach her mother’s bedside. “I’d stay there,” he replied. He’d stay there even if it meant blocking an ambulance seeking to carry a dying person to a hospital, he added. His comments, unsurprisingly, made headlines – adorning the front page of Tuesday’s Metro, the most-read newspaper in the UK. They were carried too, with suitable vitriol, by the Sun, Daily Mail, Daily Telegraph, Times and Daily Express.

‘People get hurt in political disruption’

“Civil resistance is not purist, elite university ethics course discussion stuff,” Hallam – who, it should be noted, was speaking in a personal capacity – added. “People get hurt in political disruption.” But “it’s a means and ends process”, he argues, suggesting that in “all civil resistance episodes” – from suffragettes through to Martin Luther King – “there’s often damage and distress – and sometimes deaths”. Those comments obviously feed into the dominant press narrative of modern environmental activism, which paints Insulate Britain and Extinction Rebellion as class-deaf and selfish.

Under-riding that narrative is an implicit suggestion that, if only the protestors were a little nicer and played within the rules, they’d get a lot more traction. But Hallam disagrees. Last month he told me he believed that there has been an “eerie sort of phoniness” to the press reaction to Extinction Rebellion and, now, Insulate Britain since the former’s emergence in 2018. The narrative is that activists “are all terrible people,” he said. “Whereas the reality of what Extinction Rebellion has been saying is: if you don’t get on with the job, we’re facing the end of civilisation.”

What is the purpose of the protest?

All of this leads to a few deceptively difficult questions: what is the purpose of protest, and who is it for? Do Extinction Rebellion and Insulate Britain need to be loved by the public to further their aims? By raging at hypothetical moral blindspots, are we wilfully finding reasons to turn a blind eye to the immediate and impending impacts of the climate emergency?

Hallam, it’s fair to say, couldn’t care less. Extinction Rebellion, he suggested, is  “not going to stop because 70 per cent of the British public don’t like it”. He believes the public “needs to realise it has responsibilities to its children” – and that there’s something slightly cowardly about people saying they agree we’re facing the biggest existential crisis in the history of humanity, and not going into rebellion against the government.”

‘Over our dead bodies’

He expanded on that view on Unbreak the Planet. The ambulance comments, he admits, “make me look like some devil”. But he sees it differently. “We have a government that is systematically facilitating the destruction of this country,” Hallam told Galsworthy. “We’ve had thirty years of people saying the planet is fucked up – that’s classic separation psychology. It’s like there’s a plant there, and it’s a little unfortunate it’s going down the drain.

“When we frame it like that, it becomes part of our mainstream political, radical tradition, which is: over our dead bodies do we allow evil to happen. Hits you in the gut, doesn’t it?”

It does. And, within that context, it’s easy to see why Insulate Britain is blocking the roads. It’s entirely logical that Hallam would want to prevent an ambulance from reaching a hospital – because it’s all in pursuit of, in his mind, rescuing the greater good. Is he right? Time will tell. The fact remains that, today, we’re talking more about his incendiary remarks than about Insulate Britain’s actual goal, which is hardly outlandish: insulate all homes in the country by 2025 – starting with social housing.

But it is also true that direct action works. Strikes, sit-ins, occupations and blockades have proven consistently more likely to succeed than less disruptive alternatives like petitions and marches. Their methods may be controversial, and their language insensitive, but it would be no great surprise if Insulate Britain and Extinction Rebellion are eventually remembered much more fondly than today’s newspapers suggest.

What do you think? Watch the second full episode of Unbreak the Planet with Mike Galsworthy below and get in touch.

Related: Labour faces years in the wilderness until it faces up to the realities of Brexit