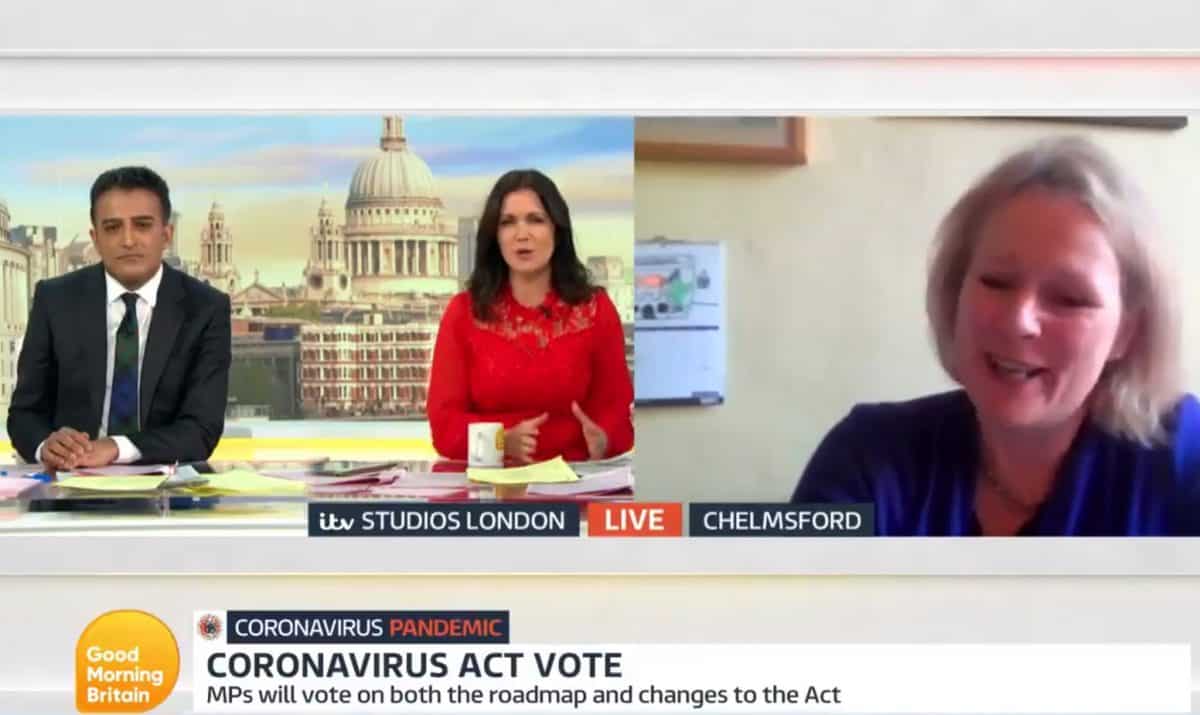 The children’s and families minister found herself in hot water this morning after she tried to take credit for Marcus Rashford’s free school meals campaign – despite voting against it.

Vicky Ford was met with disbelief by hosts Adil Ray and Susanna Reid after she claimed the footballer ‘didn’t have the impact we all think’ in encouraging Boris Johnson’s government to offer extended help with free meals for school children during the holidays and closure of schools during the coronavirus outbreak.

That is despite the government changing its mind twice after the Manchester United star piled on the pressure to provide for vulnerable children during school holidays.

“This is not politics, this is humanity”

In October last year Labour’s last-ditch attempt to see the free school meal scheme extended over the school holidays until Easter 2021 was overwhelmingly rejected in parliament.

In shameful scenes, Tories voted down the motion, which was defeated by 322 votes to 261, with Child Poverty Action Group saying ” We’ve reached a low point” with the Government ducking its “moral responsibility”.

England starlet Rashford slammed the situation, lamenting that this is “not politics, this is humanity.”

The following day The Mirror named and shamed every MP who voted against it, including Ford, on its front page.

“Why did that have to happen?”

Taking her to task on Good Morning Britain today, Susanna grilled the MP for Chelmsford about the issue asking: “The sort of outstanding theme has been, why did it take a footballer to extend that free school meals?”

Almost immediately, the Children’s minister could be seen shaking her head as Susanna added: “Why did that have to happen? Why is it the work of Marcus Rashford that made that happen?”

Vicky Ford said: “No, it isn’t actually Susanna, I had extended the free school meals to more groups of children right at the beginning of this lockdown and the eligibility of free school meals and a very very challenging and very very early on that national voucher…”

Before Vicky could continue, Susanna interjected with: “So are you saying the work of Marcus Rashford was irrelevant?”

“Twice he had to intervene!”

The minister added: “I absolutely, hugely respect the work of Marcus and the campaign he’s been doing in putting extra support in”, before speaking about a pilot scheme for food support the government have been trialling for the last three years which she then claimed the government were preparing to roll out nationally before the England footballer intervened.

Bemused, Adil Ray asked: “I just need to clarify, because people at home will be screaming at the telly, are you saying that you would have been doing this anyway, regardless of what Marcus Rashford did and the call with the Prime Minister?

“Twice he had to intervene! Are you saying he was wasting his time? You were doing it already? Surely you’re not saying that are you?”

Vicky again explained the government had been piloting a similar holidays food support scheme for the last three years, something Adil was unhappy with:

“We could talk about at a great deal, but you mention piloting but certainly not on the grand scale that was required, which needed people like Marcus Rashford to intervene.

“I cannot believe you are here on national television telling people this morning and saying ‘Marcus didn’t have the impact we are all lead to believe.'”

The Children’s Minister (who voted against free school meals twice) claiming credit for Marcus Rashford’s work before thanking him for shaming the shits into a u-turn pic.twitter.com/R5ZNI6izmr