Tory MPs said they "did not believe in nationalising children" ahead of the vote, with one saying children have been going hungry "for years". 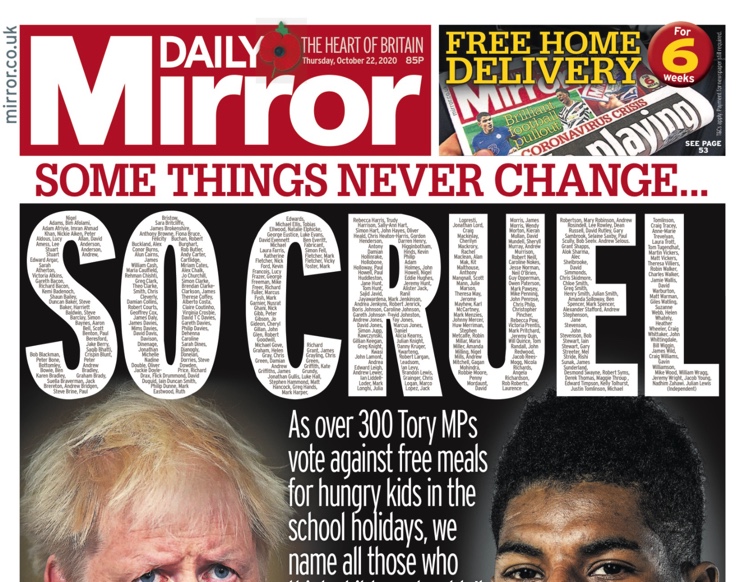 The Daily Mirror splashed the names of every MP who voted against free meals for hungry kids on its front page today.

Marcus Rashford’s bid to extend free school meals over the holidays was dealt a blow after MPs voted against the measure last night.

In shameful scenes, Tories voted down the Labour motion, which was defeated by 322 votes to 261, with Child Poverty Action Group saying ” We’ve reached a low point” with the Government ducking its “moral responsibility”.

He told the Commons: “And we must focus on breaking the cycle where the first reaction is to look to the state.

“It is a vicious circle, and we need to support families with early intervention and help with things such as budgeting and employment.

“The welfare state is rightly there as a safety net, but it is not however a replacement.

“Where is the slick PR campaign encouraging absent parents to take some responsibility for their children?

“I do not believe in nationalising children.

“Instead, we need to get back to the idea of taking responsibility, and this means less celebrity virtue-signalling on Twitter by proxy and more action to tackle the real causes of child poverty.”

“Children have been going hungry for years”

Tory MP Miriam Cates (Penistone and Stocksbridge) said a food voucher scheme over the school holidays would only ever be a “sticking plaster” for tackling child poverty.

Conservative minister Paul Scully also told the BBC that “children have been going hungry under a Labour government for years” and insisted the Government had been tackling the issue.

Reacting to the vote, shadow education secretary Kate Green said: “Boris Johnson and the Conservatives have badly let down more than one million children and their families.

“No child should go hungry over the holidays, but the Government is blocking the action needed to prevent this.

“We pay tribute to Marcus Rashford and others for shining a spotlight on this incredibly important issue.

“This campaign is not over and the Government must reconsider.”

The Daily Mirror today rounded on the more than 300 Tory MPs who voted against extending free school meals through the holidays, calling them “So cruel”.

Printing every name on its front cover, the newspaper called out the “heartless” MPs as hard up families struggle with the second wave.

Here’s a full list of MPs who voted against the motion: