After yet another U-turn, we tallied every time Boris Johnson has changed his mind about Covid-19. 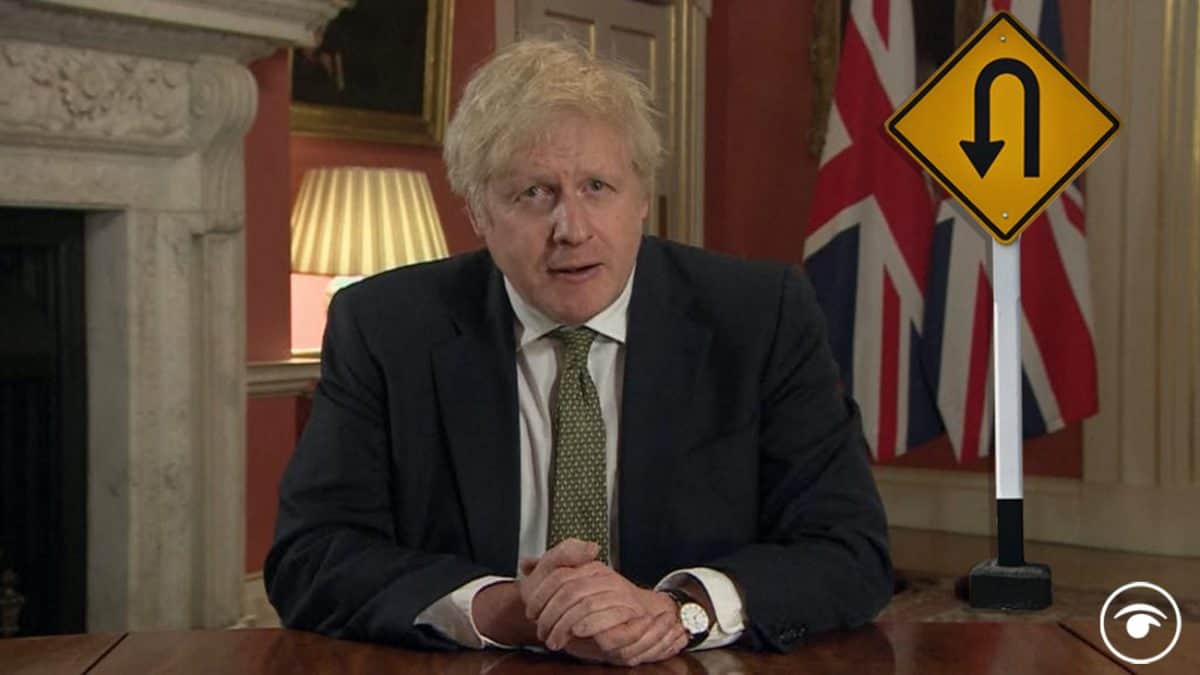 England is back in lockdown and, as has been the case throughout the coronavirus crisis, it felt inevitable long before it came to pass.

Boris Johnson’s response to the pandemic has been characterised by U-turns; promising that something would or wouldn’t happen, only to bow to pressure days later.

There are almost too many to count, so forgive us if we miss a few out. But here are at least the most significant of the government’s Covid-19 U-turns.

As recently as Monday morning, Johnson was on the airwaves insisting that schools were safe – and that parents should send their kids to classrooms.

“Schools are safe. It is very, very important to stress that and the risk to kids, to young people … to staff is very small,” he told the BBC on Sunday morning – even as infections continued to spiral, and teaching unions lined up to oppose the policy.

Within hours, after some primary school students had been back at school for just one day, Johnson addressed the nation from Downing Street – and shut schools until February.

On 16 December, the prime minister insisted: “We don’t want to ban Christmas, to cancel it, and I think that would be frankly inhuman and against the instincts of many people in this country.”

We all know what happened next. Four days later, Johnson announced that London and vast swathes of the southeast of England would be put under new, Tier 4 restrictions – meaning plans for Christmas mixing between families had to be cancelled at short notice.

Rashford at the double

Not content with being forced into one about-face by Manchester United and England star Marcus Rashford, Johnson once again opposed the footballer’s campaign to get the government feeding children from poorer backgrounds during school holidays.

Having spent weeks insisting that, this time, he would not stump up the cash, ministers soon announced a £170 million winter grant scheme to help struggling families.

Rashford had previously forced the government to change its policy over the summer holidays, too – just one day after Johnson’s spokesman said the government would not change course.

When Sir Keir Starmer, the Labour leader, called for a “circuit-breaker” lockdown in October, Johnson accused him of “opportunism” – even though he was echoing the calls of Britain’s scientific community.

On 31 October, Johnson eventually announced new four-week lockdown, encompassing the whole of November, shortly after Wales had announced their own two-week shutdown.

If there’s one minister who has pushed Johnson close when it comes to changing his mind, it’s Gavin Williamson.

Back in August – a day after Downing Street insisted that pupils would be safe without them – the education secretary made it mandatory for secondary school children in areas with tight restrictions to wear face masks in school.

A new NHSX app for contact tracing was announced by Matt Hancock – the health secretary – on 12 April, pledging that it would be “crucial” for preventing the transmission of coronavirus.

However, on 18 June, the Government abandoned plans for its own app, instead allowing Apple and Google to take over the project.

In early May, Williamson set out the Government’s ambition that all primary-age children in England would have at least four weeks in school before the summer.

But on 9 June, he said there was “no choice” but to scrap those plans amid concerns that the two-metre social-distancing rule would make a full return impossible.

At the Government’s daily briefing on 1 May, Hancock said testing figures had hit 122,347 on 30 April.

It suggested that the number of tests actually processed was closer to around 81,978 – short of the target.

After criticism that care workers, cleaners and porters were being excluded from a Home Office scheme granting families of health workers indefinite leave to remain in the UK if they die of Covid-19, the Government announced an extension of the scheme on 20 May.

A day later, on 21 May, the prime minister stood by the fee that overseas health workers were being charged to use the NHS.

However, just hours later, following mounting pressure from senior Tories, it was announced that foreign health and care workers would be exempted from the scheme. Starmer called the U-turn a “victory for common decency”.

Perhaps the most significant U-turn of the entire pandemic was the very first when, in early spring, the government dropped mass testing and contact tracing to pursue a so-called ‘herd immunity’ strategy.

As coronavirus tore through communities – and deaths mounted up – that plan was hastily abandoned, and Britain was placed under a strict lockdown for the first of what would turn out to be many times.