Scotland’s Health Secretary recently accused Foreign Secretary Dominic Raab of “having pina coladas by the pool” instead of making a call to help interpreters stranded in Afghanistan. 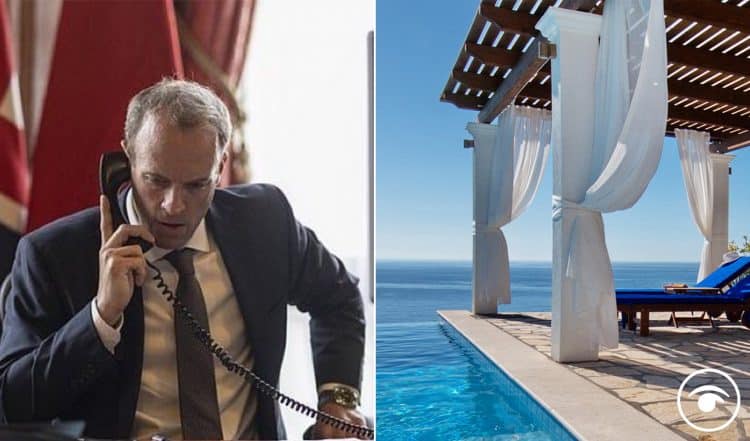 Parliament should be recalled for a special Saturday sitting to assess the final days of the Afghanistan evacuation effort, a former Commons deputy speaker has urged.

It comes after Scotland’s Health Secretary has accused Foreign Secretary Dominic Raab of “having pina coladas by the pool” instead of making a call to help interpreters stranded in Afghanistan.

Speaking at a rally in Glasgow over the weekend, Scotland’s Health Secretary Humza Yousaf took aim at Mr Raab and the UK Government.

“Not one single syllable of regret by any UK Government.

“Not one single ounce of compassion from the UK Government even now at the most desperate time of need for our Afghan brothers and sisters.

“Shame on each and every one of those political leaders who have abandoned the Afghan people.”

He added: “All the while we have a Foreign Secretary who is more occupied with having pina coladas by the pool as opposed to picking up the phone to help Afghan interpreters who helped our soldiers there in Afghanistan.

“Shame on each and every one of them.”

Now House of Lords leader Baroness Evans of Bowes Park has been lobbied by a Conservative colleague who wants the Government to interrupt Parliament’s summer recess for a second time.

Lord Naseby, who served as an MP for 23 years, warned he believes the Taliban will not cooperate beyond August 31 to allow people to flee the country.

MPs and peers must therefore be given the chance to raise issues and understand how the final two days will pan out during a Saturday sitting on August 28, he added.

The Taliban has warned any attempt to continue the evacuation operation past August 31 would “provoke a reaction”.

The UK expects its involvement in the Kabul effort will end when the US leaves Afghanistan, with Prime Minister Boris Johnson on Tuesday preparing to press US President Joe Biden to delay the withdrawal of his forces.

Lord Naseby told the PA news agency: “It’s behove of any government in a situation as dire as this is to recall Parliament for a second time on Saturday of this week, which is very near August 31, so we can have a complete update.

“I was an MP and each of those MPs have got a responsibility to their communities, and many of them may have Afghans or relations in their community.

“Zoom is all very well but we have a responsibility to allow Parliament to have its voice.

“Then the Government can go away for the last two days and decide how they react to it.”

He said he believes the Taliban “won’t move off the August 31” deadline, adding: “We’ve got to face reality. It’s a wake-up call.

“It’s not a party political issue at all.”

On the timing of his proposed recall, Lord Naseby said: “If we’re taking out 1,000 people a day, we ought to know where we are by Saturday.”

Asked how he thinks the Government will respond to his proposal, Lord Naseby laughed as he replied: “I’m not in the guessing game.”

The House of Commons and House of Lords were recalled on August 18 to discuss the Afghanistan crisis, with criticism aimed at Mr Biden, Mr Johnson and Foreign Secretary Dominic Raab over their handling of events.

The decision on whether to ask the Commons Speaker to recall Parliament is for the Government – not individual members.