A large proportion of Brits are also unaware of any problems between the UK and the EU after Brexit. 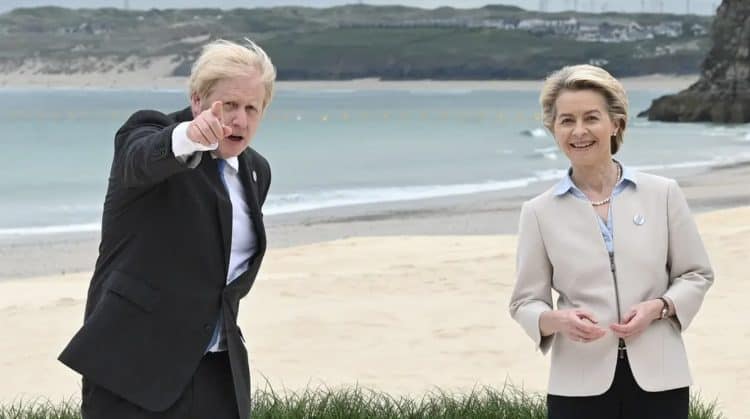 Less than a third of British voters think Boris Johnson’s government is to blame for post-Brexit trade issues, a new poll has revealed.

Most voters, accounting for 45 per cent of respondents, think the EU is guilty for the problems in implementing the Northern Ireland protocol.

By comparison, only 31 per cent think it’s UK’s fault, a Redfield and Wilton Strategies poll has found for Politico.

Meanwhile, the poll has also revealed a big part of Brits do not know of any post-Brexit problems between the UK and the EU – with one in four voters completely unaware of Northern Ireland protocol issues, and most others lacking full awareness of the problems.

The problems under discussion are related to checks on goods sent from the UK to Northern Ireland.

The EU has paused legal action against UK’s alleged breaches of the deal agreed last year. The move was hailed for allowing solutions to be found by Northern Ireland’s first minister Paul Givan.

But the government rejected the EU’s proposals to reduce checks because it would mean following EU standards.

Earlier this year, EU officials hinted that the UK government may not have intended to keep its promises as part of the deal, in a meeting attended by The London Economic.

Austrian MEP Andreas Schieder, rapporteur for the Committee on Foreign Affairs, said: “Only a partnership in which both sides stick to their commitments has a future”.

During the meeting, the European Parliament condemned the UK’s “unilateral actions that are in breach of the Withdrawal Agreement”.

MEPs called on the UK government to “act in good faith and fully implement the terms of the agreements which it has signed’, including the Protocol on Ireland and Northern Ireland.

They also said the European Parliament would be closely monitoring how the agreement is applied, to ensure its views will be taken into account.

Christophe Hansen, rapporteur for the Committee on International Trade, said: “Ratification of the agreement is not a vote of blind confidence in the UK government’s intention to implement our agreements in good faith.

During another meeting attended by TLE in April, Barry Andrews, the Irish MEP for Dublin said: “I am afraid the current brand of English Conservatives that is leading the British government has an unfortunate history with regards to international agreements.”