'Global Britain' could increase emissions by the equivalent of 44,000 transatlantic flights, research found. 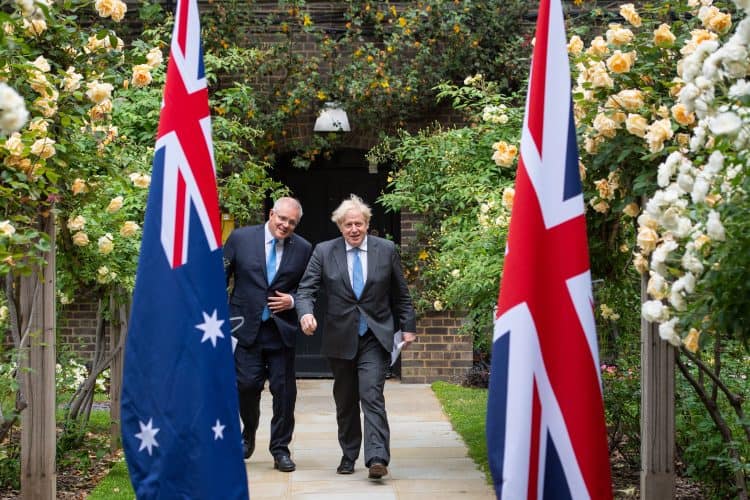 Britain’s post-Brexit shift in trade away from the UK towards places like Australia and the US could double the country’s greenhouse gas emissions from shipping, according to new analysis released on the eve of COP26.

Just days before the crucial climate change summit, Friends of the Earth said the findings represented further proof that the government was “missing the mark on all counts” over the environmental impact of its trade policies.

Boris Johnson’s “Global Britain” approach to trade deals has seen the UK forge deals with far-flung places like New Zealand and Japan – while he is also seeking to join the CPTPPP bloc of Pacific nations.

Analysis by the UK Trade and Business Commission found that replacing lost EU trade since 2018 with imports and exports from further afield would increase annual emissions from UK-linked shipping by 88 per cent.

An additional 6.5 million tonnes of carbon dioxide will be released into the atmosphere each year by container ships making long trips around the world with goods for the UK market and exports – the equivalent of 44,000 transatlantic flights, the Commission found.

To offset the emissions, a new forest the size of Northern Ireland would need to be planted.

Green Party MP and member of the Commission Caroline Lucas said: “This would be a staggering increase in emissions – and one entirely driven by this government’s ideological opposition to the European single market.

“Time is running out in the race for our future, yet the government is taking us further down the track towards climate chaos, rather than comprehensively decarbonising our economy in line with climate science and demonstrating authoritative global leadership in advance of the UN climate summit in Glasgow next week.”

And, speaking to The Independent, Friends of the Earth trade expert Kierra Box said: “A map of the globe isn’t needed to note that chasing trade deals with countries as distant as Australia will increase climate costs of transporting goods all the way back here.

“But it’s not just transport emissions. With crunch climate talks starting in a matter of hours, the government should be adamant that UK imports aren’t responsible for destroying forests, polluting waterways or perpetuating the burning of more fossil fuels overseas. It’s not just about distance, it is also standards, and climate ambition. And the government has missed the mark here on all counts.

“A real commitment to the aims of climate talks would have seen the UK prioritise support for sustainable farming here, invest in relationships with nations sharing similar high standards to the UK, and prioritise trade talks with nations that meet or exceed their commitments under the Paris Agreement – rather than those trailing the pack by a very long way.”

Labour MP Hilary Benn, the Commission chair, added: “This projection from the UK’s fiscal watchdog chimes exactly with what we’ve been hearing from industry experts and business leaders for the last six months. The government’s wilful obsession with making trade with the EU more difficult will leave us poorer and we will be picking up the pieces for many years to come.

“As with any recovery process, the first step is admitting that you have a problem. Ministers must stop using the pandemic as an excuse, acknowledge these findings, and work with business to improve their bad deal.”

Naomi Smith of Best for Britain added: “The government needs to come clean and admit that the two possible outcomes from their current strategy involve either massively increasing our carbon footprint or failing to replace the trade they lost, meaning less business, fewer jobs and lower incomes across the UK.

“If they can move past dogma, the way forward is clear. We need to rebuild trade with Europe by improving the government’s dud deal and the UK Trade and Business Commission has made 64 proposals on how to do just that.”

Related: Boris calls Poland to moan about the European Court of Justice