Both the UK and Poland are in long-running disputes with Brussels over the role and reach of the ECJ. 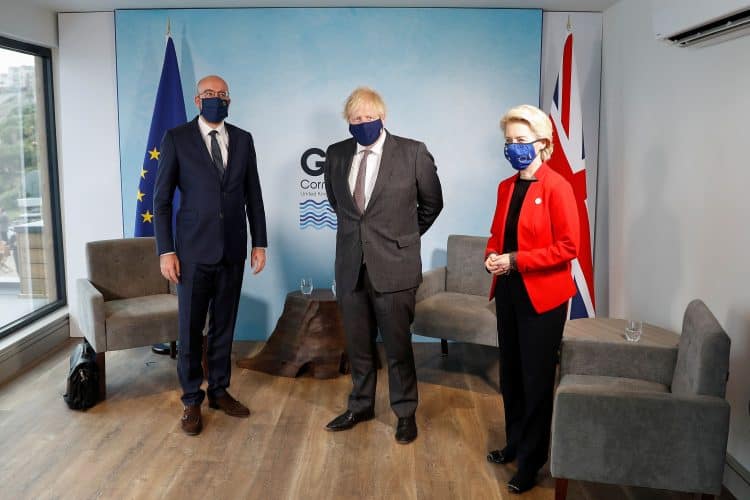 Boris Johnson has spoken to Poland’s prime minister to share frustrations about the European Court of Justice as both countries continue to rattle sabres with Brussels.

Poland was recently told by Europe’s top court to pay a fine of €1 million a day for ingoing an order to suspend part of a contentious series of judicial reforms.

Warsaw’s controversial regime for disciplining judges is part of a long-running battle between Brussels and Poland over reforms to the country’s judicial system, which the EU says threatens the rule of law.

The ECJ ordered Poland in July to suspend several key aspects of its disciplinary regime – relating to the lifting of judges’ immunity of prosecution and their ability to scrutinise the independence of other judges.

Johnson – harbouring his own gripes with the ECJ’s role in overseeing the Northern Ireland Protocol – spoke to his Polish counterpart Mateusz Morawiecki about the issue on Friday, Downing Street said.

“He outlined the need to make urgent progress on this issue in order to protect the Belfast (Good Friday) Agreement.

Critics said the phone call was “silly”, and a “deliberate effort to undermine the EU’s rule of law”.

The European Court of Justice imposed the million euro penalty after a week-long war of words in which Poland told the EU to stay out of its judicial affairs while other EU nations insisted that Warsaw could not continue to get huge EU subsidies while disregarding the bloc’s democratic principles at will.

“You cannot pocket all the money but refuse the values,” Belgian Prime Minister Alexander De Croo said on Wednesday, warning Poland not to treat the EU like “a cash machine”.

The Court of Justice said the daily fine was “necessary in order to avoid serious and irreparable harm to the legal order of the European Union and to the values on which that Union is founded, in particular that of the rule of law”.

The EU’s executive commission had requested the penalty until the Polish government acts to improve the functioning of the Polish Supreme Court and suspends new laws deemed to undermine judicial independence.

Polish minister Michal Wojcik hinted that Poland may not respect the European court’s decision once again, arguing that it is not a proper ruling and has “no legal basis” because the court allegedly acted outside its jurisdiction.

Radoslaw Fogiel, a spokesman for Poland’s nationalist ruling party, brushed the penalties off, saying Poland’s contribution into the EU coffers is much larger than that.

Overall, however, EU figures show that Poland is a net recipient of 12 billion euros a year from the bloc.

The point of contention is the Disciplinary Chamber of the Supreme Court, a body that the ruling party empowered to discipline judges. Many Polish judges view the chamber as a tool to pressure judges to rule in favour of the governing authorities.

In July, the European Court of Justice ordered the suspension of the disciplinary chamber, but it is still operating.

Morawiecki told the European Parliament last week that the chamber will be abolished, but he gave no precise time for when that would take place – and Wojcik said the proper legislation will come in “due time”.

The decision also comes on the heels of an EU summit, where Polish arguments that its fundamental judicial changes would not undermine the EU failed to convince key bloc leaders.

Poland’s nationalist ruling party, Law and Justice, has been in conflict with Brussels since winning power in 2015 over a number of matters, including migration and LGBT rights.

The longest running dispute, however, has centred on the Polish government’s attempts to take political control of the judiciary.

The matter came to a head earlier this month when Poland’s constitutional court ruled that some key parts of EU law are not compatible with the nation’s Constitution.

The court stacked with ruling party loyalists gave its opinion after Morawiecki asked it to decide on whether EU or national law has primacy.

The fine imposed on Wednesday comes on top of a 500,000 euro daily fine that the Court of Justice ordered Poland last month to pay for having ignored its injunction to close the Turow brown coal mine. The ruling came in a dispute between Poland and the Czech Republic.

Poland argues it cannot do without the 7% of its energy that the Turow power plant is generating. Mr Morawiecki has indicated Poland is prepared to pay, and can afford it.

Due to the disputes, there is a possibility that Poland will not be getting 36 billion euros in EU funds earmarked for recovery from the pandemic as long as it does not change its ways.