Johnson hopes the 'Levelling Up' white paper and a Brexit Freedoms Bill will distract from Sue Gray. 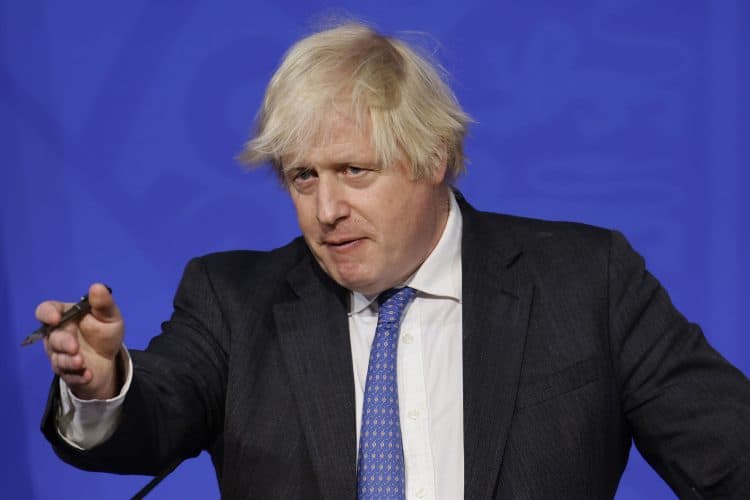 Boris Johnson has set out plans to capitalise on Brexit and is expected to move forward with the levelling up agenda this week as he awaits the findings of the highly anticipated “Partygate” report.

Two years to the day since the UK left the EU, the Government has launched a new “Brexit Freedoms” Bill as part of a drive it claims will “cut £1 billion of red tape” for businesses.

The long awaited Levelling Up White Paper is also expected to be published this week – although a policy trailed over the weekend was heavily criticised by the opposition.

The announcements will be seen as an attempt by Johnson to steer the narrative away from toxic “partygate” allegations that have dominated the news agenda in recent weeks.

‘Failed as a collective’

But Downing Street was in hot water again overnight on Sunday as a senior official who worked in No 10 during the pandemic lashed out at the Government over the scandal.

Writing in The Times, Nikki da Costa, who was formerly Johnson’s director of legislative affairs, claimed that No 10 seemed to have “failed as a collective” to “live by the spirit and the letter of the rules” it was setting.

Questions have been looming over the future of the PM’s premiership as he awaits the findings of Whitehall and police inquiries into claims of lockdown-busting gatherings held in Downing Street.

No 10 had still not received a copy of the highly anticipated Sue Gray report on Sunday evening.

The PA news agency understands that is it due to be delivered in a matter of days.

It was also reported on Sunday that the Government is expected to announce a U-turn on mandatory Covid vaccinations for NHS and social care staff.

Health Secretary Sajid Javid has been facing pressure to scrap the requirement for health workers in England to be vaccinated by April amid fears it will lead to a major staffing crisis.

Trade minister Penny Mordaunt tweeted in response to the reports in The Telegraph: “This looks promising… Hope a sensible way through can be found for both health and social care.”

And Conservative former minister Steve Baker said: “What a relief. The right decision.”

In a taster of the policies to come in its Levelling Up White Paper, the Government announced new plans at the weekend to “breathe fresh life into disadvantaged communities” across England.

The Department for Levelling Up, Housing and Communities (DLUHC) said 20 chosen locations will be prioritised for a £1.5 billion Brownfield Fund made available from April 2022.

But pressed on where the money was coming from, the DLUHC clarified to the PA news agency that the cash to fund the work was allocated by the Treasury last year.

Meanwhile, tensions remain high between Russia and Ukraine, with Johnson expected to speak to President Vladimir Putin and travel to the troubled region early this week.

It emerged at the weekend that Johnson is looking at doubling the number of troops deployed to strengthen Europe’s borders.

No 10 said it could send defensive weapons to Estonia while fast jets, warships and military specialists may be sent to protect Nato allies.

But the Foreign Secretary said on Sunday that a situation in which British soldiers would fight alongside Ukrainians against Russia was “very unlikely”.

The Brexit Freedoms Bill announced on Monday will affect the handling of retained EU law – Brussels-made regulations which were preserved in the UK statute book for legal continuity after the transition period ended in 2020.

The Government has previously made clear that it intends to eventually amend, replace or repeal all of the retained law that it deems “not right for the UK”.

But Downing Street said that under current rules, changing or scrapping regulations in the pipeline of outdated legislation would take “several years” because of a long-winded alteration process.

It said the new Bill will “ensure that changes can be made more easily”, so the UK can “capitalise on Brexit freedoms more quickly”.

No 10 did not specify exactly what provisions the Bill will contain to speed up reforms, or how it calculated that businesses would save £1 billion through the cutting of red tape.