Judi James said the prime minister in waiting’s charm was "drained" and he showed he can be "just as robotic as Liz Truss, if not more". 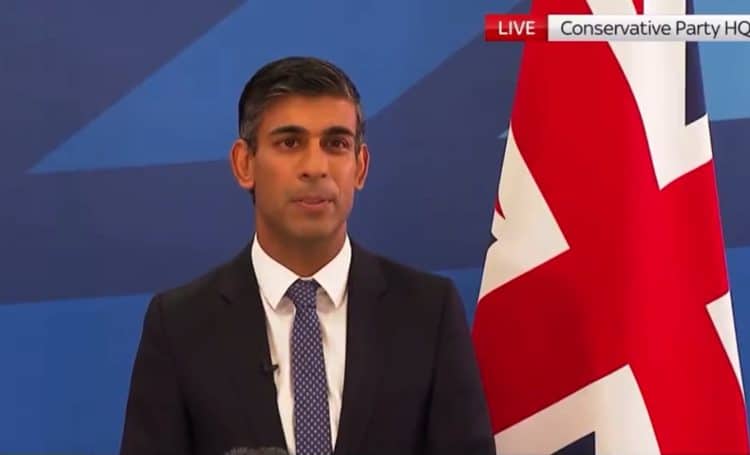 A body language expert has claimed Rishi Sunak appeared to show ‘fear’ during his first speech as Tory leader.

The Richmond MP was widely lampooned after giving a hastily put-together address on Monday, with several people pointing out that he had adopted a similar style to his predecessor, Liz Truss, who has frequently been cited for her curious delivery.

Speaking to the Metro after Sunak was handed the reins, Judi James said the prime minister in waiting’s charm was “drained” and he showed he can be “just as robotic as Liz Truss, if not more”.

“His arms pumped against his ribs in a micro-gesture of emphatic authority, but apart from that, he was light on any expressions or gesticulations.

“His eye expression at the start looked questioning and then his eyes rounded in what looked like fear rather than calm control and authority.

“I would guess we will see a different Rishi speak from outside No. 10 tomorrow but this was not the high-impact start he might have needed.”

Judi also pointed out an “odd seven-second silent pause at the start” followed by a “six-second silent, expressionless pause” at the end of the address.

Suggesting Sunak could have thought the broadcast was recorded rather than live, she said: “When you record a message for the media you will often pause like that at the end rather than dashing off, but surely Rishi would not have made such an error this early into his new role?’

She added: “Rishi’s first formal address needed to be reassuring and calming. He should have shown himself as the adult in the room. But instead, he showed he was capable of being every bit as robotic and Truss, maybe more.”