In claiming not to know the ‘broader history” of taking a knee Raab dismisses the fight against racism and takes a side. The wrong one obviously. For a Tory party so insistent that history not be erased they are remarkably adept at it. 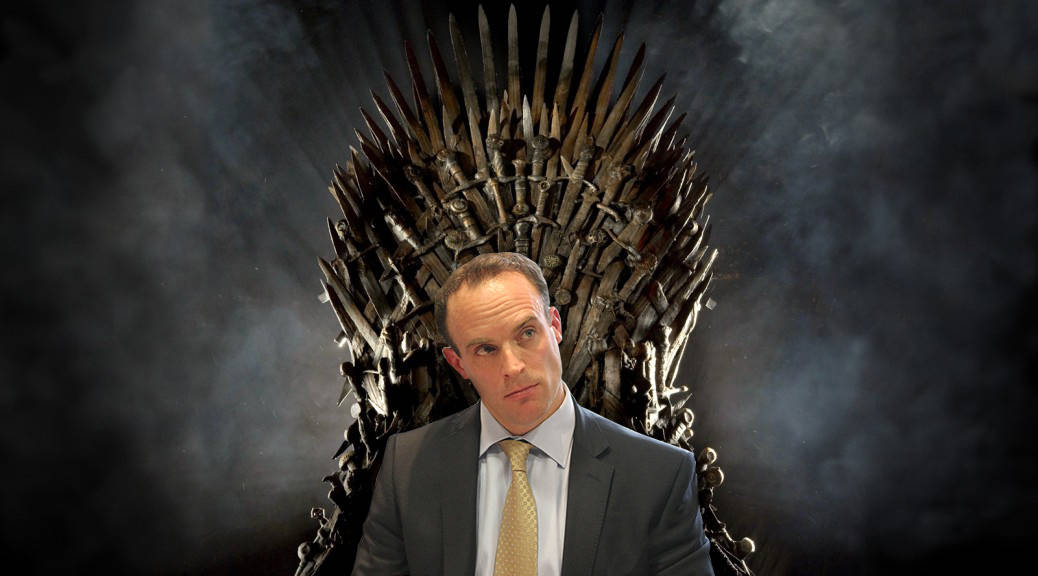 I wish the Coronavirus was done. I wish for a time when we can gather together. I wish it was the Olympics again. I wish for that moment when thousands of us could come together in a pure demonstration of national unity and expression and boo Dominic Raab. Imagine that boo, oh what a boo it would be, it would be even better than the George Osborne boo. And man that was a really good boo. Raab’s boo would be a big fulsome spontaneous boo of contempt and admonishment. A huge echoing BOOOOOOOOOOOOO! The kind of boo that says,“You’re complete wanker but the family are here.” A proper British boo.

In a year full of “hold my beer” moments Dominic Raab showed remarkable solidarity with Matt Hancock, who had misnamed Marcus Rashford, by saying, “On this taking the knee thing, I don’t know maybe it’s got a broader history but it seems to be taken from the Game of Thrones.”

Yes, Dominic, that’s completely right. All black history, struggle and defiance comes from Game of Thrones. Who can forget Martin Luther King’s famous speech, “I have a dream where a child will not be judged on the colour of their skin but on their skill with a sword! Charge!”

Who can forget Angela Davis laying siege with dragons while Huey P Newton sits on the wicker Throne of Knives and Malcolm X proclaims, “Winter is coming home to roost!”

He goes on, of course he does as much like his boss he is incapable of pulling out once he has got going, “It feels to me like a symbol of subjugation and subordination.” In his world ‘taking a knee’ in solidarity with the fight against racism is subjugation. Essentially he is proclaiming “I won’t kneel for them,” it is the Oxbridge equivalent of “there ain’t no black in the union jack.” It is a bit of red meat thrown to the combined ranks  of monument pissers, Talk Radioers and Hard Brexiteers that make up the rump of Johnson’s statue nonce Tories.

In claiming not to know the ‘broader history” of taking a knee Raab dismisses the fight against racism and takes a side. The wrong one obviously. For a Tory party so insistent that history not be erased they are remarkably adept at it.

It seems almost churlish to note the other moment in Raab’s interview when he said, “I only kneel to two people the Queen and the missus,”  It just sounded odd. Sexual almost. He looked clammy with a weird intense Borat* vibe. Touching his trousers and staring into the camera. This is our foreign secretary. A race baiter, an ignoramus and a badly dressed pervert.

When Johnson admits to spending £900,000 to paint his plane red, white and blue because it will help improve our image abroad it doesn’t justify it but amidst the vanity he is sort of right. The paint job can not actually do any more damage to our image. Frankly our international standing is so low they could get rid of the plane steps and shot Johnson to the tarmac on a zip wire waving the union jack in each paw and it would matter not a jot.

However, when Johnson spends £900,000 on paint, an eye watering amount that not even Farrow and Ball could dream off, he loses. When Johnson U turns on food poverty, he loses. When he U turns on migrant NHS staff paying £400 surcharge to use the NHS, he loses. The economy tanking and set to tank more, he loses. Coronavirus and round two on the horizon, loses. Which is why I can almost see Boris Johnson in a cabinet meeting screaming, “Culture war!” In the same way that John Belushi shouts “Food fight!” in Animal House. It is the only war he can win.

Shutting down the Department for International Development has long been a battle cry of the far right that now occupies the centre ground of the Tory Party. Before she went on to become Secretary of State for DfID Priti Patel called for it to be shut down. It was a remarkable piece of foresight on her part demanding she should be sacked before she took the job. And sacked she duly was. However, why shut down DfID now? Why hand control of the aid budget to Raab and link it to the UK’s interests? Why link aid with trade when so much time was spent separating the two after the scandals in the 90’s?

More red meat. Bait for the Boris bass. For those who see black people as  “piccanninies” with “water melon smiles” and who say, “Why should we give them any money?  We sorted Africa with Red Nose Day. We should spend our money on our people.” Actually we should do both but Johnson will do neither. All he has is red meat and a culture war.

*This description is from Charlie Thomas, my son. The only way I could use that line was if I quoted him. Gone are the days when I can steal my children’s comments and pass them off as my own.