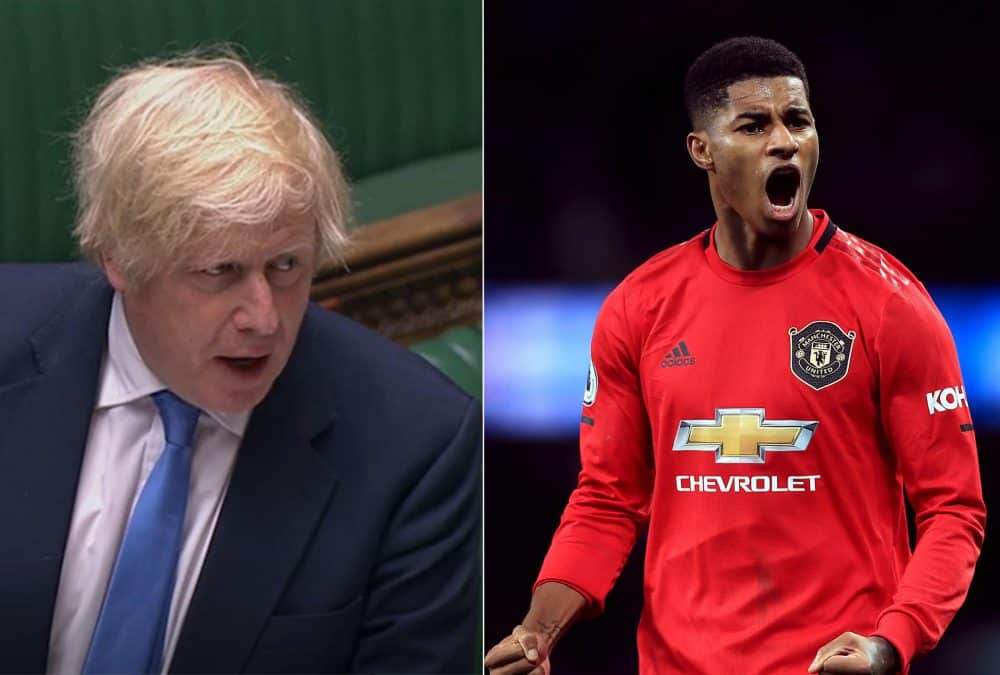 Football is back tonight and 22-year-old Marcus Rashford has done more for the people of the UK in the past couple of days than the Government has managed in over a decade.

During today’s PMQs they offered little more, with the Prime Minister caught offside on numerous occasions.

Matt Hancock must have been cringing in his seat today after earlier naming the striker Daniel Rashford when praising him (later claiming he got mixed up with Harry Potter, this is football not Quidditch, Matt) when a few weeks ago he went after greedy footballers to deflect from the Government’s ineptitude at dealing with the pandemic. However, the public knew we couldn’t blame Harry McGuire for a hospital in Nuneaton not having enough PPE.

What struck me is the PM never praised Marcus Rashford during today’s PMQs. Perhaps because the free school meals over the summer climb down was another U-turn to the left wing, which, again, looks like an own goal. Why not just vote Labour instead, and during the session Starmer told Johnson that he was happy to get off the subs bench to replace him.

Today the PM made it into opposition questions. Instead of answering questions he demanded to know if the Labour leader would re-open schools or was he just saving the (goalkeeper) unions.

Never mind neat technical skills imported from abroad, just lump it back into the opposition’s box – it doesn’t matter if you score just keep the ball away from your own goal.

Some claret-faced Tory MPs who have never wanted foreign influence in the game praised the PM for his very English style. Attack is the best form of defence.

Without the packed arena, football and Parliament isn’t the same, it feels flat. The right-wing drunken mob shouting abuse at the other side will be back soon enough though, but not at football stadiums they cleaned up their act years ago.

Starmer quoted a senior Tory councillor who said local authorities need more than £3.2 billion to ensure they can still deliver services. But the PM didn’t even listen to his own team, there would be no more transfer money to strengthen the side.

The Labour leader wanted to know about child poverty and he quoted the Social Mobility Commission report that 600,000 more children are in relative poverty from 2012 to now, and predicts it could rise to over 5 million by 2020. His statistics were flatly denied by the PM.

However, Johnson’s claims went to VAR, after the match, and it appears after some quick internet-based research his figures were wrong. After video questions being introduced in the chamber this was just another example of technology ruining the beautiful game.

So what was it like in the MPs houses this week…

Andrea Marie Jenkyns (Con) looked like she was actually in a florists at the till, taking MP’s second jobs to a new level.

Ian Blackford (SNP) remained in his Celtic cave until his football team wins the league or Scotland gets it’s freedom, something the PM will not accept. Blackford better hope Hibernian get a rich oil baron to take them over, but maybe not the British Government.