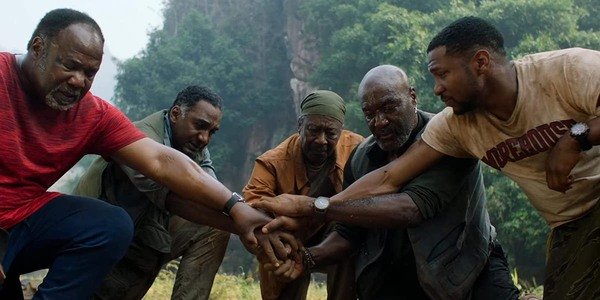 The latest Spike Lee joint, Da 5 Bloods, is an anguished scream of a film that wrestles with American history and its modern day effects. Boasting an all-star cast including Delroy Lindo, Clarke Peters and Chadwick Boseman, the film follows a group of four Vietnam vets who return to where they fought “the American war”. Formally, they are there to locate and recover the remains of their deceased squad leader “Stormin’ Norman” (Boseman), who they call “our Malcolm [X] and our Martin [Luther King]”, yet they’re also on the trail of gold – a treasure trove of bullion that they found and buried all those years ago. The flashback footage of the Vietnam war is suitably presented in 16mm with none of the characters being de-aged and Boseman remaining forever young – as he does in the remaining Bloods’ memories and hearts.

Over the course of his career, Lee has worked within a myriad of genres (the biopic, the musical, the action-thriller, the cop movie and so on) and the skill with which he has been able to stitch together narratives, use popular culture and elevate these genres to new heights has been exceptional. Here he’s grappling with (primarily) the combat picture, an area he has tread before with his WW2 film, Miracle at St Anna. Lee has often criticised Hollywood and the way it treats black lives through his films and Da 5 Bloods is no exception.

At one point Otis, played superbly by Clarke Peters, points out after one of the group says he’s a Rambo fan, that films such as Rambo were Hollywoods way of “winning the war” post-Vietnam. White action stars became the heroes when Black soldiers made up 16.3% of those drafted and 23% of Vietnam combat troops, despite accounting for only roughly 11% of the civilian population. Black soldiers were being asked to fight and die for a country that back home treated them as second class citizens, something North Vietnam propagandists such as Hanoi Hanna (played here by Veronica Ngo) were quick to point out.

We pick up the action as the Bloods reunite in Ho Chi Minh City, formerly Saigon. The stand out performance in the film is from Delroy Lindo who plays, Paul, a MAGA cap wearing Trump supporter wrestling with PTSD that has seeped into all areas of his life. There is a moment when the vets are drinking in an ‘Apocalypse Now’ themed bar where Paul makes the statements of “I’m tired of not getting mine, man”, and insisting that it’s “time we got these freeloading immigrants off our backs and build that wall!” Otis fawningly mocks his statement as Lee smash cuts to a Trump rally in 2016 where “Blacks for Trump” banners are being held aloft, in a delicious slice of razor sharp humour.

What to do with the bullion is a line of contention with the veterans and they aren’t the only interested party. Tien (Le Y Lan), Otis’s former lover, is part of the plan, in association with a slimy Frenchman in a white linen suit (Jean Reno). Paul’s partly estranged son, David (Jonathan Majors), joins the expedition, and the group crosses paths with a trio of international NGO workers (Mélanie Thierry, Paul Walter Hauser and Jasper Paakkonen). There’s also Vinh (Johnny Tri Nguyen), the group’s Vietnamese guide who, at one point, reminds the visiting Americans that wars never really end.

The truth of this observation is borne out in various ways, some of which are bluntly literal. Lee, who developed the film with his regular collaborator Kevin Willmott from an original script by Danny Bilson and Paul De Meo does not explore this observation as far as he could and this leads the film to be lacking in nuance. Ultimately this is still a US movie about a group of US veterans even if the normal focus of this group has been shifted.

Da 5 Bloods, for the most part, splits the narrative strands down the middle and manages to hold it together but the film spools off in lots of different directions; it’s a western, an all-out action film, an ensemble buddy comedy, a melodrama between father and son and it’s a middle finger of chaotic provocation. Lee doesn’t offer an answer as he rarely does, he brings all the information he can to the fore and lets the audience figure out for itself what it all means. Unlike in his previous film, Blackkklansman, this leaves the film hanging on a rather unsatisfying note.

Coming back to Lindo’s performance is crucial in understanding the film’s greatest strength. Lindo plays Paul not as a pastiche but as incredibly, fallibly human. It is a towering achievement. Paul isn’t a haunted character rather he is the colossal, terrifying heart of the film. He carries rage, guilt, helplessness and self-pity with him in every scene and his MAGA hat almost becomes a character in its own right. When the film moves away from Paul, it falters slightly, becomes less harmonious and loses sight of what makes it tick.

Da 5 Bloods has flashes of what makes a Spike Lee film great. This is a long, fatigued, violent, funny and deeply moving film that wrestles with both America and American cinema. It is a film having an argument with itself and at times can feel incoherent but in the closing moments the film’s crushing weight comes down and the emotional pay off is suitably deserved.