Tongan Princess Mele Siu’ilikutapu Kalaniuvalu Fotofili said:“We are grateful to your government for making the right decision to apologise. To right the extreme, inhumane, racist and unjust treatment, specifically against my community, in the Dawn Raids era.” 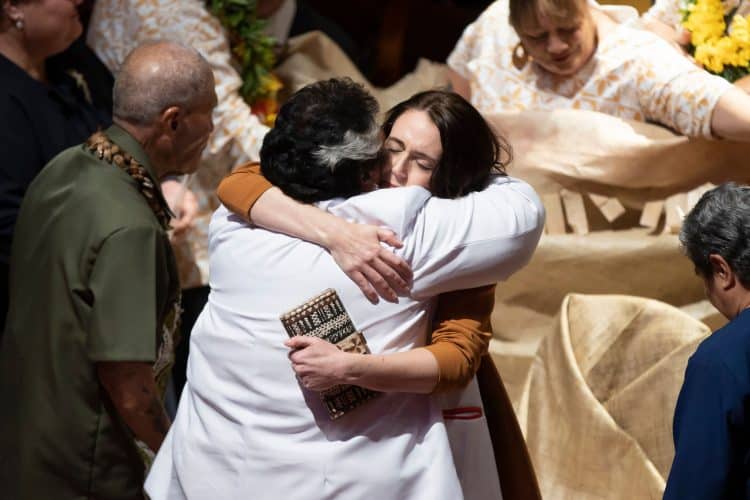 New Zealand’s Prime Minister has formally apologised for a racially charged part of the nation’s history, known as the Dawn Raids.

The events saw Pacific Island people targeted for deportation in the mid-1970s during aggressive home raids by authorities to find, convict and deport overstayers. The raids often took place very early in the morning or late at night.

As part of an emotional ceremony at Auckland Town Hall, PM Jacinda Ardern was covered in a large white mat and then embraced. The apology did not come with any broader financial compensation or legal changes, but many Pacific people say it represented an important first step.

By being covered in the mat, Ms Ardern was taking part in a traditional Samoan ritual known as an ifoga, in which the subject seeks forgiveness by exposing themselves to a kind of public humiliation.

Ms Ardern told a tearful crowd of several hundred that the government was offering a formal and unreserved apology.

“The government expresses its sorrow, remorse, and regret that the Dawn Raids and random police checks occurred and that these actions were ever considered appropriate,” she said.

At the time of the raids, many Pacific people had come to New Zealand on temporary visas to help fill a need for workers in the nation’s factories and fields. But the government appeared to turn on the community by deciding those workers were no longer needed.

People who did not look like white New Zealanders were told they should carry identification to prove they were not overstayers, and were often randomly stopped in the street, or even at schools or churches. Even though many overstayers at the time were British or American, only Pacific people were targeted for deportation.

Ms Ardern said that while the raids took place almost 50 years ago, their legacy continued.

“It remains vividly etched in the memory of those who were directly impacted. It lives on in the disruption of trust and faith in authorities. And it lives on in the unresolved grievances of Pacific communities that these events happened and that to this day they have gone unaddressed,” she said.

Ms Ardern said that as a gesture of goodwill, the government would fund new education and training scholarships for Pacific communities and would help compile an official account of the raids from written records and oral history.

“As part of this, the community will have the opportunity to come forward and share their experiences,” Ms Ardern said.

Tongan Princess Mele Siu’ilikutapu Kalaniuvalu Fotofili said the impact of the Dawn Raids had haunted her community for generations.

“We are grateful to your government for making the right decision to apologise,” she said to Ms Ardern. “To right the extreme, inhumane, racist and unjust treatment, specifically against my community, in the Dawn Raids era.”

The princess said that while some members of her Tongan community might have been on the wrong side of the law at the time, it did not warrant the extreme measures taken against them.

But the princess said the government could do a better job of responding to current immigration needs, a comment which drew sustained applause. She said petitions had been submitted to find pathways and residency for overstayers and visa-holders.

“This is a new dawn for my community and the Pacific community at large,” she said.