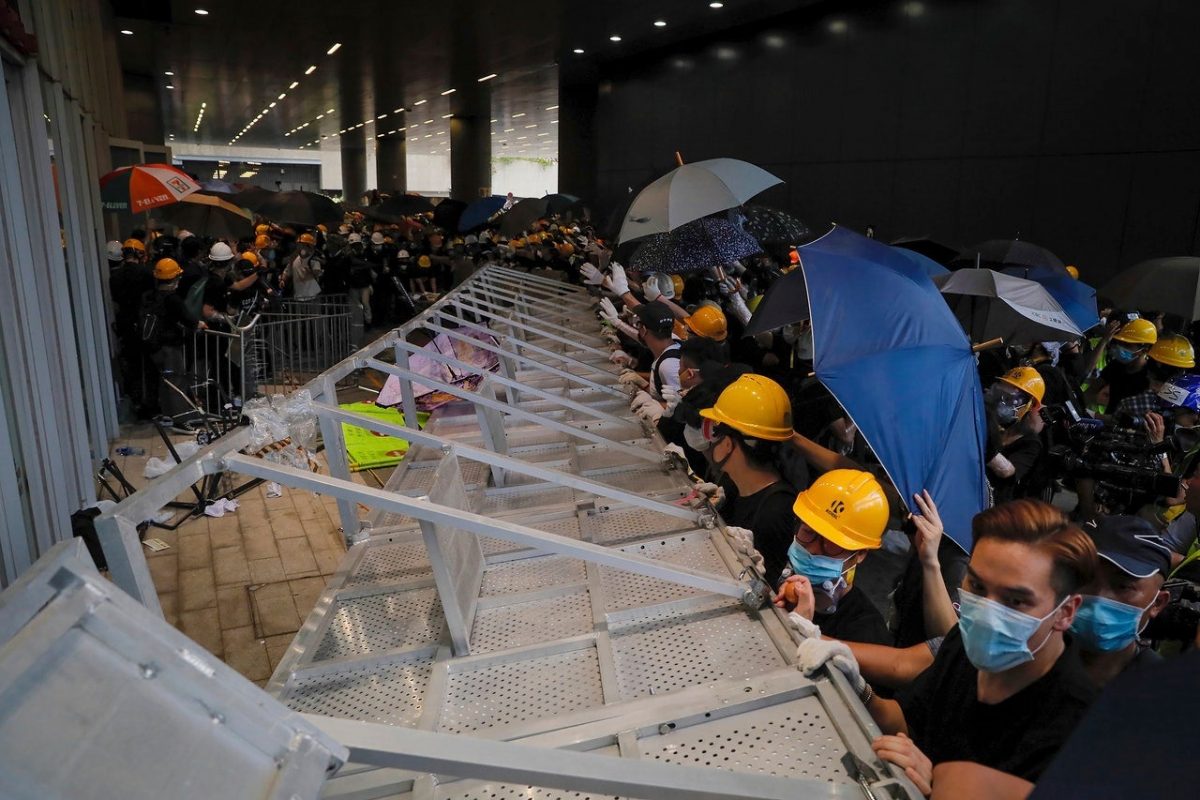 “The violent attacks … are serious illegal acts that trample on the rule of law and endanger social order. We strongly condemn it,” he told reporters.

He reiterated China’s rejection of any foreign nation commenting on or intervening in protests in Hong Kong, saying such matters are a Chinese affair and other countries “must not support any violent criminals in any form, and not send any misleading signals or take any erroneous actions”.

Mr Geng’s comments follow the publication of an editorial by a ruling Chinese Communist Party newspaper that said the demonstrators who broke into the legislature showed their “arrogance” and had no regard for the rule of law.

Chinese state media ran footage of police in Hong Kong clearing protesters from streets in the early hours of Tuesday in a break with their silence over days of pro-democracy demonstrations that have challenged Beijing’s authority over the semi-autonomous Chinese territory.

Beijing has largely sought to downplay the demonstrations that have highlighted doubts about the validity of its “one country, two systems” formula for governing the former British colony.

Its coverage of the protests and the publication of a harsh editorial in the official Communist Party newspaper Global Times may indicate it is prepared to take a tougher line against the demonstrators.

“These violent assailants in their arrogance pay no heed to Hong Kong’s law, no doubt arousing the anger and sadness of all people of the city of Hong Kong,” the editorial said.

Veteran opposition figure Joshua Wong acknowledged the damage to the legislative offices has drawn criticism from some sectors in the Asian financial hub, but he said mass participation in marches and rallies over previous weeks showed a groundswell of support for the demonstrators’ goals of demanding more accountability from chief executive Carrie Lam’s administration.

“I understand people in Hong Kong and around the world might not 100% agree or disagree on all of the behaviour of protesters … but all of the requests have been ignored. So is there any way out?” Mr Wong said.

Ms Lam is “not capable as leader any more” and should resign, he added, echoing the demand of many protesters.

Having been elected by a Beijing-approved committee, Ms Lam is reliant on continuing support from Beijing, which has shown no outward signs of abandoning her so far.

Mr Wong also alleged that police officers had “double standards” in enforcing the law, saying pro-Beijing legislators and their staff members have benefited from better treatment than their opposition counterparts throughout the weeks of protest outside the legislature.

On the mainland, Beijing had sought to suppress news of the protests, which roughly coincided with celebrations of the 22nd anniversary of Hong Kong’s handover from British to Chinese rule.

The demonstrations reflect mounting frustration with Ms Lam and her government for not responding to demands from opposition figures that were originally sparked by a government attempt to change extradition laws to allow suspects to be sent to China for trial.

Ms Lam has shelved the bills but not agreed to scrap them altogether as demanded by opponents.

Hundreds of protesters swarmed into Hong Kong’s legislature on Monday night, defacing portraits of legislators and spray-painting pro-democracy slogans in the chamber before vacating it as riot police cleared surrounding streets with tear gas and then moved inside.