The Doomsday Clock has been set at 100 seconds to midnight—closer than ever before to apocalypse. 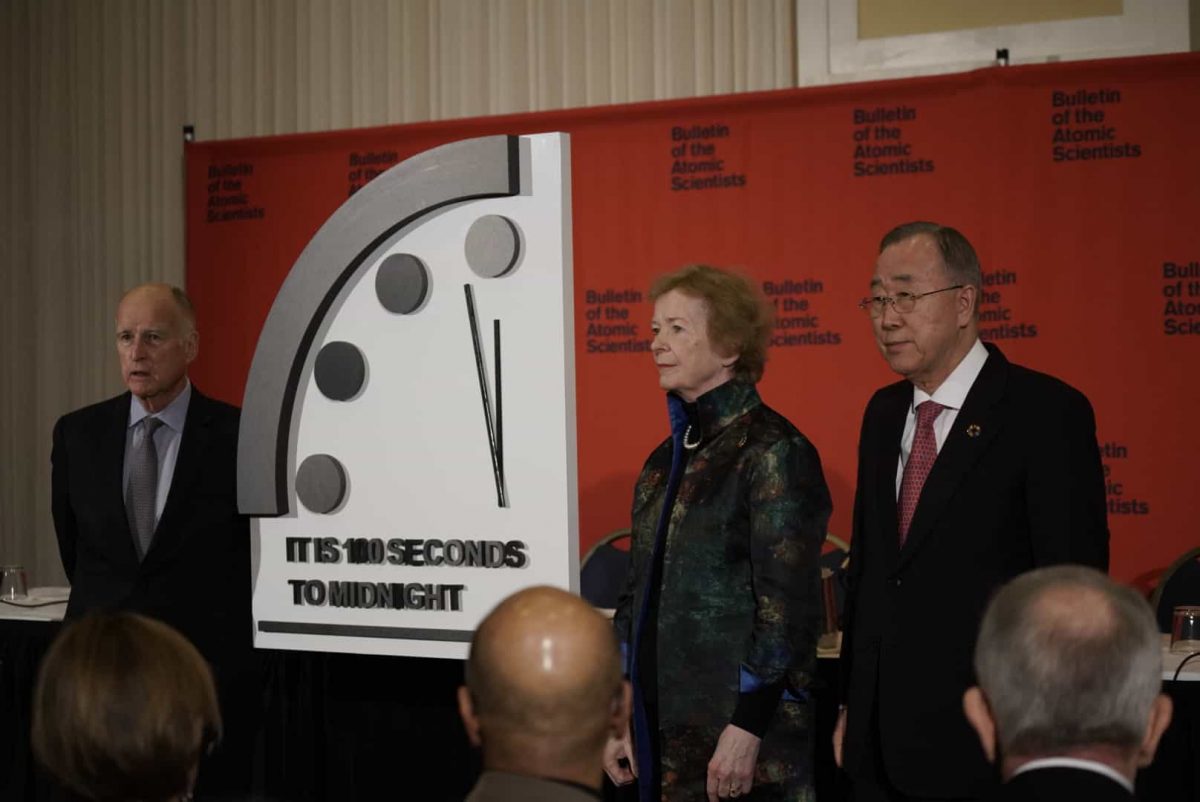 The iconic Doomsday Clock symbolizing the gravest perils facing humankind is now closer to midnight than at any point since its creation in 1947.

The clock, which serves as a metaphor for global apocalypse, was moved forward by 20 seconds.

The announcement from the clock’s keepers means the perceived threat is now more severe than it was last year and in 1953, when it was two minutes away. The Doomsday Clock has now moved closer to midnight in three of the last four years.

A statement issued today by the Bulletin of the Atomic Scientists explains: “Humanity continues to face two simultaneous existential dangers—nuclear war and climate change—that are compounded by a threat multiplier, cyber-enabled information warfare, that undercuts society’s ability to respond. The international security situation is dire, not just because these threats exist, but because world leaders have allowed the international political infrastructure for managing them to erode.”

Rachel Bronson, president and chief executive of the Bulletin of the Atomic Scientists, which sets the reading, said: “The world has entered into the realm of a two-minute warning, a period when danger is high and the margin for error low.”

“We are now expressing how close the world is to catastrophe in seconds – not hours, or even minutes. It is the closest to Doomsday we have ever been in the history of the Doomsday Clock.

“We now face a true emergency – an absolutely unacceptable state of world affairs that has eliminated any margin for error or further delay.”

Former president of Ireland Mary Robinson, chairwoman of The Elders and former UN high commissioner for human rights, described the announcement as a “solemn occasion”.

She said: “We ask world leaders to join us in 2020 as we work to pull humanity back from the brink. The Doomsday Clock now stands at 100 seconds to midnight, the most dangerous situation that humanity has ever faced. Now is the time to come together – to unite and to act.”

A statement from the bulletin said: “Humanity continues to face two simultaneous existential dangers – nuclear war and climate change – that are compounded by a threat multiplier, cyber-enabled information warfare, that undercuts society’s ability to respond.

“The international security situation is dire, not just because these threats exist, but because world leaders have allowed the international political infrastructure for managing them to erode.”

While the clock did not move in 2019, its minute hand was set forward in 2018 by 30 seconds, to two minutes before midnight.

The countdown was established in 1947 by experts from The Bulletin of the Atomic Scientists who were working on the Manhattan Project to design and build the first atomic bomb. The bulletin is an independent non-profit organisation run by some of the world’s most eminent scientists.

It was originally intended to warn of the threat of nuclear armageddon.

But the Doomsday Clock also takes into account the likelihood of other emerging threats such as climate change and advances in biotechnology and artificial intelligence.

Former California Governor Jerry Brown, executive chair, Bulletin of the Atomic Scientists, said: “Dangerous rivalry and hostility among the superpowers increases the likelihood of nuclear blunder. Climate change just compounds the crisis. If there’s ever a time to wake up, it’s now.”

Former UN Secretary-General Ban Ki-moon, deputy chair, The Elders; and former South Korean Foreign Minister, warned: “We share a common concern over the failure of the multilateral system to address the existential threats we face. From the US withdrawal from the Paris Agreement and the Iran Nuclear Deal, to deadlock at nuclear disarmament talks and division at the UN Security Council – our mechanisms for collaboration are being undermined when we need them most.”

Why has the Doomsday Clock moved closer than ever to midnight?

· Nuclear weapons. “In the nuclear realm, national leaders have ended or undermined several major arms control treaties and negotiations during the last year, creating an environment conducive to a renewed nuclear arms race, to the proliferation of nuclear weapons, and to lowered barriers to nuclear war. Political conflicts regarding nuclear programs in Iran and North Korea remain unresolved and are, if anything, worsening. US-Russia cooperation on arms control and disarmament is all but nonexistent.”

· Climate change. “Public awareness of the climate crisis grew over the course of 2019, largely because of mass protests by young people around the world. Just the same, governmental action on climate change still falls far short of meeting the challenge at hand. At UN climate meetings last year, national delegates made fine speeches but put forward few concrete plans to further limit the carbon dioxide emissions that are disrupting Earth’s climate. This limited political response came during a year when the effects of manmade climate change were manifested by one of the warmest years on record, extensive wildfires, and quicker-than-expected melting of glacial ice.”

· Cyber-based disinformation. “Continued corruption of the information ecosphere on which democracy and public decision making depend has heightened the nuclear and climate threats. In the last year, many governments used cyber-enabled disinformation campaigns to sow distrust in institutions and among nations, undermining domestic and international efforts to foster peace and protect the planet.”

At the same time, the Doomsday Clock statement also identifies possible action steps to turn back the hands of the Clock:

· “US and Russian leaders can return to the negotiating table to: reinstate the INF Treaty or take other action to restrain an unnecessary arms race in medium-range missiles; extend the limits of New START beyond 2021; seek further reductions in nuclear arms; discuss a lowering of the alert status of the nuclear arsenals of both countries; limit nuclear modernization programs that threaten to create a new nuclear arms race; and start talks on cyber warfare, missile defenses, the militarization of space, hypersonic technology, and the elimination of battlefield nuclear weapons.

· “The countries of the world should publicly rededicate themselves to the temperature goal of the Paris climate agreement, which is restricting warming “well below” 2 degrees Celsius higher than the preindustrial level. That goal is consistent with consensus views on climate science, and, notwithstanding the inadequate climate action to date, it may well remain within reach if major changes in the worldwide energy system and land use are undertaken promptly. If that goal is to be attained, industrialized countries will need to curb emissions rapidly, going beyond their initial, inadequate pledges and supporting developing countries so they can leapfrog the entrenched, fossil fuel-intensive patterns previously pursued by industrialized countries.

· “The United States and other signatories of the Iran nuclear deal can work together to restrain nuclear proliferation in the Middle East. Iran is poised to violate key thresholds of the deal.

· “The international community should begin multilateral discussions aimed at establishing norms of behavior, both domestic and international, that discourage and penalize the misuse of science. Science provides the world’s searchlight in times of fog and confusion. Furthermore, focused attention is needed to prevent information technology from undermining public trust in political institutions, in the media, and in the existence of objective reality itself. Cyber-enabled information warfare is a threat to the common good. Deception campaigns—and leaders intent on blurring the line between fact and politically motivated fantasy—are a profound threat to effective democracies, reducing their ability to address nuclear weapons, climate change, and other existential dangers.”