One intoxicated man tried to touch a clearly uncomfortable young woman "while she was literally on a march about women’s safety and consent”. 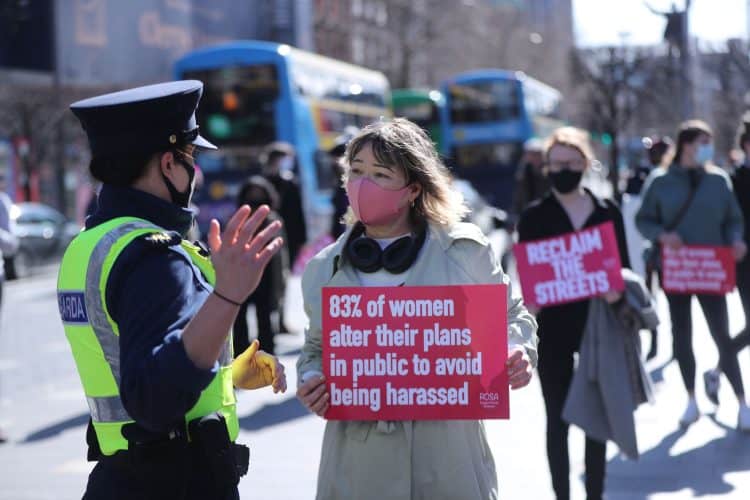 Women were ‘assaulted’ and ‘abused’ by men while marching for their rights and safety during the Reclaim These Streets protest.

Hundreds of people joined in the march to protest violence against women, and to bring awareness to the rising concerns surrounding drink spiking.

But Canterbury Christ Church University Students’ Union has revealed that while there was huge support for the cause on Thursday evening, there were also incidents which “showed why these protests are still needed”.

Female protestors were reportedly assaulted and abused by several men as they took part in the demonstration on the streets of Canterbury.

According to a post on the Union’s Twitter page, one intoxicated man “tried to touch a clearly uncomfortable young woman while she was literally on a march about women’s safety and consent”.

The man then allegedly “asked why there were no stats being read out about violence against men.”

Other people who tried to disrupt the event included “men who yelled and laughed during a two-minute silence for the women who have died as a result of male violence”, and “men who threw toilet paper at a group of people for daring to care about violence against women, whilst a pair of schoolgirls were recounting their experiences of sexual assault”.

It has been reported that a group of men threw an egg at protestors.

The university’s Students’ Union branded the incidents as “a terrible indictment on society, where incidents like these happen on a daily basis to women in public where they should feel safe”.

They continued: “These acts are never OK: they are assault, sexual assault and sexual harassment and are no way anyone should be treated in society.

“We all need to call it out, report it, keep raising awareness, and keep protesting to ensure the inequality isn’t forgotten about or dismissed.”

Reclaim These Streets is a national movement campaigning to make the streets safer for women.

Co-founded by activist, Jamie Klinger, the movement works to examine and address male violence against women at the source, by educating people about challenging everyday misogyny.

Thursday’s event in Canterbury was organised by a pool of students including Meg Payne, Rhian Shillabeer and Harry McKenzie.

The march set off at 6.30 pm from the Marlowe Theatre in Canterbury’s centre, before heading onto the bustling high street, through a popular public garden and it ended with a two-minute silence outside the city’s famous Cathedral gates.

During the demonstration, speeches were made by guest speakers, including Samantha Griffin, the cousin of PCSO Julia James, 53, who was killed while out walking her dog in a Kent hamlet in April.

Ms Shillabeer, of Reclaim These Streets, said: “We’re here to stand up for women and girls who have been victimised, and have experienced harassment and felt unsafe.”

Fellow organiser Ms Payne added: “A lot of the problem stems from attitudes about lower-level harassment – so cat-calling, wolf-whistling.

“It’s something I’ve experienced on the street, in clubs. You feel like you can’t stand up for yourself because you don’t know what’s going to happen to you.

“We should be able to stand up for ourselves – make people know that that’s not right.”

Kent County Councillor Alister Brady, who joined the march in support of the cause said: “As a male, I think it’s incredibly important that we understand that we are part of the problem.

“We can be a solution. We can call out misogynistic behaviour.”

The city’s Labour candidate continued: “It’s really important that males come on these marches, to shine a light on the fact that women aren’t safe on our streets. We’re in the third decade of the 21st century, and that’s unacceptable.”

The march happened after nightclubs and bars across the country were boycotted following a surge of reported drink spiking, with worried campaigners saying there is a “lack of concern being show by local clubs and the government” about the recent increase in incidents.